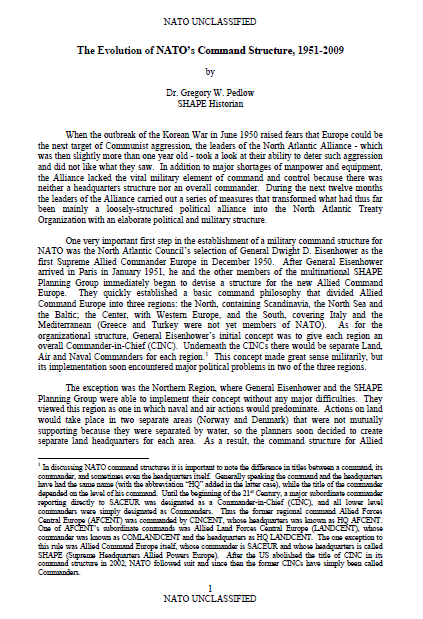 When the outbreak of the Korean War in June 1950 raised fears that Europe could be the next target of Communist aggression, the leaders of the North Atlantic Alliance – which was then slightly more than one year old – took a look at their ability to deter such aggression and did not like what they saw. In addition to major shortages of manpower and equipment, the Alliance lacked the vital military element of command and control because there was neither a headquarters structure nor an overall commander. During the next twelve months the leaders of the Alliance carried out a series of measures that transformed what had thus far been mainly a loosely-structured political alliance into the North Atlantic Treaty Organization with an elaborate political and military structure.

One very important first step in the establishment of a military command structure for NATO was the North Atlantic Council’s selection of General Dwight D. Eisenhower as the first Supreme Allied Commander Europe in December 1950. After General Eisenhower arrived in Paris in January 1951, he and the other members of the multinational SHAPE Planning Group immediately began to devise a structure for the new Allied Command Europe. They quickly established a basic command philosophy that divided Allied Command Europe into three regions: the North, containing Scandinavia, the North Sea and the Baltic; the Center, with Western Europe, and the South, covering Italy and the Mediterranean (Greece and Turkey were not yet members of NATO). As for the organizational structure, General Eisenhower’s initial concept was to give each region an overall Commander-in-Chief (CINC). Underneath the CINCs there would be separate Land, Air and Naval Commanders for each region. This concept made great sense militarily, but its implementation soon encountered major political problems in two of the three regions.

The exception was the Northern Region, where General Eisenhower and the SHAPE Planning Group were able to implement their concept without any major difficulties. They viewed this region as one in which naval and air actions would predominate. Actions on land would take place in two separate areas (Norway and Denmark) that were not mutually supporting because they were separated by water, so the planners soon decided to create separate land headquarters for each area. As a result, the command structure for Allied Forces Northern Europe (AFNORTH) consisted of an overall Commander-in-Chief (CINCNORTH) with four subordinate commands: Allied Air Forces Northern Europe (AIRNORTH), Allied Naval Forces Northern Europe (NAVNORTH), Allied Land Forces Norway (LANDNORWAY), and Allied Land Forces Denmark (LANDDENMARK).

Devising command arrangements in the vital Central Region, which contained the bulk of NATO’s forces, proved to be much more complicated. General Eisenhower considered naming an overall CINC there as well but soon realized it would be difficult to find an arrangement that would satisfy all three major powers with forces in the Center – the United States, United Kingdom and France – because they had strongly differing views on the proper relationship of air and ground power. Drawing upon his World War II experience, Eisenhower decided to retain overall control himself and did not appoint a CINC for the Central Region. 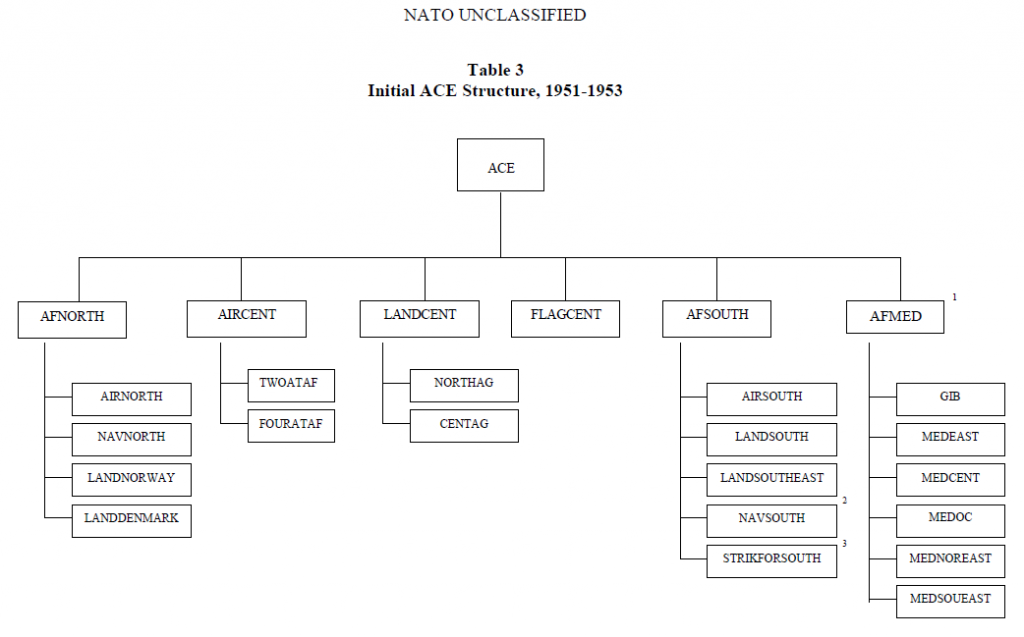