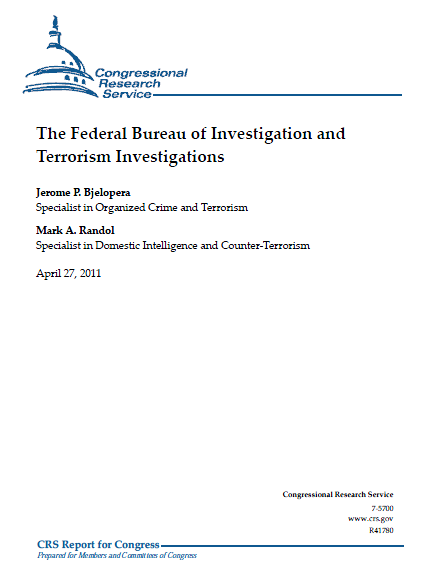 The Federal Bureau of Investigation (FBI, the Bureau) is the lead federal law enforcement agency charged with counterterrorism investigations. Since the September 11, 2001 (9/11) attacks, the FBI has implemented a series of reforms intended to transform itself from a largely reactive law enforcement agency focused on investigations of criminal activity into a more proactive, agile, flexible, and intelligence-driven agency that can prevent acts of terrorism.

This report provides background information on key elements of the FBI terrorism investigative process based on publicly available information. It discusses

• several enhanced investigative tools, authorities, and capabilities provided to the FBI through post-9/11 legislation, such as the USA PATRIOT Act of 2001; the 2008 revision to the Attorney General’s Guidelines for Domestic FBI Operations (Mukasey Guidelines); and the expansion of Joint Terrorism Task Forces (JTTF) throughout the country;
• intelligence reform within the FBI and concerns about the progress of those reform initiatives;
• the FBI’s proactive, intelligence-driven posture in its terrorism investigations using preventative policing techniques such as the “Al Capone” approach and the use of agent provocateurs; and
• the implications for privacy and civil liberties inherent in the use of preventative policing techniques to combat terrorism.

This report sets forth possible considerations for Congress as it executes its oversight role. These issues include the extent to which intelligence has been integrated into FBI operations to support its counterterrorism mission and the progress the Bureau has made on its intelligence reform initiatives. In addition, these issues will also be relevant during confirmation hearings for a new director. The statutory 10-year term of current FBI Director Robert S. Mueller III expires in September 2011. A new director will be subject to Senate confirmation.

In general, police officers serving a warrant must “knock and announce”—that is, give the subject notice that they are the police and are serving a warrant. They may enter and search even if the subject is not present at the premises to be searched, but they must leave a copy of the warrant and an inventory of what was seized, giving notice that the premises was searched.

The USA PATRIOT Act amended Title 1833 to allow federal law enforcement officers to request from the courts a delayed-notice (so-called “sneak and peek”) search warrant allowing officers to enter and search a premises without immediately notifying the owner when such notice may have an adverse result (e.g., tipping off a suspect or co-conspirators).

This authority has been used rarely in terrorism cases. In the three years for which data are available (October 1, 2006-September 30, 2009), the Director of the Administrative Office of the United States Courts reported to Congress that 2,332 delayed-notice search warrant requests were made. Drug-related offenses accounted for 1,618 (69.4 %) of these. The next largest category of offense for such warrants was fraud (122 warrants, 5.2%). Fifteen requests (less than 1%) were made for terrorism cases.