The Global Economy and Oil Markets: Developments and Prospects 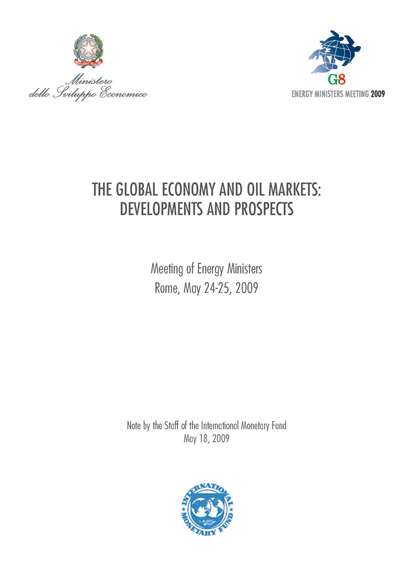 · After sharp price run-ups through mid-2008, the commodity price boom ended abruptly with the financial crisis and the onset of the global downturn. The collapse of commodity prices largely reflected much weaker demand prospects, with financial factors playing a secondary role.

· With falling demand and production cuts lagging behind, the oil supplydemand balance turned around in the second half of 2008, resulting in increasing inventories, collapsing spot prices, and upward-sloping oil futures curves.

· In line with broad commodity market developments, oil prices have rebounded in recent months on signs that the global contraction will hit bottom soon. As the global economy recovers, oil prices are expected to continue rising, with risks of a renewed price surge in the near term limited by comfortable spare capacity levels and inventory buffers.

I. COMMODITIES MARKETS AND THE GLOBAL RECESSION1

The financial turmoil and the associated sharp deterioration in global economic conditions led to an abrupt turnaround in commodity demand and a commodity price collapse in the second half of 2008. In recent months, commodity prices have rebounded on signs that the global contraction will hit bottom soon. The financial crisis abruptly ended the commodity price boom of the past few years. Commodity prices turned down in mid-2008 when incoming data indicated a stronger-thanexpected slowing of activity in both advanced emerging economies. The sharp deterioration in global growth prospects associated with the global financial turmoil during September and October led to accelerated downward price adjustment through November, with volatility rising to unprecedented levels for many major commodities. By December, the IMF commodity price index was almost 55 percent below its July peak.

The commodity price collapse largely reflected the stronger-than-expected downturn in activity. Most important, expectations that emerging and developing economies would remain resilient to slowing growth in advanced economies were disappointed. Because these economies had accounted for the bulk of incremental demand during the boom, near-term demand prospects in global commodity markets were seriously damaged. In addition, while advanced economies only accounted for a small share of the demand increases during the boom, they have accounted for most of the fall in the levels of global commodity consumption in recent months. Following past cyclical patterns, commodities closely tied to the manufacturing of investment and durable goods, and to construction—particularly fuels and base metals—have been most affected by the global recession. Commodity prices broadly stabilized in December 2008 and have rebounded in recent months on expectations that the global recession is bottoming out. Since March 2009, some better-than-expected U.S. data and signs that growth in China has picked up have provided a broad boost to commodity prices, with additional impetus from the effective U.S. dollar depreciation in recent weeks.

Financial stress contributed to accelerated commodity price declines last fall, but the related momentum was short-lived. Increased risk aversion, refinancing difficulties, and weaker prospects prompted a substantial unwinding of commodity asset positions during the global financial turmoil of September and October of 2008. This unwinding led to a noticeable reduction in overall open interest on U.S. commodity futures exchanges, including that of noncommercial participants, and to a decline in commodity assets under management.  As a result, liquidity in commodity futures markets declined, thereby amplifying price
volatility. The momentum in the unwinding was short-lived, however, and commodity financial markets stabilized in December 2008. In recent months, broad investor interest in commodity positions has picked up in the context of a general strengthening in the demand for risky assets.