The Most Technologically Secure Super Bowl Ever

httpv://www.youtube.com/watch?v=Dbjc4XNpGUs
A 2010 report from CBS discusses safety measures being taken for Super Bowl XLIV in Florida.

If you watch the Super Bowl next Sunday, between the commercials and the elaborate half-time show, take a moment to to think about the one aspect of the event that you will not see: the massive deployment of federal and local law enforcement resources to achieve what is already being called “the most technologically secure Super Bowl in the history of the Super Bowl.”  The game, which will take place February 5 at Lucas Oil Stadium in Indianapolis, will be secured by an unprecedented number of measures including dozens of newly-installed night-vision cameras, mobile gamma-ray scanners and a $18 million fusion center staffed with officials from various federal agencies and the military.

Here’s some of the measures being deployed by federal and local officials to secure this year’s Super Bowl:

Local network WRTV reports that the Department of Homeland Security is sending an unspecified number of gamma-ray cargo and vehicles scanners to secure Lucas Oil Stadium in Indianapolis.  The Mobile Vehicle and Cargo Inspection Systems (VACIS) are produced by defense contractor Science Applications International Corporation and can reportedly see through six inches of steel to reveal the contents of large vehicles.  Customs and Border Protection Officer Brian Bell told WRTV, “We can detect people, handguns and rifles . . . You’d be a fool to bring something into that stadium that you shouldn’t. We’re going to catch it. Our goal is to look at every vehicle that makes a delivery inside the stadium and inside the secure perimeter. We are looking for anything from explosives, to weapons, anything contrary to law.”

The various federal and local officials operating the gamma-ray vehicle scanners on-site at the stadium will be located in a 51-foot Featherlite trailer being lent to the Marion County Department of Homeland Security by Verizon.  The $1 million trailer was designed by Verizon as a mobile command center for disaster response and will be staffed with Customs and Border Protection Officers and others assisting in the screening of cargo and vehicles entering Lucas Oil Stadium. 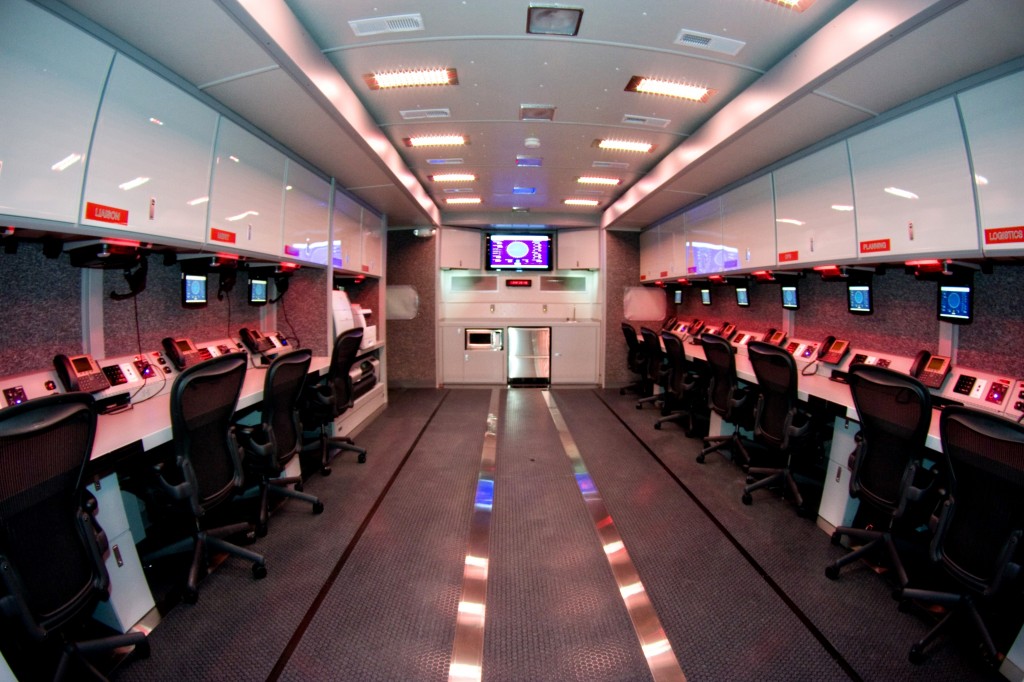 A view from inside a $1 million mobile command center created by Verizon that will be deployed to Lucas Oil Stadium in Indianapolis.

Since 2010, Indianapolis has experienced a series of underground utilities explosions that have turned manhole covers into projectiles damaging property and vehicles.  Over the last two months, the city has spent $150,000 installing “Swiveloc” locking manhole covers that  “can be locked for security reasons during the Super Bowl. In case of an explosion, the covers lift a couple of inches off the ground — enough to vent gas out without feeding in oxygen to make an explosion bigger — before falling back into place”.

Local network WRTV reports that more than 75 cameras will be installed in Indianapolis in and around Lucas Oil Stadium for Super Bowl security.  The cameras have reportedly been installed by crews from the Department of Homeland Security and the FBI.  The agencies will monitor the cameras from multiple locations, including the new Regional Operations Center that will act as a fusion center for coordinating event security throughout the local and federal agencies.  The high-definition, night vision cameras will hook into a network with the police cameras that are already installed around Indianapolis and will be accessible via the internet to all police and security officials. Brigadier General Stewart Goodwin, a spokesman for the Indiana War Memorial which controls many of the existing cameras, told WRTV, “If you had the right (Internet) address, you could set up a laptop anywhere and you could watch the camera from there.”  WDRB also reports that cameras will be placed on moving cars, mobile pods and helicopters during the Super Bowl.

Local news reports from WISH and the Indianapolis Star indicate that a newly constructed $18 million Regional Operations Center (ROC) for the Marion County Department of Homeland Security will serve as a fusion center for coordinating the various federal agencies involved in providing security for the Super Bowl.  The ROC is located in a former shopping mall and features a 50-foot wall of video screens to monitor more than 85 cameras cameras around Indianapolis.  According to media reports, the FBI, the Department of Homeland Security and the Federal Aviation Administration will reportedly be running Super Bowl security operations from this location.  However, because the Super Bowl has been officially designated as a National Security Special Event (NSSE) for nearly a decade, it is safe to assume that the U.S. Secret Service will be leading the operation and elements of the military will be present in the fusion center.  A threat assessment for last year’s Super Bowl indicated the participation of U.S. Northern Command and the National Geospatial-Intelligence Agency.