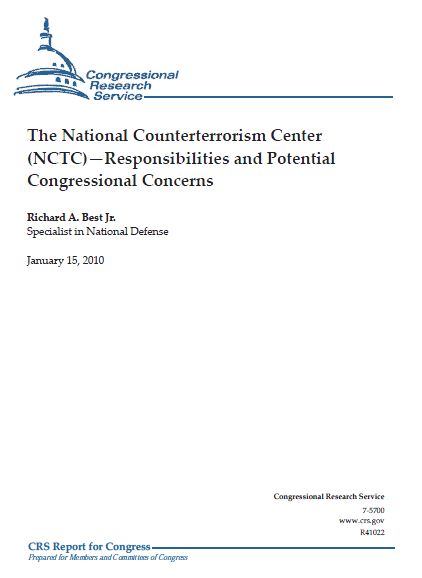 The National Counterterrorism Center (NCTC) was established in 2004 to ensure that information from any source about potential terrorist acts against the U.S. could be made available to analysts and that appropriate responses could be planned. Investigations of the 9/11 attacks had demonstrated that information possessed by different agencies had not been shared and thus that disparate indications of the looming threat had not been connected and warning had not been
provided. As a component of the Office of the Director of National Intelligence, the NCTC is composed of analysts with backgrounds in many government agencies and has access to various agency databases. It prepares studies ranging from strategic assessment of the future terrorist
threats to daily briefings and situation reports. It is also responsible, directly to the President, for
planning (but not directing) counterterrorism efforts. The NCTC received a statutory charter in
the Intelligence Reform and Terrorism Prevention Act of 2004 (P.L. 108-458); it currently
operates with a staff of some 600 analysts from a headquarters in northern Virginia. The Senate
must consent to the appointment of the NCTC Director.

Two recent incidents—the assassination by an Army Major of some 13 individuals at Fort Hood
Army Base on November 5, 2009 and the failed attempt to trigger a bomb on an airliner
approaching Detroit on December 25, 2009—led to increased concern about counterterrorism
capabilities domestically and internationally. An Executive Branch assessment of the December
bombing attempt concluded that, whereas information sharing had been adequate, analysts had
failed to “connect the dots” and achieve an understanding of an ongoing plot. Attention has
focused on the NCTC which is responsible for ensuring both the sharing of information and for
all-source analysis of terrorist issues.

For the first time, NCTC had a statutory charter. P.L. 108-458 sets forth the duties and
responsibilities of the NCTC Director:

• to serve as principal adviser to the DNI on intelligence operations relating to
terrorism;

• to provide strategic operational plans for military and civilian counterterrorism
efforts and for effective integration of counterterrorism intelligence and
operations across agency boundaries within and outside the US;

• to advise the DNI on counterterrorism programs recommendations and budget
proposals’

• to disseminate terrorism information, including current terrorism threat analysis,
to the President and other senior officials of the Executive Branch and to
appropriate committees of Congress;

• to develop a strategy for combining terrorist travel intelligence operations and
law enforcement planning and operations;

• to have primary responsibility within the Government for conducting net
assessments of terrorist threats; consistent with presidential and DNI guidance,
to establish requirements for the Intelligence Community in collecting terrorist
information.

The NCTC is to contain a “Directorate of Intelligence which shall have primary responsibility
within the United States Government for analysis of terrorism and terrorist organizations (except
for purely domestic terrorism and domestic terrorist organizations) from all sources of
intelligence, whether collected inside or outside the United States.”10The Intelligence Reform Act
and Terrorism Prevention Act of 2004 also tasked the NCTC Director with undertaking strategic
operational planning for counterterrorism operations. The statute specifies that strategic planning
is to include the mission, objectives to be obtained, tasks to be performed, interagency
coordination of operational activities, and the assignment of roles and responsibilities.11 However,
NCTC may not direct the execution of such operations.12 In carrying out these planning
responsibilities the NCTC Director is responsible statutorily to the President rather than the DNI.
These unusual dual reporting responsibilities might lead to a situation in which the NCTC
director could recommend policies to the President specifically opposed by the DNI.
The extent of NCTC’s planning responsibilities are unclear. The legislation did not repeal the
authorities of other agencies to collect counterterrorism intelligence or prepare for
counterterrorism operations. NCTC can prepare and obtain approval for counterterrorism plans,
but it cannot ensure implementation. Some observers have expressed concern that DOD’s own
planning responsibilities under Title X of the US Code could be complicated by the NCTC role.

The Executive Branch is undertaking several investigations of the Fort Hood shooting and the
December 25 airline attack. The reports may indicate organizational problems or individual
malfeasance and Congress may choose to review those investigations. However, there may also
be interest in a wider-ranging assessment of the role of various agencies and how they work
together. In particular, Congress may act to review the statutory framework that created the
NCTC in 2004 and how the Center has functioned in the years since. In particular, Congress may
wish to satisfy itself that the NCTC has access to all appropriate information and intelligence. It
may wish to assure itself that detaillees to the NCTC from other agencies are highly qualified and
committed to the Center’s mission and do not see their role as protecting their agency’s
bureaucratic equities. Congress may wish to assess the availability of adequate technologies at
NCTC for accessing and sharing information.

Although significant efforts have been made to remove the “wall” between law enforcement and
intelligence, there may be residual barriers especially those resulting from separate bureaucratic
cultures. As in the case of Major Hassan the natural tendency to avoid over-involvement in law
enforcement or the personnel policies of a cabinet department may have influenced the handling
of information relating to contacts between a US person and a suspected terrorist in another
country. Concern has also been expressed that NCTC might rely on authorities available to
foreign intelligence agencies that do not encompass the restrictions on domestic intelligence
gathering and law enforcement operations and that this approach may jeopardize privacy rights.22
Congress might seek additional information on NCTC policies regarding privacy rights of US
persons.

Congress exerts its greatest influence through authorization and appropriations legislation.
However, NCTC is not a large collection agency and its relatively small budget goes mainly for
personnel expenses. Some in Congress may find the number of NCTC personnel either excessive
or inadequate, but changes in the number of positions would affect the NCTC budget but in
relatively small amounts in comparison to the $49+ billion budget for all national intelligence
programs. Some observers have argued that NCTC’s information technology capabilities need to
be enhanced, but it is unlikely that the budgetary implications would be dramatic.