Think Like the Enemy: The U.S. Military’s Terrorist Training Exercise 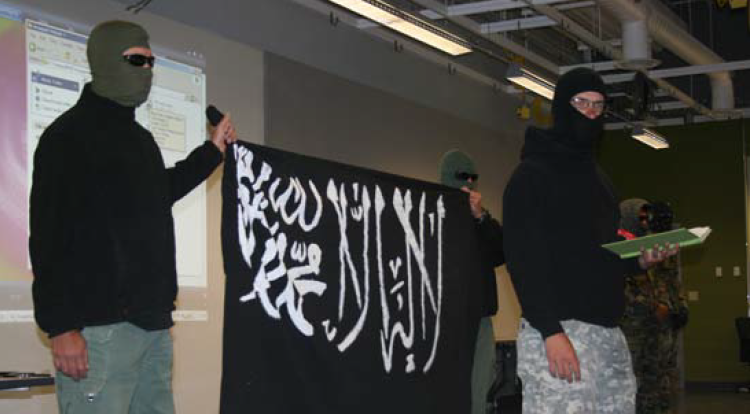 A photo from the CODIAC training guide depicting military trainees participating in a "think like the enemy" exercise. The caption reads: "Trainees carry out this exercise as if they were radical Islamic terrorists; they attempt to recruit the class to join their jihad."

A U.S. military training program designed to enhance soldiers’ abilities to operate in irregular conflicts includes exercises which encourage soldiers to think like terrorists in order to examine opposing ideologies.  The exercises are part of a course designed to help trainees with practical decision-making skills in “irregular conflicts” and counterinsurgency called Combat Observation and Decision-making in Irregular and Ambiguous Conflicts (CODIAC).  The course was initially created in 2010 as a way of enhancing the “ability of individuals and small teams to address irregular challenges by training enhanced observation, battlefield sensemaking, human terrain pattern recognition, and environmental analysis (including knowledge of combat tracking).”  The CODIAC course incorporates curriculum from a number of other military programs, including the U.S. Marine Corps’ Combat Hunter program, and it is designed to primarily for military personnel as well as “interagency paramilitary personnel, such as Border Patrol or Police Officers, as well as multinational allies.”  The course focuses on a number of core subject areas related to decision making, intelligence and observation, physical tracking and “human terrain” analysis.

One particular section in Unit 4 of the course focuses entirely on a concept that is described as “combat profiling, which involves utilizing observation and analysis to obtain a greater understanding of one’s enemy.”  In order to fully understand the roots of terrorism, the section titled “Think Like the Enemy” advocates mental experiments designed to put the trainee into a terrorist’s mindset.  This involves “looking at the world through their eyes, walking in their shoes, and having a day in their skin” in order to understand the roots of their radicalism.  Trainees are asked to consider terrorist groups’ manifestos and iconography as a reflection of their recruitment messages and fundamental motivations.  Trainees are then asked to engage in an exercise where they are divided into teams and asked to form their own hypothetical terrorist group.  Each group must consider what their fundamental ideology and message is, complete with a terrorist “brand” that is designed to win the “hearts and minds” of their classmates.

Following a brief overview of terrorist planning techniques and procedures, CODIAC trainees are asked to “Plan Like the Enemy” by constructing their own hypothetical terrorist attacks.  After being divided into teams, trainees are assigned “a real-world terrorist organization” for which they will “seek out a real-world target for their fictional terrorist attack.”  The teams are encouraged to consider the logistics of the attack: how it is to be conducted, how supplies are to be acquired and how it is to be financed.  The training guide encourages instructors to “give trainees sufficient time to plan and research their attacks” and “ask them to create concept-diagrams of their operations” including videos or photos of their potential target, as well as drawings of their target’s layout.  Trainees are then asked to give a fifteen-minute presentation to the rest of the class describing their hypothetical terrorist attack, including “why this target, and its attack plan, offer the highest cost-to-benefit ratio for the terrorist group.”  After all of the presentations are complete, the class is asked to select the “optimal target” from all of the teams’ proposals.  The “hypothetical attacks” are then used for discussion purposes following the exercise’s completion, examining how such attacks could potentially be thwarted or prevented entirely.

Excerpts from the CODIAC Course: 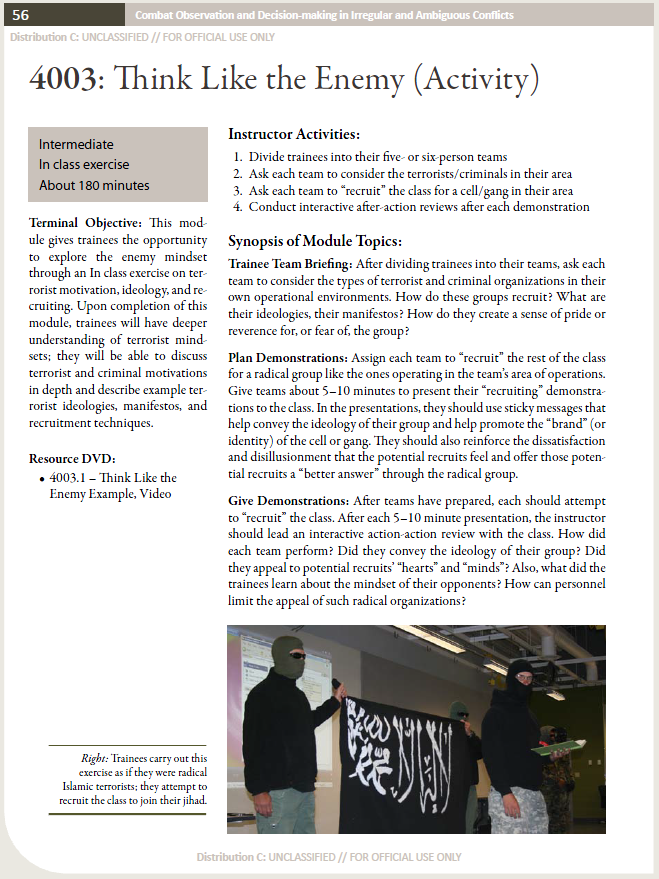 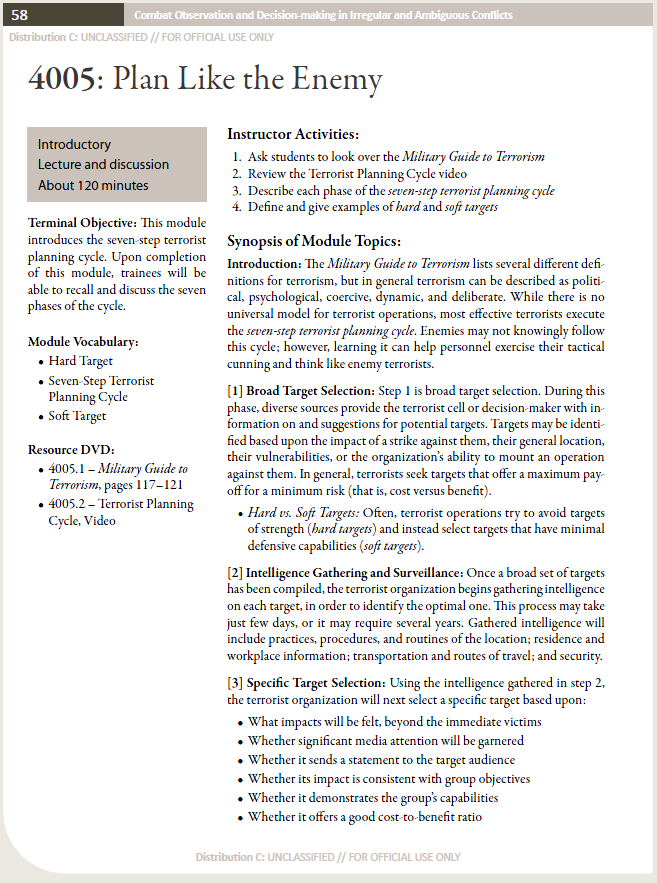 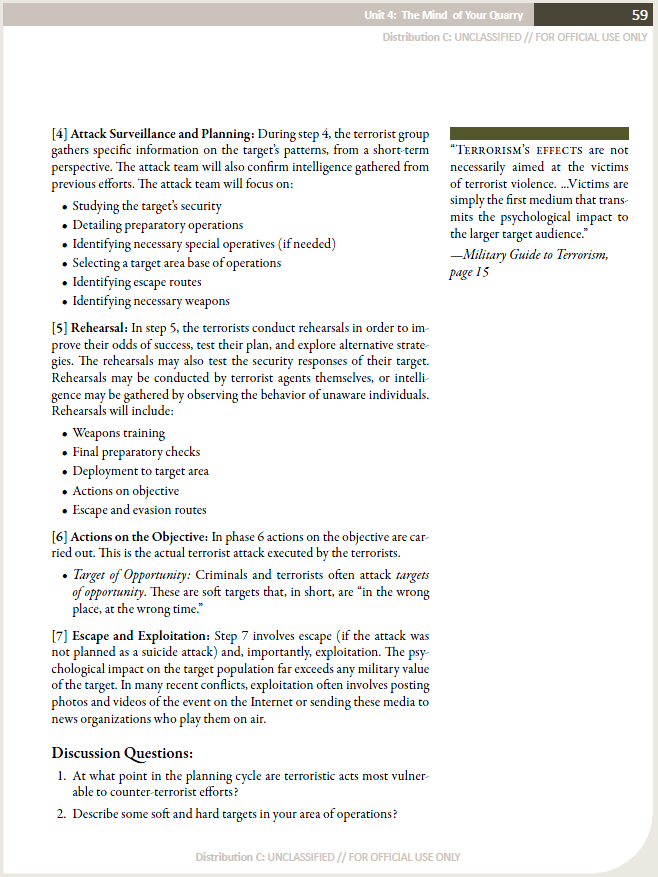 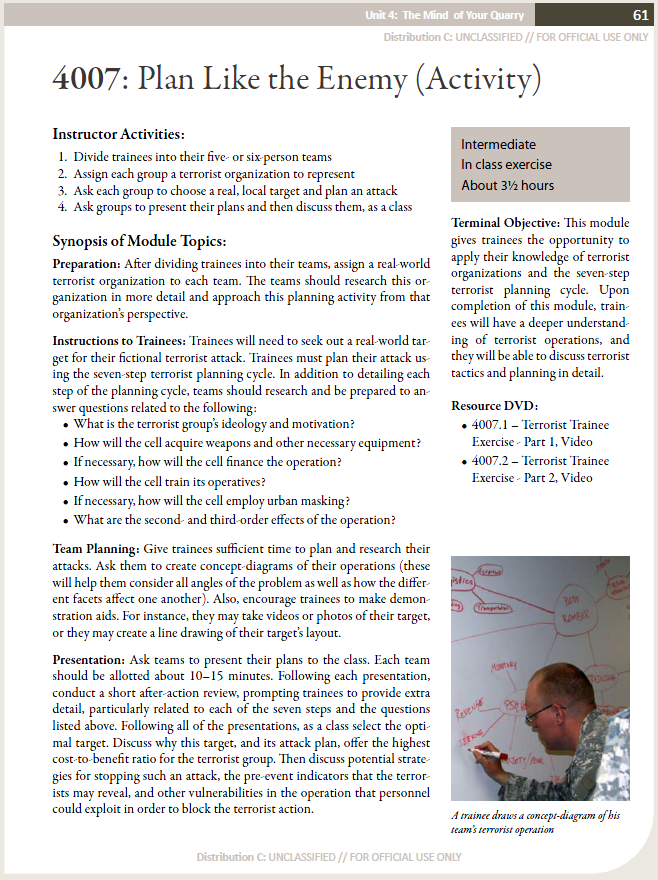