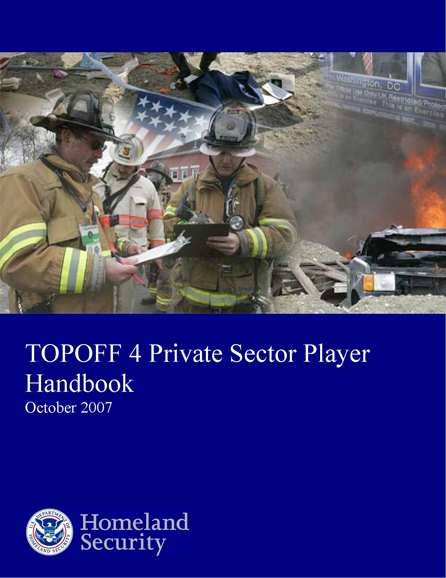 The T4 FSE is a 10-day exercise involving the states of Arizona and Oregon, the Territory of Guam, various federal departments and agencies, the countries of Australia, Canada, Mexico and the United Kingdom and the private sector to achieve their training and exercise objectives.

During the T4 exercise, Guam and the State of Oregon (Portland) will play a full-scale exercise; Arizona will play a Command Post Exercise.

The intelligence buildup will occur 60 days prior to the start of the exercise (STARTEX). Private sector players should assume five business days of activity following the first exercise “incident.” We expect private sector play will actively occur from October 16-18, 2007 during normal business hours.

The exercise poses politically sensitive issues and may portray detailed response plans and potential response shortcomings. Planners and participants must treat exercise-related information as sensitive and FOR OFFICIAL USE ONLY

1. Exercise procedures and protocols required for timely information flow between the Intelligence Community ( IC ) and relevant CI/KR owners and operators during the prevention, response, and recovery phases of a crisis/emergency including:

• Tactical intelligence warnings and alerts from the IC to affected CI/KR decision makers;

• Tactical information from CI/KR participants to affected state, territory, and national fusion centers ( including HITRAC ); and

2. Test emergency/crisis communications capabilities (e.g. GETS, WPS, CWIN) recognizing and acknowledging the inevitable adverse impact on traditional communications capabilities in the event of an incident of national significance. This will be particularly significant for first responders, health care providers, incident command post, JFO, and others during the various phases of the response, recovery, and reconstitution efforts. Given historical lessons learned, it may be valuable to utilize time intervals in the development of the injects ( 1st four hours following detonation; 1st 12 hours; 1st 24 hours; etc )

3. Test alternative information sharing capabilities recognizing and acknowledging the inevitable adverse impact (loss of access, degradation of service, etc) to traditional access during an incident of national significance. This again will be particularly relevant to first responders, command post leadership, JFO, law enforcement, health care providers, and others during the various phases of the response, recovery, and reconstitution efforts.

5. Test the provisions of the NRP, NIMS, and respective ESF plans as it relates to actual declaration of an incident of national significance and determination of clarity and predictability regarding the triggering of the Stafford Act, Defense Production Act, et al, and what that actually means in terms of the availability of resources in the event of a crisis/emergency.

6. Test the issues of onsite access and security (credentialing, authentication, etc) for CI/KR professionals that may be necessary to evaluate damage, effect repairs, or stand up interim provisions during a crisis/emergency. Given the nature of this scenario, this objective will have both venue and national-level implications.