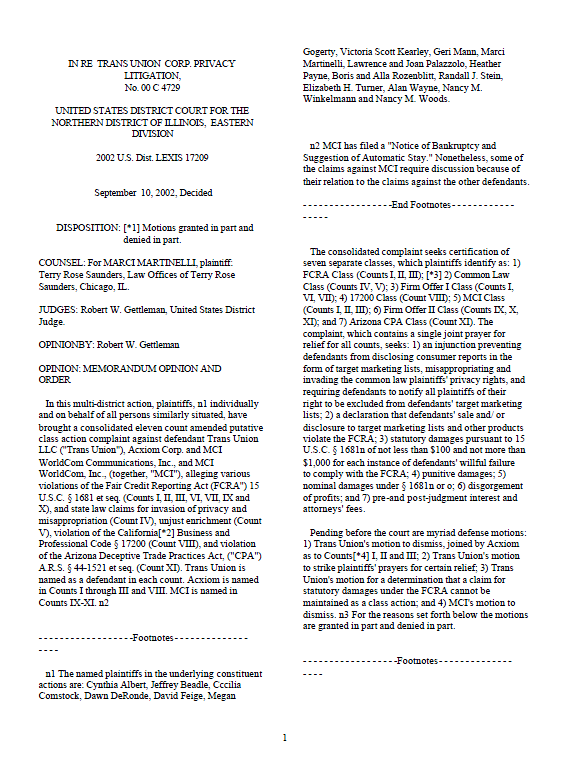 Defendant Trans Union is one of three major consumer reporting agencies in the United States. Its core business is assembling and evaluating consumer credit information, including credit and payment patterns on consumers for the purpose of selling consumer reports to third parties. Typical buyers of such information are firms considering extending credit to a particular consumer. The information provided by Trans Union is used to determine if the consumer is a good credit risk.

Every credit-active person has a “record” in CRONUS, which includes the consumer’s name and address. Additional consumer credit information is listed in a “tradeline.” A tradeline is a segment of a credit report reflecting a credit relationship between the consumer and a creditor. Tradeline information includes customer account numbers, telephone numbers, social security numbers, open dates, credit grantors’ names, types of loans, credit limits, payment history, and dates the accounts are closed. Each consumer’s file includes all tradelines for that consumer.

In addition to selling “credit reports” used by customers to help determine whether a consumer is eligible for personal, family or household credit or insurance, Trans Union also has a division that[*6] distributes, sells, leases and/ or rents “target marketing” lists to third parties. This division, first called TransMark, then Trans Union Lists, and now Performance Data, uses data from Trans Union’s CRONUS to create mailing lists. Trans Union then sells these lists to its target marketing customers, which include catalog companies, newspaper and magazine subscription vendors, firms using mail solicitation or telemarketing, and target marketing list brokers, managers, and wholesalers. The target marketers sell or advertise goods and services directly to consumers by mail or telephone. The consumers are picked by criteria including financial or credit related criteria.

From its CRONUS data base, Trans Union creates a master file which includes a Base List. Since January 1998, to be included within the master file, a consumer CRONUS file must include two tradelines active within the last six months. The tradeline must not be a collection or public record. Any consumer with no activity in a twelve month period is dropped. TransUnion’s promotions state that the master file contains a list of 135 million individuals.

There at least two ways for Trans Union customers to utilize the[*7] master file information. Some customers provide a list of consumers to Trans Union and purchase the master file credit or financial information regarding those customers. Other customers get a list from Trans Union of the names and addresses of consumers who satisfy pre-selected criteria chosen by the customer. Some of the criteria or indicators available are: 1) open automobile loans; 2) open bank cards; 3) open department store cards; 4) open mortgages; 5) open student loans; and 6) mail order buyers.

The mailing list purchased by Trans Union customers are simply collections of names and addresses. Because, however, Trans Union has culled out names that did not satisfy the specified criteria, the customer knows additional information about each consumer on the list, including that each person on the list has at least two active credit accounts.

The complaint contains little information about Acxiom. According to plaintiffs, Trans Union is or has been the single largest shareholder of Acxiom and is or has been Acxiom’s second largest customer. According to plaintiffs, during the 1990s, Acxiom was “intricately involved in the operation of Trans Union’s target marketing business, [*8] and has substantially profited from the sale and disclosure of consumer’s private credit and other financial information. Defendant MCI provides cellular communications services and equipment to consumers. MCI purchased a mailing list from Trans Union for purposes of soliciting consumers, including plaintiff Comstock, to purchase wireless service. On or about March 13, 2000, MCI sent Comstock “an exclusive offer for preapproved wireless service.” Plaintiffs allege that the offer violates § 1681m(d) of the FCRA.