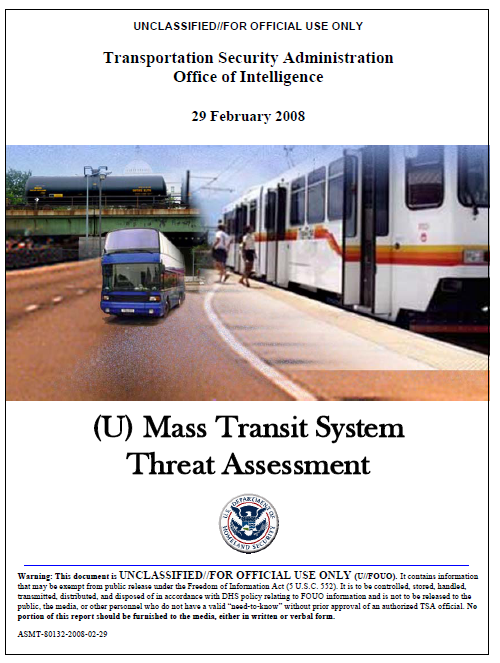 • (U//FOUO) The U.S. mass transit and passenger rail systems are vulnerable to terrorist attacks because they are accessible to large numbers of the public and are notoriously difficult to secure.

• (U//FOUO) Al-Qa’ida and affiliated extremists pose the greatest threat to the U.S. mass transit and passenger rail system. The threat to heavy and commuter rail in the Homeland is greater than the threat to buses and light rail. Attacks on buses overseas tend to be small-scale and are carried out mainly by smaller separatist groups within their own countries.

• (U//FOUO) Multiple improvised explosive devices (IEDs) and improvised incendiary devices (IIDs) are the most common means of attacking mass transit targets. Although homemade explosives are more likely to be used, chemical and biological attacks are also possible agents for terrorism.

• (U//FOUO) Based on assessments of previous al-Qa’ida and al-Qa’ida-inspired attacks, future attack plotting against mass transit would likely involve small groups of operatives exploding multiple IEDs on rail during rush hour in a major U.S. city.

• (U//FOUO) While there have been a number of reported suspicious incidents connected to mass transit, there is no evidence to date linking them to terrorism. Suspicious activity, however, can help law enforcement and security officials identify unusual behavior, trends, patterns, and possible criminal acts.

(U//FOUO) Although TSA-OI assesses that international terrorist groups pose the greatest threat to U.S. mass transit, it is possible that domestic terrorists could also carry out an attack against this sector. Domestic groups and individuals include, but are not limited to, right-wing militia, animal and environmental activists, disgruntled employees, and lone individuals. There have been numerous examples of domestic terrorism by lone individuals (lone wolves), such as the 1995 bombing of the Murrah Federal Building in Oklahoma City and the 1996 Centennial Olympic Park bombing.

(U//FOUO) IEDs were used in the majority of recent events against mass transit systems and will likely remain the most common method of attack for the foreseeable future. IEDs can be constructed from common materials, can be contained in inconspicuous bags or packages, and can be placed without attracting attention. Suicide operatives carrying IEDs could easily come aboard undetected, especially at a busy time of day when ridership is high.

(U//FOUO) According to an October 2007 Joint FBI-DHS report, terrorist interest in peroxide-based explosives is growing. Terrorists in the 7 July 2005 London bombings and the subsequent attempted bombings on 21 July 2005 used peroxide-based explosives, which included triacetonetriperoixde (TATP) and hexamethylenetriperoxidediamine (HMTD). The members of the Germany-based Islamic Jihad Union cell were in the process of purchasing large quantities of high-concentrate hydrogen peroxide when they were arrested in October 2007. Hydrogen peroxide is commercially available and easy to purchase, making it ideal for use in homemade explosives.12,13

(U//FOUO) IIDs are designed to cause fires or secondary explosions. Terrorists are aware that attacks with incendiary devices in subway systems cause passengers caught in narrow confines with smoke and fire to panic, causing additional injuries and obstructing rescue attempts. Such an attack would also draw in first responders, who could be the targets of a second-phase attack.

(U) Standoff Weapons and Small Arms

(U//FOUO) Rocket-propelled grenades, light anti-tank weapons, and small arms could be used to attack mass transit. An example is the 1993 incident in which a lone gunman opened fire with a 9mm pistol in a crowded Long Island Railroad commuter railcar.

(U//FOUO) Terrorists continue to have an interest in developing chemical and biological dispersion devices. Many of the necessary materials are relatively easy to acquire, and some delivery systems can be simple to build. The 1995 chemical attack on the Tokyo subway system was accomplished simply by piercing, with the tip of an umbrella, plastic bags containing sarin, which had been left on subway car floors.