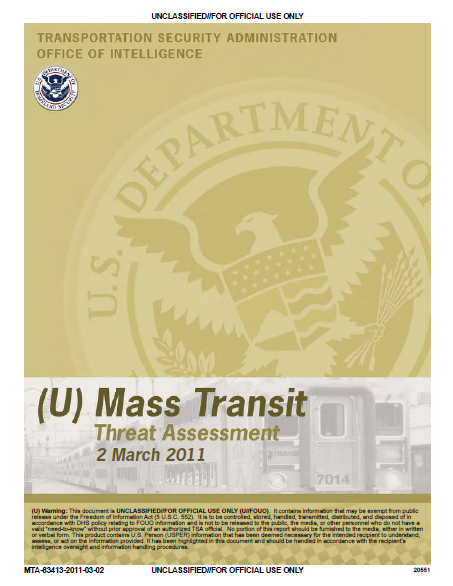 (U//FOUO) This Transportation Security Administration’s Office of Intelligence (TSAOI) annual Mass Transit Threat Assessment provides an overview of possible threats to the U.S. mass transit system, and presents conclusions regarding likely perpetrators, as well as their targets and weapons.

• (U//FOUO) Based on disrupted plots, TSA-OI assesses that AQ and its affiliates have demonstrated a continuing desire, intent, and capability to attack mass transit systems in the Homeland and remain the primary terrorist threat to the U.S. transportation industry.

• (U//FOUO) TSA-OI assesses that a terroristii attack against mass transit systems in the United States will most likely occur in a passenger rail car or station to generate fear and the greatest number of casualties.

(U//FOUO) Terrorist groups aligned or in consultation with AQ have shown intent or demonstrated the capability to attack or engage in planning attacks against U.S. mass transit systems. TSA-OI assesses that AQ and its affiliates are the primary threat to mass transit systems in the Homeland.

• (U//FOUO) May 2010: Faizal ShahzadUSPER was arrested in connection with a failed attack on Times Square in New York City. Shahzad admitted to law enforcement authorities that had his New York City’s Times Square attack been successful, he would have attacked other targets, including mass transit. Shahzad was trained for his attack by Tehrik-e Taliban Pakistan, a group allied with AQ.
• (U//FOUO) March 2010: In a video entitled “A Call to Arms,” AQ spokesperson Adam GadahnUSPER emphasized how even unsuccessful attacks on Western mass transportation systems could bring cities to a halt and cost billions in increased security measures.
• (U//FOUO) February 2010: Najibullah Zazi, a legal permanent resident of the United States from Afghanistan, admitted to bringing triacetone triperoxide (TATP) explosives to New York City in September 2009, as part of a plan to attack the New York City subway system. Zazi had previously traveled to Afghanistan and Pakistan to join the Taliban and fight against the United States and allied forces, and was recruited there by AQ to return to the United States and conduct a suicide bombing.

(U//FOUO) No U.S. domestic terrorist groups have expressed the intent to carry out an attack on U.S. mass transit systems.

(U//FOUO) During this reporting period, terrorists conducted attacks on a variety of rail and bus targets overseas, with the majority being against railroad tracks and bridges, and buses targeted from the outside. Sometimes a single operation included one or more targets (e.g., railcars were blown up inside a railway station or an IED damaged a bus stop and the bus).