The following document was obtained from the public website of an events trade group. 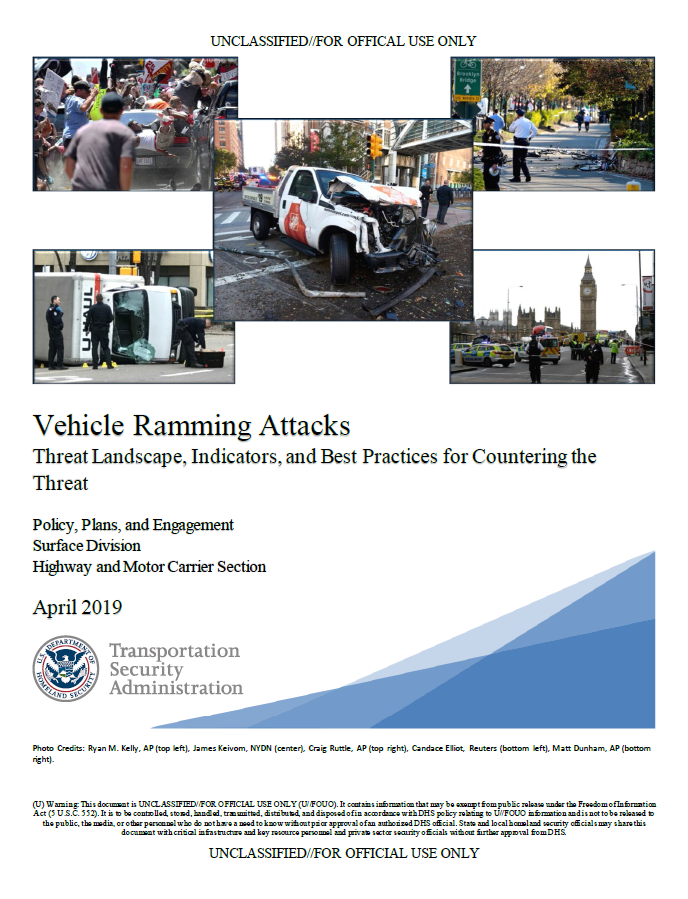 (U) Vehicle ramming is a form of attack in which a perpetrator deliberately uses a motor vehicle to strike a target with the intent to inflict fatal injuries or significant property damage.

(U) Based on our analysis of terrorist publications such as Rumiyah and observations of terrorism-inspired events worldwide, we believe terrorist organizations overseas have advocated conducting vehicle ramming attacks against crowds, buildings, and other vehicles, using modified or unmodified large-capacity vehicles. Such attacks could target locations where large numbers of people congregate, including sporting events, entertainment venues, shopping centers, or celebratory gatherings such as parades.

“Though being an essential part of modern life, very few actually comprehend the deadly and destructive capability of the motor vehicle and its capacity of reaping large numbers of casualties if used in a premeditated manner.”
Rumiyah Issue 3, Just Terror Tactics, 2016.

(U//FOUO) Vehicle ramming attacks are often unsophisticated, in that they require minimal planning and training. Terrorist groups continue to encourage aspiring attackers to employ unsophisticated tactics such as vehicle ramming because these types of attacks minimize premature detection and could inflict mass fatalities if successful. Furthermore, events that draw large groups of people—thus presenting an attractive vehicle ramming target—are usually scheduled and announced in advance, which greatly facilitates attack planning and training activities.

(U) In August 2018, a 29-year-old attacker drove into pedestrians and cyclists near London’s Houses of Parliament, injuring three persons in an event being investigated as a terrorist act. This apparent terrorist attack, as well as any additional attacks in 2018, will be more closely analyzed in the next issue of this report. 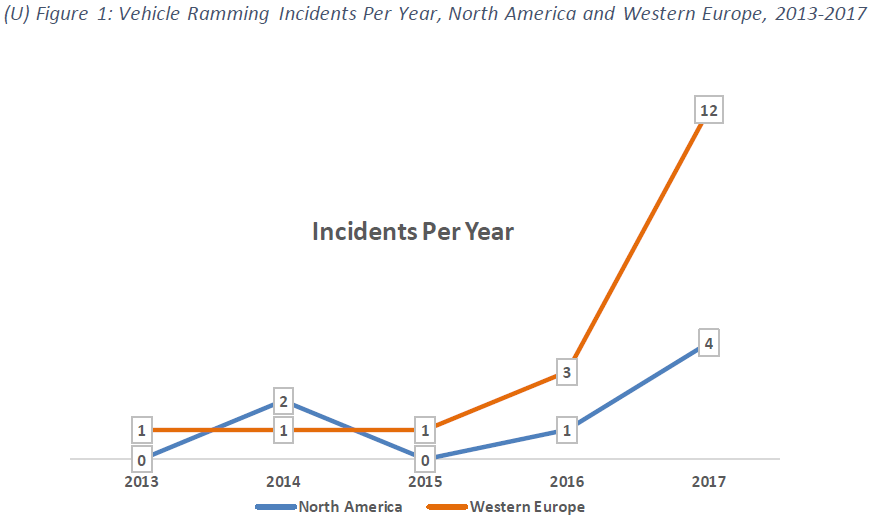 (U//FOUO) Large-capacity vehicles, specifically commercial trucks, rental trucks and vans, and buses, present an especially attractive mechanism for vehicle ramming attacks for several reasons: they are plentiful; arouse little or no suspicion because their presence around and access to structures and activity centers is expected; can easily penetrate security barriers4; and can inflict large-scale damage on people and infrastructure.

(U) TSA recommends vigilance and preparedness to prevent the use of large-capacity vehicles in terrorist attacks. Large-capacity vehicle owners and operators should alert their staff to possible theft or vehicle hijacking by would-be attackers, and emphasize the importance of reporting suspicious activities to appropriate authorities.

(U) Large-capacity vehicle owners and operators can also help their home communities’ business and law enforcement agencies by partnering to discuss the threat of vehicle ramming attacks and the security awareness, planning, and best practices that could mitigate the threat.

(U) Existing and emerging technologies can be used to mitigate and even prevent vehicle ramming incidents. For vehicles equipped with tracking devices, geo-fencing technologies can identify potential threats in proximity to high-value targets and, in some cases, activate vehicle shut-down. In addition, automatic collision-prevention devices are expected to become more prevalent as vehicle fleets gain newer replacement vehicles.

(U) No community, large or small, rural or urban, is immune to large-capacity vehicle ramming attacks by organized or lone offender terrorists. Good security is good business. TSA recommends you to take an active role in protecting your business and your community from this potential threat.