(U) Escalating Foreclosures Provide an Opportunity for Scammers 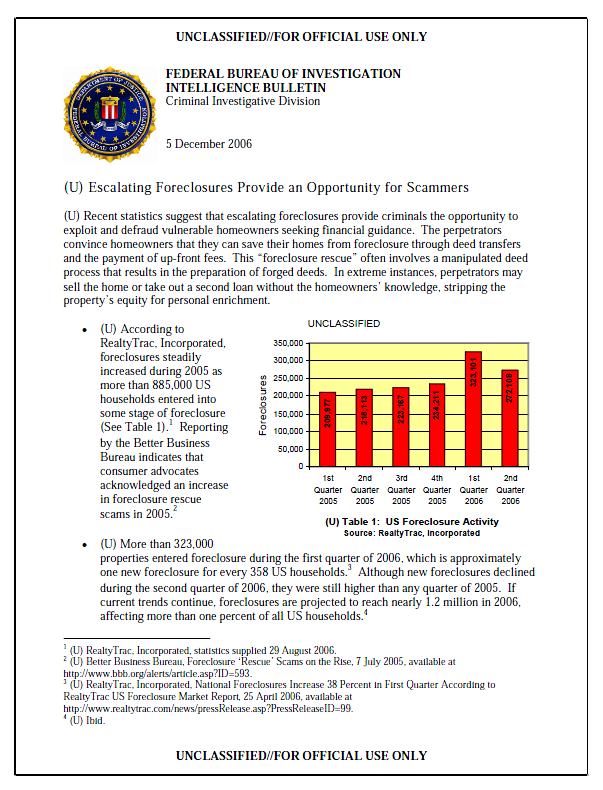 (U) Recent statistics suggest that escalating foreclosures provide criminals the opportunity to exploit and defraud vulnerable homeowners seeking financial guidance. The perpetrators convince homeowners that they can save their homes from foreclosure through deed transfers and the payment of up-front fees. This “foreclosure rescue” often involves a manipulated deed process that results in the preparation of forged deeds. In extreme instances, perpetrators may sell the home or take out a second loan without the homeowners’ knowledge, stripping the property’s equity for personal enrichment.

(U) According to RealtyTrac, Incorporated, foreclosures steadily increased during 2005 as more than 885,000 US households entered into some stage of foreclosure (See Table 1). Reporting by the Better Business Bureau indicates that consumer advocates acknowledged an increase in foreclosure rescue scams in 2005.

(U) In 2005 law enforcement identified a company that advertised success with “stopping foreclosure.” The company convinced a couple defaulting on their mortgage to allow them to purchase their home to avoid foreclosure. The company secured a mortgage loan for 100 percent of the home’s value, paid off the homeowners’ loan, and pocketed more than $200,000 in home equity. Although the company considered the money a “fee,” they manipulated the settlement statement to avoid lender questioning by disguising the fee as a payoff, thereby deceiving the lender into believing the sum was an outstanding loan instead of a fee. The couple tried to sell their dwelling to a third party to reimburse the company and save their equity, but could not because the home was not listed in their name.

(U) The National Consumer Law Center assesses that prominent foreclosure-rescue scams fall into three categories: “phantom help,” “bailout,” and “bait and switch.”6 Phantom help involves a perpetrator charging exorbitant fees for a minimal amount of assistance that does not result in saving the home. Eventually the perpetrators abandon the homeowners, who then must expend additional time and resources seeking qualified help. The bailout scheme occurs when homeowners transfer their homes into the perpetrator’s name with the understanding that they will remain in the homes as renters with the opportunity to eventually repurchase the home. However, the complicated terms of the transfer typically make the repurchase of the home impossible. Bait-and-switch occurs when the homeowners believe they are signing documents to make the mortgage current, but the documents actually surrender homeownership to the perpetrator.

(U) While foreclosure scams vary, they may be used in combination with other fraudulent schemes. For instance, perpetrators may view foreclosure-rescue scams as a new method for fraudulently acquiring properties to facilitate illegal property-flipping and equity-skimming. A continued increase in foreclosures will ultimately provide perpetrators with more opportunities to take advantage of homeowners. 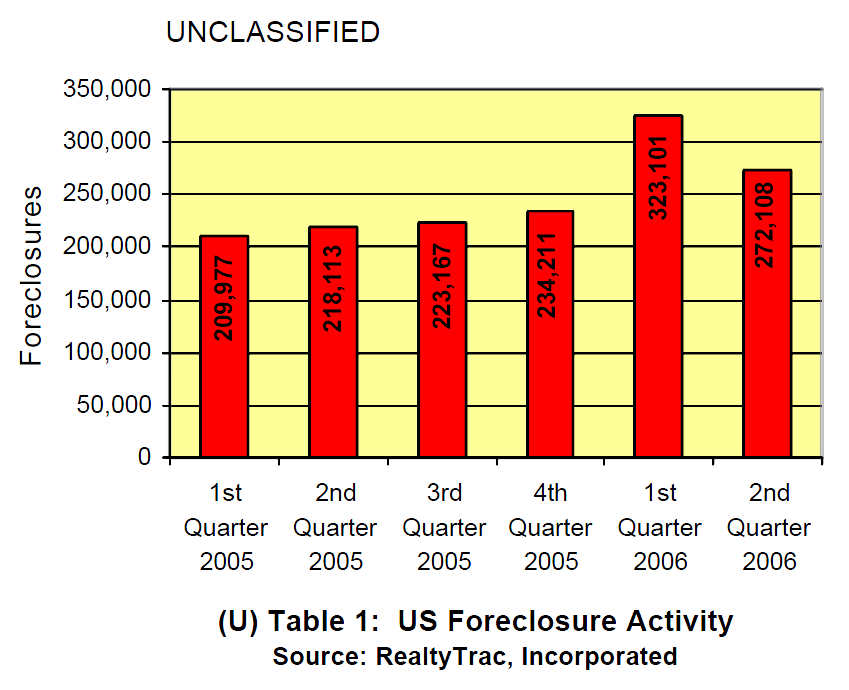