The following version of U.S. Army Regulation 525-13 was posted to a website associated with the State of Montana.  A previous version of the document was published by WikiLeaks in 2008. 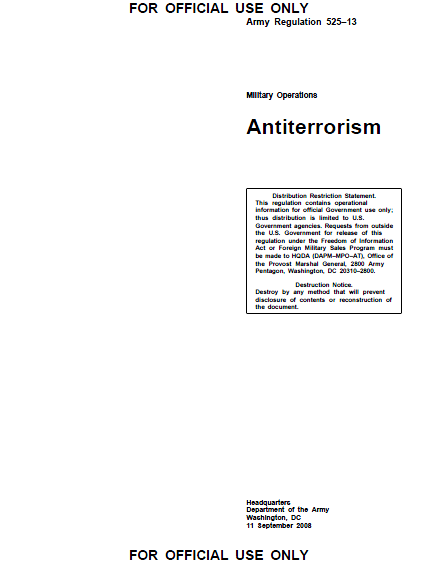 This regulation establishes the Army Antiterrorism (AT) Program to protect personnel (Soldiers, members of other Services, Department of the Army (DA) civilian employees, Department of Defense (DOD) contractors and Family members of DOD employees), information, property, and facilities (including civil work and like projects) in all locations and situations against terrorism. It provides—

a. Army standard 20. Commanders and heads of agencies/activities will include in AT plans terrorism incident response measures that prescribe appropriate actions for reporting terrorist threat information, responding to threats/actual attacks, and reporting terrorist incidents.

(1) Terrorist incident response measures in AT plans will, at a minimum, address management of the FPCON system, implementation of all FPCON measures, and requirements for terrorist related reports. Plans will be affordable, effective, and attainable; tie security measures together; and integrate security efforts by assigning responsibilities, establishing procedures, and ensuring subordinate plans complement each other. At the garrison level, the plans must tie into other installation response plans.

(2) At garrison level, commanders will identify high risk targets (HRTs), mission essential vulnerable areas (MEVAs) and ensure planning provides for focus on these areas. Facility managers whose facility has been identified as a HRT will be informed, and will ensure facility security plans are formulated on this basis.

(5) Plans will include procedures for an attack warning system using a set of recognizable alarms and reactions for potential emergencies, as determined by the terrorist threat, criticality, and vulnerability assessments. Commanders will exercise the attack warning system and ensure personnel are trained and proficient in recognition. In conjunction with the alarm warning system, commanders will conduct drills on emergency evacuations/ movements to safe havens/shelters-in-place.

(b) Take appropriate action to prevent loss of life and/or mitigate property damage before the FBI response force arrives. On-site elements or USACIDC elements will be utilized to safeguard evidence, witness testimony, and related aspects of the criminal investigation process pending arrival of the FBI response force. Command of U.S. Army elements will remain within military channels.

(c) If the FBI declines jurisdiction over a threat incident occurring in an area of exclusive or concurrent Federal jurisdiction, take appropriate action in conjunction with USACIDC elements to resolve the incident. In such cases, commanders will request advisory support from the local FBI office.

(d) If the FBI declines jurisdiction over a threat incident occurring in an area of concurrent or proprietary Federal jurisdiction, coordinate the military response with USACIDC elements, state and local law enforcement agencies, as appropriate. In such cases, commanders will request advisory support from the local FBI office.

(a) Where practicable, involve HN security and law enforcement agencies in AT reactive planning and request employment of HN police forces in response to terrorist attacks.

(b) Coordinate reactions to incidents of a political nature with the U.S. Embassy and the HN, subject to instructions issued by the combatant commander with geographical responsibility.

(8) USACIDC will investigate threat incidents in accordance with paragraph 2–20d.

(9) AT plans, orders, SOPs, terrorism threat, criticality, and vulnerability assessments, and coordination measures will consider the potential threat use of WMD. Commanders will assess the vulnerability of installations, facilities, and personnel within their AOR to potential threat of terrorist using WMD and CBRNE weapons to include TIH. Clear command, control, and communication lines will be established between local, state, Federal, and HN emergency assistance agencies to detail support relationships and responsibilities. Response to WMD use by terrorists will be synchronized with other crisis management plans that deal with large-scale incident response and consequence management. Separate plans devoted only to terrorist use of WMD need not be published if existing crisis management plans covering similar events (such as accidental chemical spills) are sufficiently comprehensive.