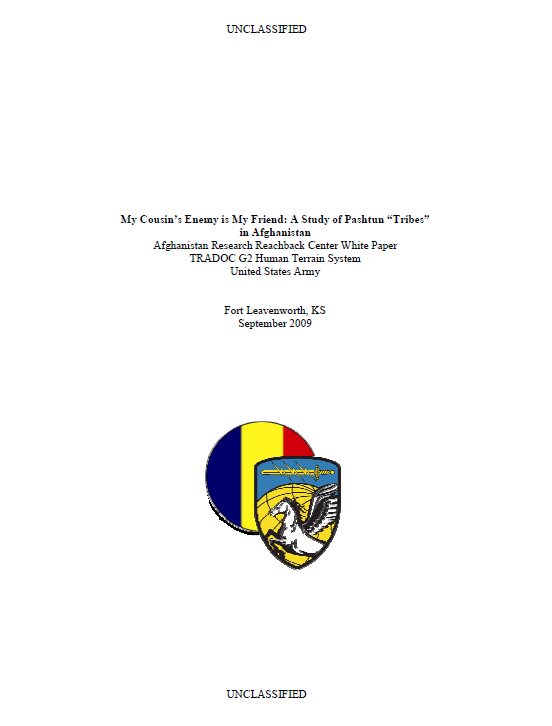 My Cousin’s Enemy is My Friend: A Study of Pashtun “Tribes” in Afghanistan

This report consists of two main parts: the first part is an overview of the existing historical and anthropological research on Pashtun “tribes” in Afghanistan, and the second part examines how “tribes” behave in Afghanistan. It is based mostly on academic sources, but it also includes unclassified government information and research performed by HTS Human Terrain Teams, which have been attached to U.S. Army brigades since 2007.

Military officers and policymakers, in their search for solutions to problems in Afghanistan, have considered empowering “the tribes” as one possible way to reduce rates of violence. In this report, the HTS Afghanistan RRC warns that the desire for “tribal engagement” in Afghanistan, executed along the lines of the recent “Surge” strategy in Iraq, is based on an erroneous understanding of the human terrain. In fact, the way people in rural Afghanistan organize themselves is so different from rural Iraqi culture that calling them both “tribes” is deceptive. “Tribes” in Afghanistan do not act as unified groups, as they have recently in Iraq. For the most part they are not hierarchical, meaning there is no “chief” with whom to negotiate (and from whom to expect results). They are notorious for changing the form of their social organization when they are pressured by internal dissension or external forces. Whereas in some other countries tribes are structured like trees, “tribes” in Afghanistan are like jellyfish.

Instead of “tribal engagement” in Afghanistan, the HTS Afghanistan RRC advocates for “local knowledge, cultural understanding, and local contacts,” in the words of David Kilcullen. There are no shortcuts. What this means in practical terms is a need to focus on ground truth, looking at local groups and their conflicts, rather than arriving with preconceived notions of how people should or might, given the proper incentives, organize themselves tribally. Most of Afghanistan has not been “tribal” in the last few centuries, and the areas that might have been (majority-Pashtun areas that make up parts of Regional Commands South and East) have changed drastically over the past 30 years. Pashtuns may choose to organize themselves along many different forms of identity, and may be conscious of belonging to more than one form of community simultaneously. Pashtuns’ motivations for choosing how to identify and organize politically— including whether or not to support the Afghan government or the insurgency—are flexible and pragmatic. “Tribe” is only one potential choice of identity among many, and not necessarily the one that guides people’s decision-making.

Local Conflicts: A Test of “Tribe”

Conflict is an important category of social interactions to examine for two reasons. First, because Afghan society is popularly described as “tribal” and communal disputes are often labeled “tribal conflicts,” it is worthwhile to examine the role that tribal identities and institutions actually play in conflicts between Afghans. Second, the existence and outcomes of conflicts have political and security implications. How the government does or does not deal with local conflicts shapes public perceptions about government effectiveness and insurgents exploit local conflicts to increase their area of influence. Examining Afghan conflict dynamics then helps answer whether or not tribe is an operationally useful concept and illustrates that understanding Afghan social dynamics is critical for defeating the insurgency and strengthening Afghanistan’s government.

Most Afghans are not invested and do not take part in the conflicts that are typically of greatest concern to Coalition Forces. National politics and the insurgency are issues about which Afghans may have opinions – quite strong ones, in fact – but they are not the conflicts that they experience on a daily basis. Particularly in the rural areas in which most Afghans reside, Afghans are heavily invested actors in local conflicts. Local conflicts in Afghanistan are pervasive, often long-lasting, and inextricably tied to Afghan livelihoods and social relations. Further, Taliban and other insurgents exploit and exacerbate local conflicts in order to expand their influence. Correctly understanding local conflict dynamics then is a critical first step to combating the insurgency in Afghanistan.

Tribal and ethnic identities offer convenient frameworks for both Afghans and external observers to describe local conflicts. In some cases, these narratives resonate, providing a reasonable and accepted explanation for the conflict, in turn mobilizing others of the same tribe or ethnic group to play a role in a conflict. Over time, related sub-conflicts that have spun off from the original conflict may lead to a situation in which two large groups, each sharing a tribal or ethnic identity, actively participate in conflict against one another. However, for reasons explored in greater detail below, tribal and ethnic narratives are inappropriate for describing the general causes and dynamics of local conflict in Afghanistan. A close examination of the human terrain and the features of conflicts in Afghanistan demonstrate that viewing conflicts through a tribal lens offers few unique or useful insights.