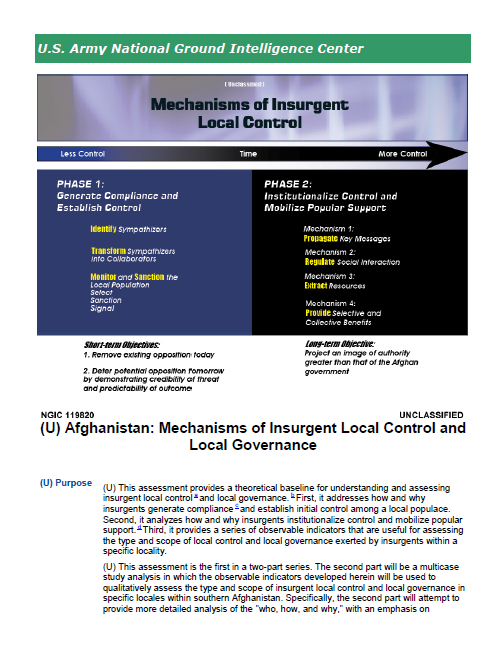 • (U) Many students of insurgency and counterinsurgency attest to the importance of popular support to each side’s quest to achieve its objectives. Key aspects of popular support, including type (passive or active) and scope (limited or significant), are inarguably important in analyzing an insurgency. However, focusing solely or immediately on these aspects risks glossing over insurgent efforts to set conditions necessary to mobilize such support in the first place. Most notably, these conditions include the generation of compliance and the establishment and institutionalization of control.

• (U) Insurgents seek to cultivate the ability to monitor and sanction elements of the population in order to generate compliance and establish control. In addition to sanctioning oppositional figures and activities, insurgents aim to shape future behavior by establishing approved and disapproved activities and the expected outcome associated with each. (High Confidence)

• (U) Upon generating compliance and establishing control, insurgents seek to institutionalize control (govern) and mobilize popular support to the extent necessary to achieve broader objectives. To do so, insurgents develop and strengthen mechanisms intended to propagate key messages, regulate social interaction, extract resources, and provide selective and collective benefits among a local population. (High Confidence)

• (U) One can identify certain observable indicators at various points within the processes of generating compliance, establishing and institutionalizing control, and mobilizing popular support. When analyzed collectively and systematically, these indicators provide a useful framework for assessing the type and scope of insurgent local control and local governance in locales within Afghanistan.

(U) Insurgents must first identify individuals within the local population who are likely to sympathize with the insurgents and/or their cause. During their initial efforts to penetrate an area, insurgents will frequently seek to leverage informal relationships that are based on familial (blood or marriage), geographical (neighbor), tribal, religious (village mullah), or other ideological ties that tend toward trust, familiarity, and solidarity of purpose.

(U) In many instances, particularly those in which an insurgency spreads beyond areas inhabited by its primary constituency, the types of relationships described above may not exist. In such cases, insurgents may attempt to identify fractures or competition between local groups in order to approach and co-opt elements within them, frequently those that are weaker or less influential.

While these groups may be less likely to sympathize with the insurgent cause, they may be willing to provide certain types of support (e.g., local information) in exchange for resources or future power-sharing agreements that would increase their chances of gaining a decisive advantage vis-à-vis more powerful competitors.

(U) Transform Sympathizers Into Collaborators

(U) One example involves framing the insurgent cause or certain objectives within the context of shared cultural,  religious, nationalistic, or other ideological beliefs that tend to resonate with broad elements of the local population. Another involves emphasizing the promise of future benefits, including power-sharing arrangements.