The following manual was originally posted to Scribd by Joseph Larsen. 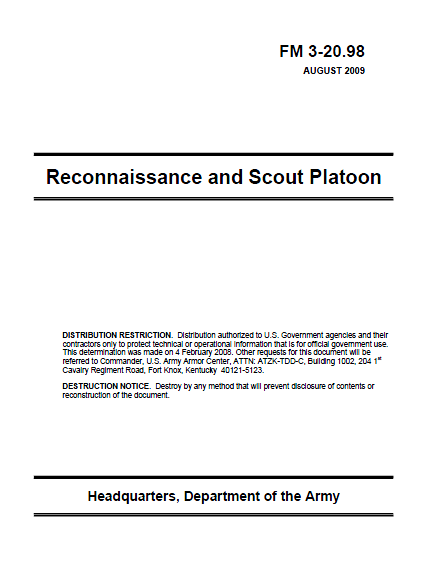 • Provides doctrinal guidance for commanders and leaders of the currently transitioning organizations who are responsible for planning, preparing, executing, and assessing operations in the reconnaissance and scout platoons.
• Serves as an authoritative reference for personnel developing doctrine (fundamental principles and TTP), materiel and force structure, institutional and unit training, and standing operating procedures (SOP) for reconnaissance and scout platoon operations. It does not, however, cover deployment; reception, staging, onward movement, and integration; or redeployment operations.
• Describes doctrine that is based on suggestions, insights, and observations from previously developed doctrine and from units and leaders taking part both in operational situations, such as Operation Iraqi Freedom (OIF) and Operation Enduring Freedom (OEF), and in training at the Army’s combat training centers. These doctrinal principles and procedures are intended to be used as a guide and are not to be considered inflexible. Each situation in combat must be resolved by an intelligent interpretation and application of the doctrine outlined in this manual.
• Is directed toward the reconnaissance and scout platoon leader and platoon sergeant (PSG). The manual reflects and supports Army operations doctrine as covered in FM 3-0, Operations; FM 3-90, Tactics; FM 3-90.6, The Brigade Combat Team; and FM 3-20.96, Reconnaissance Squadron. It is not a stand-alone reference for reconnaissance and scout platoon operations; rather, it is intended to be used in conjunction with those and other existing doctrinal resources.
• Outlines the framework in which the five types of reconnaissance and scout platoons (HBCT, IBCT, SBCT, BFSB, and ACR) will operate, either by themselves or together as part of the troop or larger organization. The manual also includes discussions of doctrine that is applicable to each specific type of platoon.

THE OE IN RECONNAISSANCE OPERATIONS

3-33. Reconnaissance and scout platoons must be prepared to operate beyond the traditional roles of reconnaissance, surveillance, and target acquisition of enemy forces. Today, scouts must adjust their traditional roles to fulfill the broader mission of providing SU in its fullest sense. This involves an understanding of the OE in all its aspects, covering political, economic, social, information, infrastructure, physical environment, and time variables in addition to the military aspects of the OE. This multidimensional requirement means that the platoon must develop an understanding of what is happening and why. In the asymmetric environment, identifying enemy centers of gravity, decisive points, and the means to influence the enemy’s will and behavior—while observing proper ROE—is one of the most important contributions that the platoon can make to ensure successful mission accomplishment. For more information on the OE, refer to FM 3-0.

NONTRADITIONAL ASPECTS OF THE OE

3-34. The Army has traditionally focused its efforts on traditional combat operations, based on open terrain, force-on-force battles, and symmetrical enemy formations, focusing on gaining information on the enemy and terrain. Platoon planning, however, must expand to include nontraditional aspects of OE variables that could influence its operations.

3-35. Conditions in the new millennium, coupled with the technological developments of the information age, raise the specter of asymmetric warfare, a concept in which a weak opponent successfully engages a stronger opponent using a variety of non-conventional TTPs. The goal is to gain an advantage in hopes of achieving the weaker force’s objectives and goals. Asymmetric threats include—

3-36. Threat elements will use a number of nontraditional approaches in conducting asymmetric warfare, including the following:

3-37. The urban environment confronts commanders with a combination of difficulties rarely found in other settings in which the Army conducts operations. The distinct characteristics of the urban environment are primarily a function of the following factors:

3-38. The human dimension represents potentially the most important and the most perplexing factor for commanders to understand and evaluate. Although urban terrain is complex, understanding it is a relatively straightforward process in comparison to comprehending the multifaceted nature of urban society. The urban environment is, first, a human environment. That makes it different from all other types. An urban environment is not solely defined by its structures or systems but by the people who compose it. It reacts and interacts with an army in ways that no natural environment can.

3-39. Military operations often require Army forces to operate in close proximity to a high density of civilians, whose presence, attitudes, actions, and needs in turn affect the conduct of operations. Civilian populations continually influence, to varying degrees, military operations within an AO. As urban areas increase in size, they become less and less homogenous; therefore, commanders must understand and account for the characteristics of a diverse population whose beliefs and actions may vary based on many factors. Improving communications with the local population (especially using interpreters) can improve intelligence gathering and win acceptance of the platoon within that AO. Security requirements might change when these personnel are on vehicles and around digital communication systems.

3-40. The decisive terrain during a military operation, particularly in stability operations, may be the civilian inhabitants themselves. To gain and/or retain the support of the civilian population, commanders must first understand (through reconnaissance) the complex nature and character of the urban society and its infrastructure. Scouts must then understand and accept that every military action (or inaction) may influence, positively or negatively, the relationship between the urban population and Army forces and, by extension, have a significant impact on mission success. With this awareness, commanders visualize decisions they must make, plan operations, and implement programs. They can take immediate action to maintain support of a friendly populace, gain the support of neutral factions, or neutralize hostile elements. Unit continuity books maintaining feedback on past operations within the area will provide insight on past successful and unsuccessful missions and their results.

3-152. HUMINT is a category of intelligence derived from information collected and provided by human sources. It uses human sources as a tool and a variety of collection methods, both passive and active, to gather information to satisfy the commander’s intelligence requirements and cue other intelligence disciplines. HUMINT tasks include, but are not limited to, the following:

3-153. All reconnaissance and scout platoon leaders can expect to conduct some form of HCT collection activities to gather the information needed to make decisions in support of the overall mission. HUMINT activities help the platoon leader shape the AO by providing information that enables him to respond to previously unforeseen threats. He focuses the HUMINT effort by carefully assigning missions and clearly defining the desired results. In orienting the unit’s HUMINT efforts and capabilities, the platoon leader must decide who or what will be advantageous targets for collection activities. As noted, only the SBCT reconnaissance platoon has organic HUMINT personnel.

3-154. The SBCT platoon’s HUMINT Soldiers, who can be augmented by interrogators (from the MICO) when available, conduct collection operations in support of the overall mission. These operations rely on the use of both casual and recruited sources of information. The collection effort includes liaison activities; the debriefing of refugees, detainees, and EPWs; review of open source literature; and DOMEX. HUMINT collectors directly support SE and subsequent intelligence gathering operations against the enemy. These operations use the techniques identified in FM 34-5 and FM 2-22.3. Other resources include AR 381-172, which covers policy concerning counterintelligence force protection source operations (CFSO), and AR 381-10, which outlines policies and procedures governing the conduct of intelligence activities by the Army.

3-156. Platoon leaders should be familiar with the types of sources HUMINT personnel will use to satisfy command PIR:

3-157. In military urban operations, people (EPWs and civilians) are the preeminent source of information. HUMINT collection provides information otherwise not available through SIGINT and image intelligence (IMINT). As an example, when a lodgment is made in a building, the HUMINT collectors: