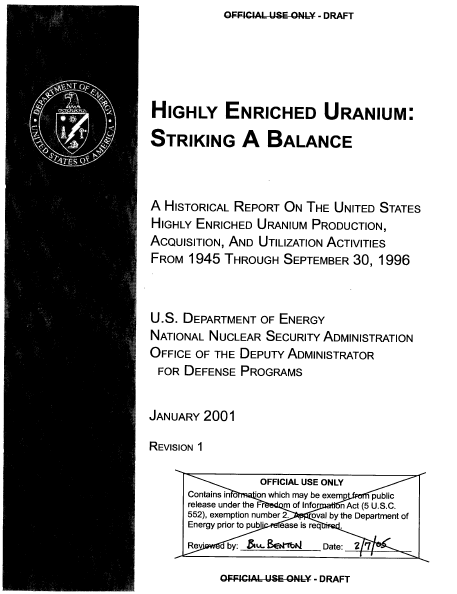 A HISTORICAL REPORT ON THE UNITED STATES HIGHLY ENRICHED URANIUM PRODUCTION, ACQUISITION, AND UTILIZATION ACTIVITIES FROM 1945 THROUGH SEPTEMBER 30, 1996

In February 1996, the Department of Energy (DOE) commissioned a comprehensive effort to document and declassify the United States inventory and other information needed to present a complete picture of the production, acquisition, and utilization of highly enriched uranium (HEU). Highly Enriched Uranium: Striking A Balance presents the results of that study. The effort was commissioned to facilitate discussions of HEU storage, safety, and security with stakeholders, to encourage other nations to declassify and release similar data, and to support the national policy on transparency of nuclear materials. This information will also be available for formulating policies involving the identification and disposition of surplus nuclear materials.

Highly Enriched Uranium: Striking A Balance contains details of the U.S. HEU inventory as of September 30,1996, and provides a historical material balance that summarizes over 50 years of U.S. activities that produced, acquired, and utilized HEU. ,This report focuses on the facilities and activities that have produced and used HEU during the 50-year history of the nuclear weapons complex. The report contains important newly declassified HEU information regarding the total U.S. inventory, including the quantities required to support ongoing Departmental programs. Other newly declassified information includes details about the HEU produced in the U.S. uranium enrichment facilities and the total quantity of HEU transferred to the United Kingdom under a Mutual Defense Agreement.

Recognizing that openness is essential to public accountability and trust, the DOE is continuing to take aggressive steps to declassify and inform the public about the Department’s past and present activities where it does not jeopardize U.S. national security or aid worldwide nuclear proliferation. In this way, this report “strikes a balance” between openness and the necessity to protect information that needs to remain classified for nonproliferation and national security reasons. 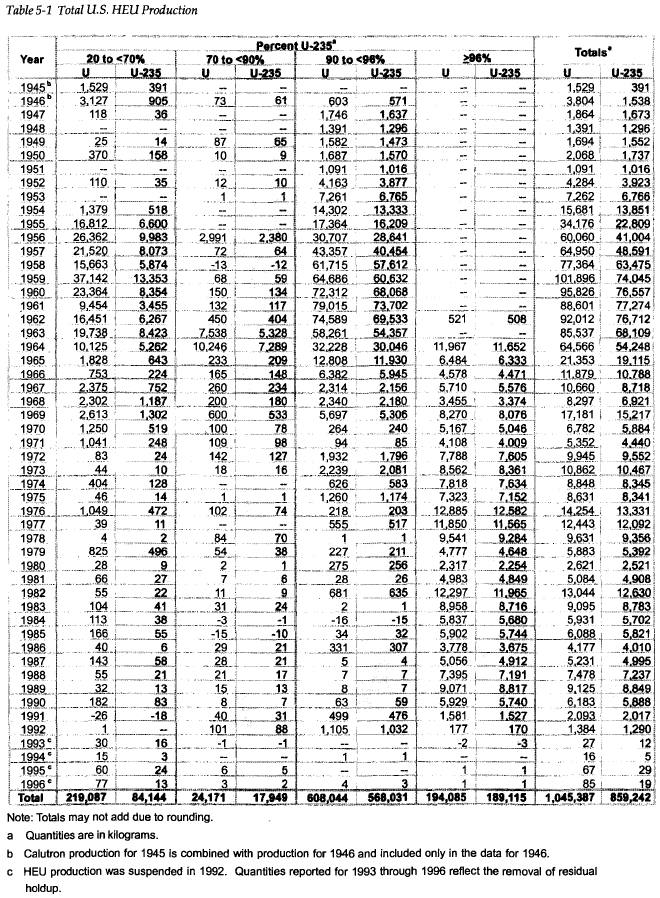