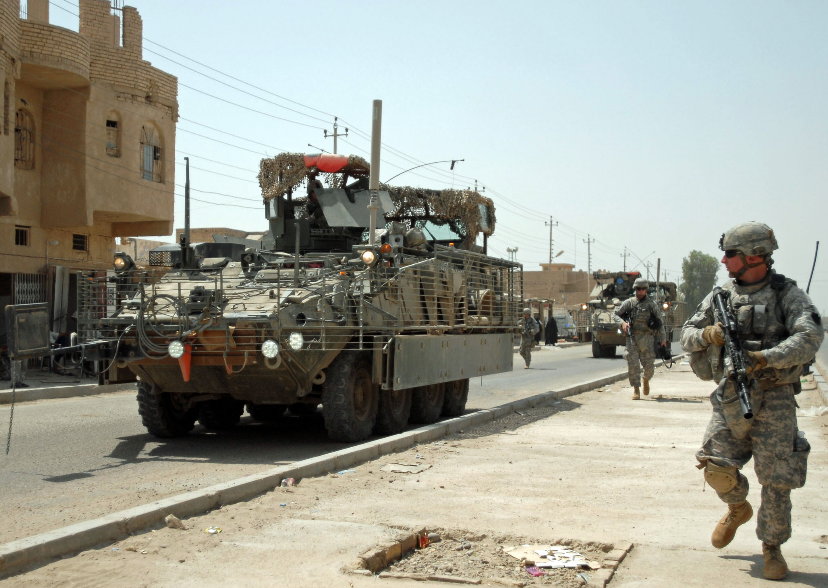 An example of a Stryker Infantry Carrier Vehicle operating in Iraq in July 2009. A number of Strykers and other combat vehicles are being purchased by the Department of Defense under an obscure section of the FY2008 National Defense Authorization Act for "homeland defense missions, domestic emergency responses, and providing military support to civil authorities." Photo via Pennsylvania National Guard.

Subsection (e) of section 1815 of the FY2008 NDAA also modifies the official roles and responsibilities of the Secretary of Defense stated in 10 USC § 113 to indicate that “with the approval of the President and after consultation with the Chairman of the Joint Chiefs of Staff” the Secretary is responsible for providing “written policy guidance for the preparation and review of contingency plans, including plans for providing support to civil authorities in an incident of national significance or a catastrophic incident, for homeland defense, and for military support to civil authorities.” This guidance will be provided “every two years or more frequently as needed and shall include guidance on the specific force levels and specific supporting resource levels projected to be available for the period of time for which such plans are to be effective.”

Section 1815 of the FY2008 NDAA is the result of recommendations made by the Commission on the National Guard and Reserves (CNGR), a 13-member independent commission created by Congress in 2004. In their final report published in 2008, the CNGR describes section 1815 as a way of prioritizing domestic support missions within the military, allowing DoD to explicitly budget for resources needed in providing military support to civil authorities.  The final report of the CNGR describes the Department of Homeland Security as “the federal agency with the most comprehensive national perspective on the response capabilities present in federal, state, and local government” placing it in the “best position to generate civil support requirements.”  The CNGR report also recommends that DoD, the National Guard and DHS work to “exchange representatives” and personnel in advisory positions to increase common knowledge and training related to civil support missions.

A Congressional Research Service report on the domestic support roles of U.S. Northern Command describes section 1815 of the FY2008 NDAA as a strengthening of the relationship between the Department of Defense and the Department of Homeland Security:

In November 2008, Secretary of Defense Robert Gates issued a memorandum on paths to implementing the CNGR’s suggestions. The memorandum orders the Secretaries of the military departments and the Commander of U.S. Special Operations Command, in coordination with the Commanders of U.S. Northern Command, U.S. Pacific Command and the Chief of the National Guard Bureau to identify critical dual-use (CDU) equipment as part of the military’s overall efforts to comply with section 1815 of the FY2008 NDAA. CDU is equipment that can be employed by National Guard and other military forces in both their federal and state missions allowing “personnel to assist civil authorities in responses to natural disasters, acts of terrorism, and other man-made disasters as identified in the national planning scenarios.”

The Government Accountability Office released a report in 2010 on the DoD’s efforts to identify capabilities for supporting civil authorities during disasters and other emergencies.

Nearly a year after it was passed, the House Armed Services Committee reiterated its “strong support” for section 1815 of the 2008 NDAA and “urged” the DoD to comply with its planning requirements.  The committee also encouraged DoD to incorporate “non-lethal capabilities” in its civil support planning:

Army Chief of Staff Ray Odierno wrote in a recent article in Foreign Affairs that the increasing use of the military in domestic situations will be part of a necessary evolution as it transitions to “responding in force to a range of complex contingencies” both inside the U.S. and abroad. Odierno states that the “need for U.S. armed forces, and the army in particular, to provide planning, logistical, command-and-control, and equipment support to civil authorities in the event of natural disasters continues to be demonstrated regularly and is unlikely to diminish.” The Army will “contribute to broader national efforts to counter those challenges at home, if needed” including using “active-duty forces, especially those with niche skills and equipment, to provide civilian officials with a robust set of reliable and rapid response options.”