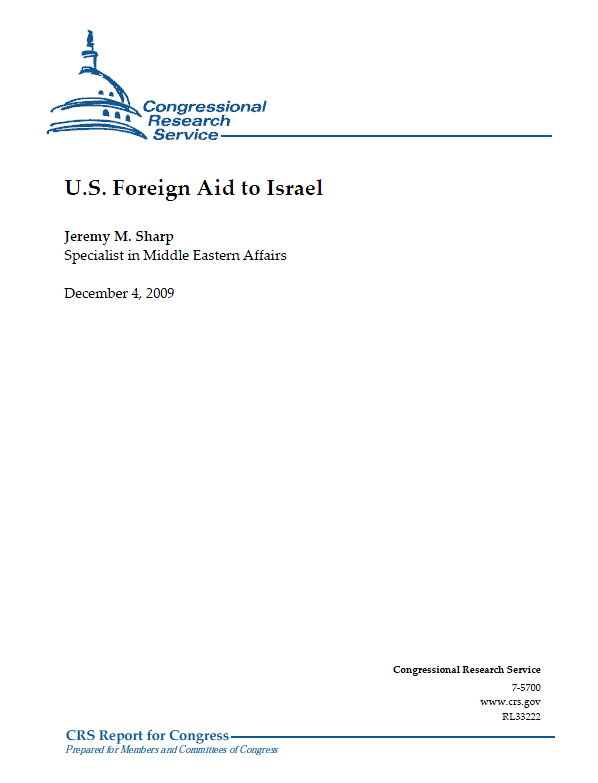 This report provides an overview of U.S. foreign assistance to Israel. It includes a review of past aid programs, data on annual assistance, and an analysis of current issues. The report will be updated annually to reflect developments over the previous year. For general information on Israel, see CRS Report RL33476, Israel: Background and Relations with the United States, by Carol Migdalovitz. For information on overall U.S. assistance to the Middle East, see CRS Report RL32260, U.S. Foreign Assistance to the Middle East: Historical Background, Recent Trends, and the FY2010 Request, by Jeremy M. Sharp.

Almost all U.S. bilateral aid to Israel is in the form of military assistance. In the past, Israel also
had received significant economic assistance. Strong congressional support for Israel has resulted
in Israel’s receiving benefits not available to other countries. For example, Israel can use some
U.S. military assistance both for research and development in the United States and for military
purchases from Israeli manufacturers. In addition, all U.S. foreign assistance earmarked for Israel
is delivered in the first 30 days of the fiscal year. Most other recipients normally receive aid in
installments. Congress also appropriates funds for joint U.S.-Israeli missile defense programs.
In August 2007, the Bush Administration announced that it would increase U.S. military
assistance to Israel by $6 billion over the next decade. The agreement calls for incremental annual
increases in Foreign Military Financing (FMF) to Israel, reaching $3 billion a year by FY2012.
For FY2010, the Obama Administration requested $2.775 billion in FMF to Israel. Congress
provided $555 million of Israel’s total FY2010 FMF appropriation in P.L. 111-32, the FY2009
Supplemental Appropriations Act. The remaining funds are contained in H.R. 3081 and S. 1434,
the House and Senate’s FY2010 Foreign Operations Appropriations bills respectively, which
await further action in both chambers.

On July 9, 2009, Congressman Christopher Smith introduced H.R. 3160, the Israel Foreign
Assistance Appropriations Act, 2010. Among other items, the bill would require “that none of the
funds made available under this paragraph, except those specified in the fourth proviso under this
heading, shall be available to finance the procurement of defense articles, defense services, or
design and construction services that are not sold by the United States Government under the
Arms Export Control Act unless Israel has first signed an agreement with the United States
Government specifying the conditions under which such procurements may be financed with such
funds.” The bill has been referred to the House Committee on Appropriations and awaits further
action. 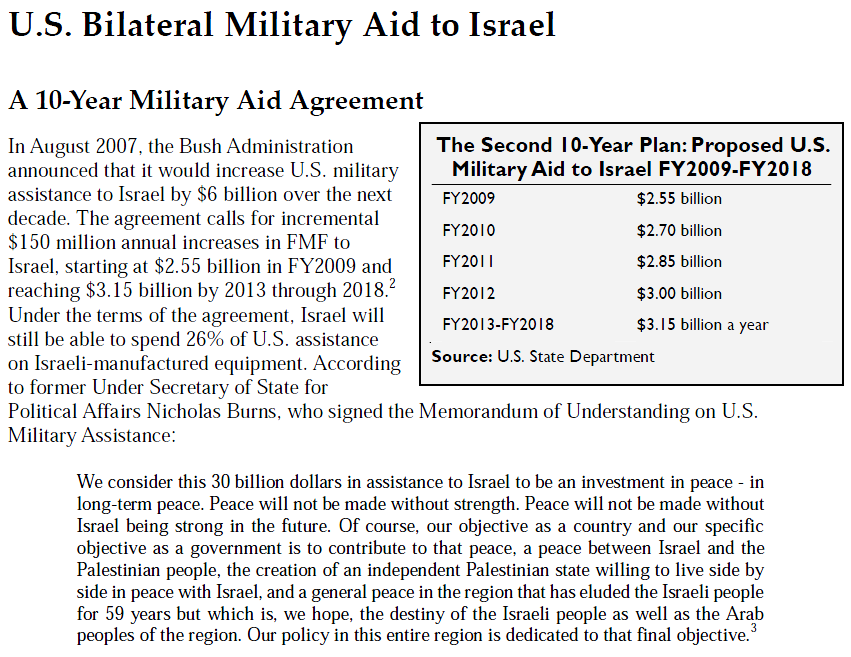 Israel uses almost 75% of its FMF funds to purchase U.S. defense equipment. By law, Congress
must be notified of most new purchase agreements. The Department of Defense’s Defense
Security Cooperation Agency (DSCA) is charged with managing U.S. arms sales to Israel. Recent
notifications include the following:

• On September 29, 2008, DSCA notified Congress of a possible Foreign Military
Sale to Israel of the F-35 Joint Strike Fighter aircraft along with associated
equipment and training. The total value of this deal could be as high as $15.2 billion. Lockheed Martin, Pratt & Whitney Military Engines, and General
Electric are the prime contractors.

• On July 30, 2008, DSCA notified Congress of a possible Foreign Military Sale to
Israel of 9 C-130 J-30 aircraft as well as associated equipment and services. The
total value, if all options are exercised, could be as high as $1.9 billion. Lockheed
Martin is the prime contractor.

In April 1998, the United States designated Israel as a “major non-NATO ally,” which qualifies
Israel to receive Excess Defense Articles (EDA) under Section 516 of the Foreign Assistance Act
and Section 23(a) of the Arms Export Control Act. DSCA manages the EDA program, which
enables the U.S. to reduce its inventory of outdated equipment by providing friendly countries
with necessary supplies at either reduced rates or at no charge.