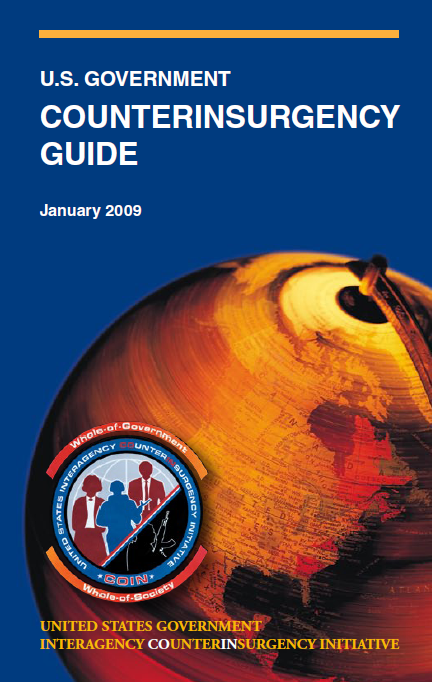 Insurgency is the organized use of subversion and violence to seize, nullify or challenge
political control of a region. As such, it is primarily a political struggle, in
which both sides use armed force to create space for their political, economic and
influence activities to be effective. Insurgency is not always conducted by a single
group with a centralized, military-style command structure, but may involve a
complex matrix of different actors with various aims, loosely connected in dynamic
and non-hierarchical networks. To be successful, insurgencies require charismatic
leadership, supporters, recruits, supplies, safe havens and funding (often from illicit
activities). They only need the active support of a few enabling individuals, but the
passive acquiescence of a large proportion of the contested population will give
a higher probability of success. This is best achieved when the political cause of
the insurgency has strong appeal, manipulating religious, tribal or local identity
to exploit common societal grievances or needs. Insurgents seek to gain control of
populations through a combination of persuasion, subversion and coercion while
using guerrilla tactics to offset the strengths of government security forces. Their
intent is usually to protract the struggle, exhaust the government and win sufficient
popular support to force capitulation or political accommodation. Consequently,
insurgencies evolve through a series of stages, though the progression and outcome
will be different in almost every case.

Counterinsurgency (COIN) is the blend of comprehensive civilian and military
efforts designed to simultaneously contain insurgency and address its root causes.
Unlike conventional warfare, non-military means are often the most effective
elements, with military forces playing an enabling role. COIN is an extremely
complex undertaking, which demands of policy makers a detailed understanding of
their own specialist field, but also a broad knowledge of a wide variety of related
disciplines. COIN approaches must be adaptable and agile. Strategies will usually be
focused primarily on the population rather than the enemy and will seek to reinforce
the legitimacy of the affected government while reducing insurgent influence. This
can often only be achieved in concert with political reform to improve the quality
of governance and address underlying grievances, many of which may be legitimate.
Since U.S. COIN campaigns will normally involve engagement in support
of a foreign government (either independently or as part of a coalition), success
will often depend on the willingness of that government to undertake the necessary
political changes. However great its know-how and enthusiasm, an outside
actor can never fully compensate for lack of will, incapacity or counter-productive
behavior on the part of the supported government.

This guide employs a COIN model that comprises five main functional components:
The political function is the key function, providing a framework of political
reconciliation, and reform of governance around which all other COIN activities
are organized. In general, a COIN strategy is only as good as the political
plan at its heart.

The economic function seeks to provide essential services and stimulate long
term economic growth, thereby generating confidence in the government while
at the same time reducing the pool of frustrated, unemployed young men and
women from which insurgents can readily recruit.

The security function is an enabler for the other functions and involves development
not just of the affected nation’s military force, but its whole security
sector, including the related legal framework, civilian oversight mechanisms
and judicial system. Establishing security is not a precursor to economic and
governance activity: rather security, economic and governance activity must be
developed in parallel.

These four functions contribute to the overall objective of enabling the affected
government to establish control, consolidating and then transitioning it from intervening
forces to national forces and from military to civil institutions.

The imperative to achieve synergy among political, security, economic and information
activities demands unity of effort between all participants (the affected government,
USG agencies and coalition partners). This is best achieved through an integrated
approach to assessment and planning. A common interagency assessment of
the insurgency establishes a deep and shared understanding of the cultural, ideological,
religious, demographic and geographical factors that affect the insurgency. Such
understanding provides the foundation for policy formulation when the risks and
costs of intervention are weighed against U.S. interests in determining whether to
become involved and what form that involvement should take. This decision should
not be taken lightly; historically COIN campaigns have almost always been more
costly, more protracted and more difficult than first anticipated. Much will hinge on
the degree to which policy makers consider the affected government to be receptive
to assistance, advice and reform; it is folly to intervene unless there is a reasonable
likelihood of cooperation. If the USG does decide to become involved, then policy
makers should seek a careful balance which employs the most appropriate, most
indirect and least intrusive form of intervention yet still gives a high probability of
achieving the necessary effect. The sovereignty of the affected government must
be maintained and too high a U.S. profile may be counter-productive (historically,
some of the most successful U.S. engagements have been indirect and low key).
Once U.S. assistance is committed, a COIN strategy must be devised, ideally in
collaboration with the affected government and other coalition partners, since their
early inclusion can help mitigate the effects of operational level differences in goals,
capabilities and culture. Detailed, integrated planning then follows and a process
of continuous monitoring, evaluation and assessment is used to measure progress
and identify where changes in approach are necessary to achieve success.
Success in COIN can be difficult to define, but improved governance will usually
bring about marginalization of the insurgents to the point at which they are destroyed,
co-opted or reduced to irrelevance in numbers and capability. U.S. intervention may
cease when success is assured but before it is actually achieved. Ultimately, the
desired end state is a government that is seen as legitimate, controlling social, political,
economic and security institutions that meet the population’s needs, including
adequate mechanisms to address the grievances that may have fueled support of the
insurgency. 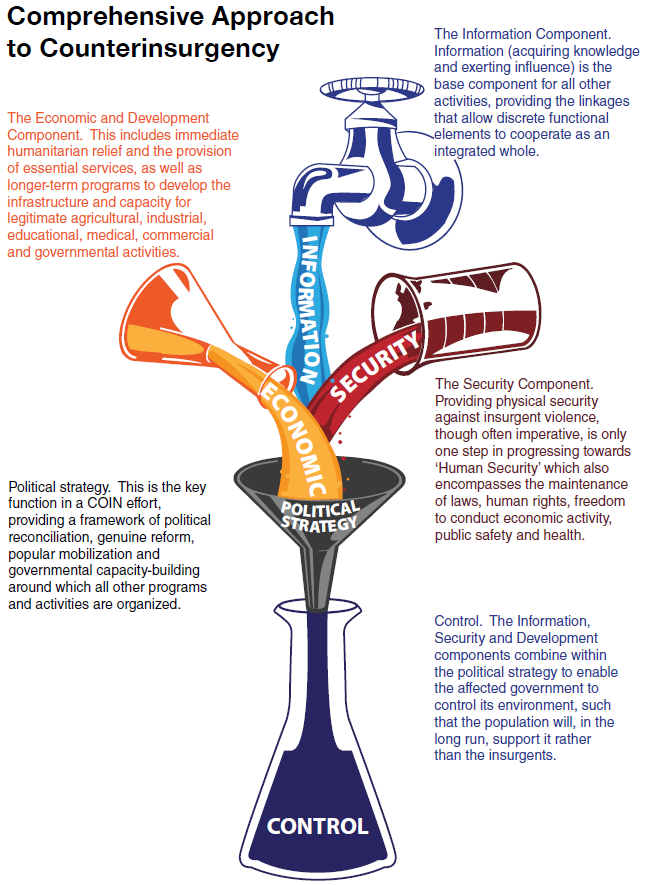 Insurgency is the organized use of subversion and violence to seize, nullify or challenge
political control of a region. As such, it is primarily a political struggle, in
which both sides use armed force to create space for their political, economic and
influence activities to be effective. Insurgency is not always conducted by a single
group with a centralized, military-style command structure, but may involve a
complex matrix of different actors with various aims, loosely connected in dynamic
and non-hierarchical networks. To be successful, insurgencies require charismatic
leadership, supporters, recruits, supplies, safe havens and funding (often from illicit
activities).