The U.S. Government’s Guide to the Syrian People 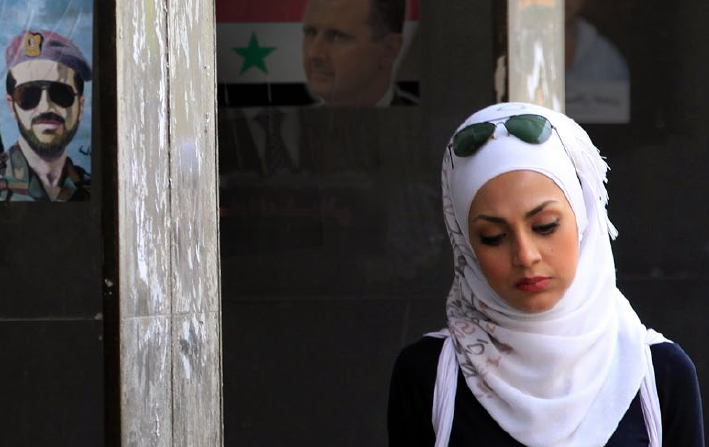 A photo from the cover of the Open Source Center Master Narratives Country Report on Syria shows a woman walking beneath paintings of Syrian president Bashar al-Assad.

The Director of National Intelligence’s Open Source Center produced a report in June 2012 to help representatives of the U.S. government communicate with the Syrian people more effectively and better analyze their motivations.  The report, part of the Master Narratives series produced in conjunction with a private consulting firm called Monitor 360 and other “partners across the U.S. government”, is focused on “surfacing and articulating master narratives across a range of important geographies. These insights can be used to better understand critical audience segments and key influencers, build analytic capabilities, and develop actionable messaging and counter-messaging strategies.”

Master narratives are “historically grounded stories that reflect a community’s identity and experiences, or explain its hopes, aspirations, and concerns.”  By providing a standardized analysis of dominant narratives operating in a country, the Master Narratives reports are designed to help U.S. analysts and communicators perform their tasks more effectively.  Understanding these narratives can help U.S. representatives “move audiences in a preferred direction” by employing narratives that are invoked by “influencers” within the country.  In the case of Syria, the report warns that “Syrian influencers rely on their native familiarity with these master narratives to use them effectively. This task is considerably more challenging for US communicators and analysts because they must place themselves in the mindset of foreign audiences who believe stories that — from an American vantage point — may appear surprising, conspiratorial, or even outlandish.”

The theme of conspiracy is common throughout the Syrian Master Narratives report, which describes several narratives that are considered to be particularly widespread among the Syrian population. Two of these narratives involve threats from outside forces conspiring to destabilize or otherwise manipulate the Syrian government and its people.  The first narrative (“Conspiracies All Around”) embraces the idea that Syria has long been a victim of foreign manipulation from Western countries as well as other Arab interests.  The narrative describes how “Syria has withered under conspiracies that multiply like germs, with secretive cabals inside the country, scheming Westerners, and envious Arab neighbors all plotting to keep Syrians downtrodden and impoverished.”

The second narrative (“The Zionist Scourge” ) similarly embraces the idea of widespread conspiracy, yet sees this as the product of a Zionist plot.  The report describes the narrative in detail:

Anti-Israel sentiment is described as “commonplace in Syria” due to a number of factors, including Israel’s continued occupation of the Golan Heights.  The report states that “prior to the 2011–2012 Syrian uprising, anti-Israeli graffiti was common in areas neighboring the Golan.”

Due to widespread fear of foreign conspiracy, the Master Narratives report emphasizes that Syrians are likely to “construe US messaging as a political maneuver designed to unseat the regime and increase US influence in the Middle East.”  These fears can hinder U.S. and international efforts because members of the regime that embrace these views “closely scrutinize interactions between everyday Syrians and international actors — such as NGOs, aid organizations, or local operators — that are not intermediated through the Al-Asad regime.”  The report also notes that these conspiratorial narratives align with the master narratives of Iran, helping U.S. analysts to “better foresee which countries Syrian authorities will identify as natural partners.”