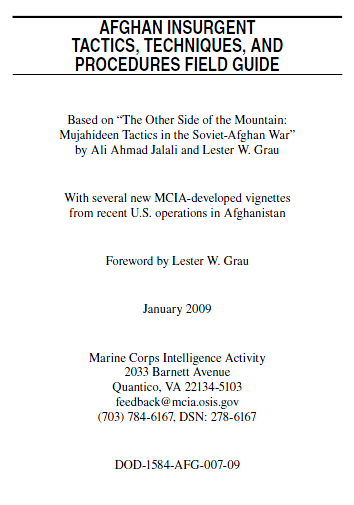 Studying past combat helps gain insight into how insurgents may operate in the future. This guide uses short, simple vignettes to highlight common Afghan insurgent tactics. Each vignette focuses on a particular mission profile, such as raids, ambushes, and defending against a cordon and search.

While tactics are continually evolving, the Afghans have a well documented history of using similar techniques against foreign militaries. Most of the vignettes in this guide are from the 1980s when Afghan insurgents fought the Soviet Union. Despite being more than 20 years old, many of the tactics remain in use today. For a more complete description of Afghan insurgent tactics against the Soviets, MCIA strongly recommends reading The Other Side of the Mountain by Ali Jalali and Les Grau, which this guide is based on. The final three vignettes in this guide are from recent operations in Afghanistan and demonstrate the evolution of tactics, techniques, and procedures (TTPs) by Afghan insurgents.

A Soviet column, returning to its base after a 4-day operation against the Mujahideen, was ambushed as it crossed a bridge going south on the main highway to Bagram.

The insurgents had observed the column headed north on the highway. They believed that the convoy would return the same way since the bridge was the only one in the region over the Panjsher River. The location was chosen because it would allow the Mujahideen to hit the convoy when it was most vulnerable: when half the column had crossed the bridge, and the force was divided by the river. They would ambush the column on its return trip when the troops were tired.

The Mujahideen secretly deployed on the day of the ambush. One group of 150 men was positioned in the orchards and hills south of the river (Map Point 1); a second group of 200 men was positioned to the north (Map Point 2). In both areas, rocket-propelled grenade launchers in covered positions were placed close to the road, with heavy machine guns on the more dominant terrain. Recoilless rifles and 82 mm mortars were placed for support. The Soviet column returned in the afternoon, and by 1600 it was split in two as it crossed the river (Map Point 3).

At a commander’s signal, the Mujahideen opened fire on the tanks, armored personnel carriers, and trucks along the entire length of the convoy. The Soviets drove off the road trying to escape. Those near the orchards had little room to maneuver. Twenty to 30 vehicles were burning. Soldiers dismounting from the armored personnel carriers came under heavy machine gun fire (Map Point 2). While some of the Soviets set up perimeter defenses to hold until help came, many abandoned their vehicles and tried to ford the river. Some were washed away while others headed for Bagram across the open plain.

As night fell, Soviet artillery ineffectively pounded Mujahideen positions. The insurgents moved through the abandoned vehicles, taking supplies and weapons. In the morning, the Soviets sent a relief column from Bagram to free the trapped convoy. The insurgents withdrew. The Mujahideen had two killed and seven wounded, with Soviet casualties unknown. 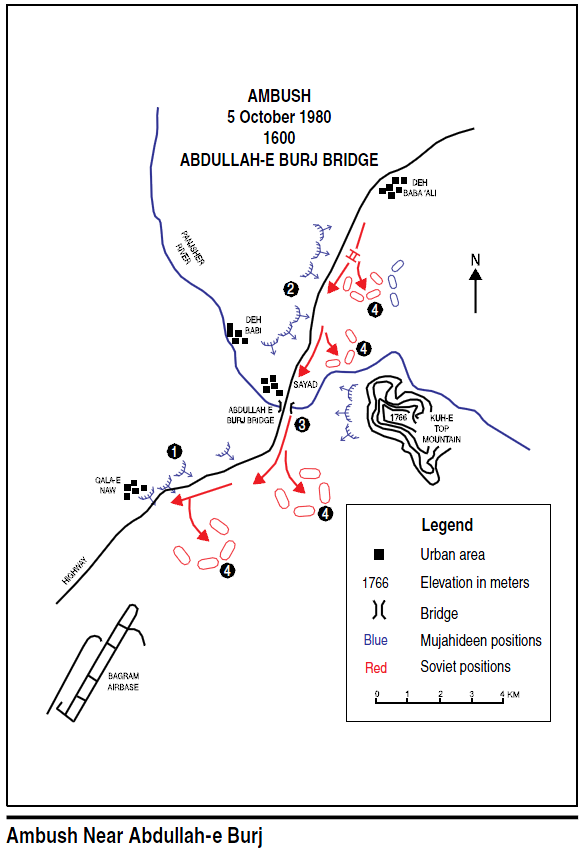