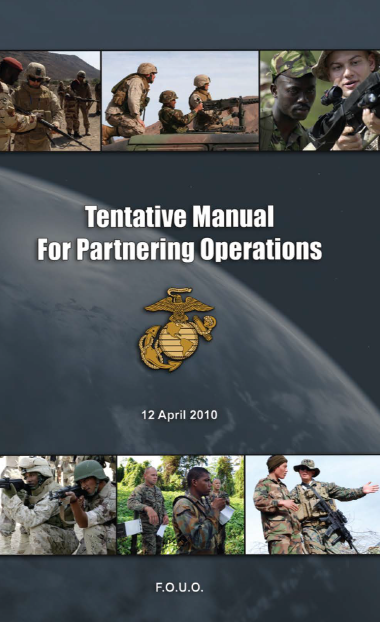 In warfighting and counterinsurgency operations, partnering is a command arrangement between a US security force and a host nation (HN) security force in which both forces operate together to achieve mission success and to build the capacity and capability of the HN force. Partnering is not an end, but a deliberate process, a means to an end. A near-term goal might be the standup and development of a HN force increasingly capable of independent operations and decreasingly dependent upon US partnered support. An intermediate objective might be the transition of lead security responsibility from US to HN force. But the ultimate goal is to become “un”-partnered, to enable the HN force to assume full responsibility for security and stability. In warfighting and counterinsurgency partnering, divorce is not a bad ending, it is the desired outcome.

Partnering should be a real union between the two partnered organizations, with a common purpose, in which the whole of the partnership becomes greater than the sum of its parts. Real partnering is total immersion. It cannot be done on occasion, when convenient, or as time permits. Nor should it be limited to periodic or occasional combined combat operations. Real partnering is instead a continuous, collective, and collaborative effort on tasks both large and small toward the common goal. It is full throttle engagement, warts and all.

Be culturally aware but not overly-sensitive.

a. Help the HN understand our perspective, our culture, and our values. Our values will most likely not be theirs so do not impose your values upon their culture; however, do not jeopardize your own morals and beliefs by being overly sensitive to theirs. The key is to ensure that the HN has a basic understanding of our values, especially the delicate balance of honesty vs. saving face.

b. HN forces understand that there may be times when the cultural strain is too great to overcome “living amongst” their personnel, but we must promote the sharing of common areas (dining area, COCs (within classification parameters), etc.) and activities (meals, PT, weapons/vehicle maintenance) which will ultimately help bridge cultural differences without encroaching on each other.

Encourage HN forces to build relationships with the local leaders

a. Positive interaction with the people builds trust – build this trust above all else!

b. Encourage local recruiting for security forces, especially police. In the United States, local police have to live in the communities that they work in; yet, in many places, national police are moved throughout the country where they have no ties to the community and are often viewed as outsiders. This may be an expedient method to restore law and order, but it should only be used in the most extreme circumstances. Locally recruited forces will have the backing of that community – “their community” – and their training by Marines and HN military units serves to reinforce the ties among Marines, the HN forces, and the communities that they operate in. Until the police force is made up of ‘local sons’ there will be no real security or trust in an area.

Embrace the chaos of the environment

a. Do not allow frustration with the HN to show – do it in private away from the partnering force members – never display direct frustration in front of your partnered force.

Do not hesitate to deviate from doctrine when needed.

a. The intent here is to “be doctrinally sound, not doctrinally bound”. “A force engaged in small wars operations, irrespective of its size, is usually independent or semi-independent and, in such a campaign, assumes strategically, tactical, and territorial functions” (SWM 2-10, pg 11). “In short, the force must be prepared to exercise those functions of command, supply, and territorial control which are required of the supreme command or its major subdivisions in regular warfare…For these reason, it is obvious that a force undertaking a small wars campaign must be adequately staffed for independent operations even if the tables of organization do not specify a full staff complement” (SWM 2-11, pg 12).