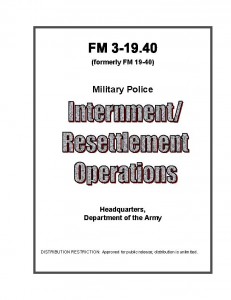 Field Manual (FM) 3-19.40 depicts the doctrinal foundation, principles, and processes that MP will employ when dealing with enemy prisoners of war (EPWs), civilian internees (CIs), US military prisoner operations, and MP support to civil-military operations (populace and resource control [PRC], humanitarian assistance [HA], and emergency services [ES]). FM 3-19.40 is not a standalone manual, and it must be used in combination with other publications. These publications are pointed out throughout the manual, and a consolidated list is provided in the bibliography.

This manual provides guidance that can be used by US Army service schools, students, sister services, and federal agencies. It is fully compatible with current joint, multinational, and interagency doctrine.

1-7. A CI is a person who is interned during armed conflict or occupation if he is considered a security risk or if he needs protection because he committed an offense (insurgent, criminal) against the detaining power. A CI is protected according to the Geneva Convention Relative to the Protection of Civilian Persons in Time of War (GC), 12 August 1949.

1-10. A person in the custody of US armed forces who has not been classified as an EPW (Article 4, GPW), an RP (Article 33, GPW), or a CI (Article 78, GC) is treated as an EPW until a legal status is ascertained by competent authority.

1-11. A DC is a civilian who left his home for various reasons. His movement and physical presence can hinder military operations. He most likely requires some degree of aid (medicine, food, shelter, or clothing). A DC may not be native to the area (local populace) or to the country where he resides. A DC is a generic term that is further subdivided into the following categories:

A civilian whose status cannot be determined is treated as an OD. All rules, regulations, and privileges applicable to an EPW apply to an OD. When an OD is adjudicated by a military tribunal and determined to be a CI, he is removed from the EPW facility and treated as a CI. This chapter discusses the internment process after a military tribunal adjudicates a civilian and determines that he should be interned. A CI internment facility runs parallel to an EPW internment facility, with some differences.

A CI—
• Is protected under the provisions of the GC.
• Does not meet the criteria for classification as an EPW or an RP.
• Is considered a security risk.
• Needs protection because he committed an offense against the detaining power (insurgents, criminals, or other persons).

NOTE: AR 190-8 provides detailed information on the administration of a CI internment facility and the treatment of CIs.

5-1. Do not physically torture or use moral coercion against CIs. This does not prevent the use of minimum force necessary to enforce measures authorized or directed by AR 190-8. Ensure that CIs are treated with respect and protected against—
• Violence.
• Insult.
• Public curiosity.
• Bodilyinjury.
• Reprisal.
• Sexual attack (molestation, prostitution, or any form of indecent assault).

5-2. Treat CIs considerately, without adverse distinction based on race, religion, political opinion, sex, or age. The following are prohibited:
• Measures that may cause physical suffering or death.
• Intimidation.
• Terrorism.
• Reprisal.
• Hostageacts.
• Deportation from the occupied territory to the territory of the occupying power or any other country (occupied or not).

5-3. The CIs can apply for assistance from protecting powers, the ICRC, approved religious organizations, relief societies, and others. Within the limits of military and security considerations, these organizations are allowed access and facilities to assist CIs.

5-4. The internment of protected civilians is authorized and directed if the following requirements are met:
• Internment is necessary (as determined by competent US military authority) for the security of US armed forces in the occupied territory.
• Internment is directed (by a properly constituted US military court in the occupied territory) as the sentence for an offense that violates penal provisions issued by the occupying US armed forces.

5-5. A protected civilian in the occupied territory is accepted for internment upon receipt of one of the following:
• An internment order for imperative security reasons authenticated by a commissioned officer who is delegated authority by the TO commander.
• An order of an authorized commander, approving and ordering into execution, a sentence to internment pronounced by a properly constituted US military court in the occupied territory.

5-6. A CI can request compassionate internment of his dependent children who are without parental care in the occupied territory. This is normally granted after coordination with SJA when both parents or the only surviving parent is interned.

5-15. Internees who meet the requirements in the Geneva Conventions and AR 190-8 are entitled to the protected CI status. Process them as follows:
• Issue an ISN to each processed CI using the procedures in Chapter 4 for EPWs. Ensure that the letters “CI” follow the last number of the ISN.
• Complete DA Form 2663-R in duplicate for each CI and each dependent child. Place one copy in the CI’s personnel file, which is transferred with him; and forward the other copy to the IRIC.
• Prepare DA Form 2674-R for each facility housing CIs and for each hospital where CIs are assigned. Account for all captives classified as CIs, captives who had a DA Form 4237-R prepared, and dependent children who received compassionate internment.
• Issue DA Form 2677-R to each processed CI. Direct him to retain the card at all times.
• Complete DA Form 2678-R in duplicate. Forward one copy to the CI information agency and the other copy to a relative.
• Prepare DA Form 4237-R for each protected civilian processed in the occupied territory as a CI or a dependent child. Stamp the letters “CI” on the top and bottom of each form.

5-16. Dependent children who are interned with their CI parents are not classified as CIs or processed, except as required on DA Forms 2663-R, 2674-R, and 4237-R. When dependent children reside in the facility with their parents, they are cared for, accounted for, and managed like their parents. House children and parents together in facilities that allow them to lead a normal family life. Children under the age of 12 are identified by wearing an ID badge or wristband. Ensure that children under the age of 15, who are orphaned or separated from their families as a result of the war, are not left to their own resources. 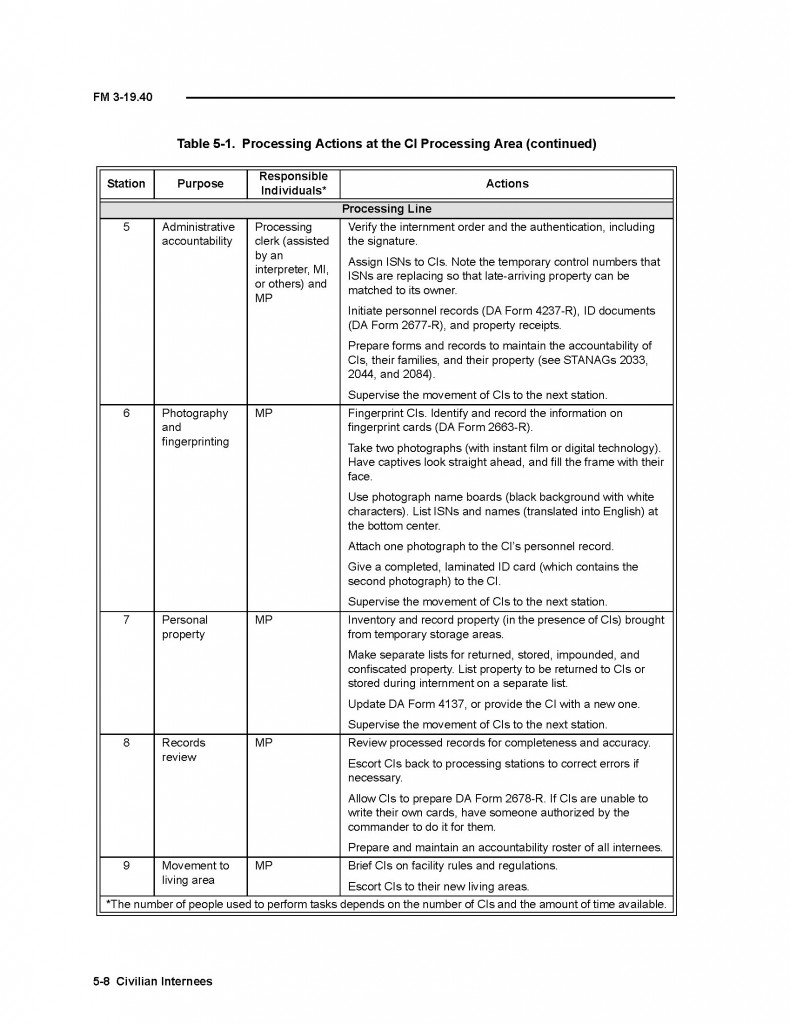 5-59. Encourage and support an active, intellectual education program for CIs. Coordinate adequate facilities and instruction material through local agencies. Consider the following when developing an education program:
• Levels of education throughout the CI population.
• Basic courses of education, including—