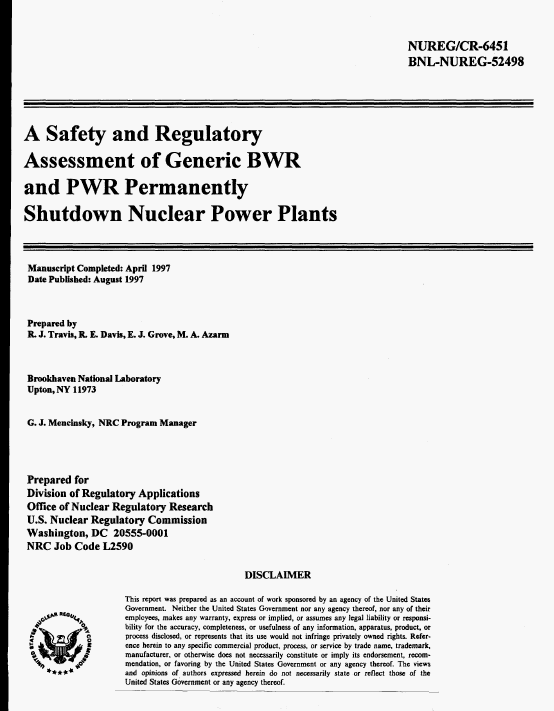 An evaluation of the nuclear power plant regulatory basis is performed, as it pertains to those plants that are permanently shutdown (PSD) and waiting or undergoing decommissioning. Four spent fuel storage configurations are examined. Recommendations are provided for those operationally based regulations that could be partially or totally removed for PSD plants without impacting public health and safety.

The purpose of this section is to define the input assumptions for each spent fuel storage configuration to support the consequence analyses of the next section. A set of assumptions was developed that is used in Section 4 to provide an estimate of the accident consequences that envelope future end of life nuclear power plant shutdowns, as well as plants that have prematurely ceased operation. However, an effort has been made to avoid unduly pessimistic assumptions or combinations of assumptions. The accident consequences thus obtained, are believed to be reasonably bounding for present and future closures and are not so overly conservative as to clearly represent some high (but unspecified) percentile result. The input assumptions for each configuration will be discussed for PWRs and BWRs, respectively. Table 3.1 presents a summary of this section.

Spent fuel storage Configuration 1 commences immediately after the permanently shutdown facility has completed the reactor vessel defueling. This configuration models the potential consequences of rapid zircaloy oxidation resulting from an event which has caused the draining of the spent fuel pool. After a suitable time period, dependent on assembly burnup and racking geometry, the decay heat is low enough to preclude the rapid oxidation phenomenon. The end of this configuration is defined as that point in time when the fuel decay heat is low such that the cladding remains intact upon extended exposure to the air.

The consequence analysis input assumptions for Configuration 1 are provided below in the form of generic PWR and BWR plant configurations.

The representative PWR* chosen for this study is a single 1130 MWe unit with 193 assemblies in the core. The corresponding 1155 MWe BWR has 764 assemblies. In accord with the industry trend to maximize storage capacity, both plants have high density fuel racking geometries.** The PWR spent fuel racks have a 10.40 inch cell to cell pitch and a five inch orifice at the bottom of each cell. The BWR spent fuel racks a 6.255 inch pitch. Each BWR cell has a 4-inch orifice. Variation in these parameters exist among various rack designs and manufacturers. These values were chosen to represent typical attributes.