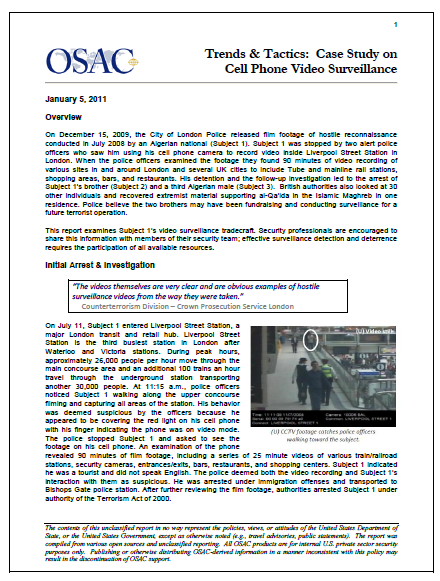 On December 15, 2009, the City of London Police released film footage of hostile reconnaissance conducted in July 2008 by an Algerian national (Subject 1). Subject 1 was stopped by two alert police officers who saw him using his cell phone camera to record video inside Liverpool Street Station in London. When the police officers examined the footage they found 90 minutes of video recording of various sites in and around London and several UK cities to include Tube and mainline rail stations, shopping areas, bars, and restaurants. His detention and the follow-up investigation led to the arrest of Subject 1’s brother (Subject 2) and a third Algerian male (Subject 3). British authorities also looked at 30 other individuals and recovered extremist material supporting al-Qa’ida in the Islamic Maghreb in one residence. Police believe the two brothers may have been fundraising and conducting surveillance for a future terrorist operation.

This report examines Subject 1’s video surveillance tradecraft. Security professionals are encouraged to share this information with members of their security team; effective surveillance detection and deterrence requires the participation of all available resources.

Based on what is known of al-Qa’ida training, heavy emphasis is placed on using cameras (still and video) for both overt and covert surveillance. In 2001, al-Qa’ida operative L’Hoyssaine Kherchtou testified in New York City that he took a two-week surveillance seminar in a training camp in Pakistan in 1992. When asked if he trained in any particular equipment to use during surveillance, he replied, “Yes. We were trained how to use different cameras, especially small ones, develop the pictures, and to take the pictures holding the camera so that the surveillant is not looking through it.” Today, the ubiquity of small hand-held cameras and cell phones equipped with cameras add another dimension to this threat. They are easy to use and can be easily shared with other members of the surveillance team.

Timely and accurate reporting of suspicious actions by organization personnel is essential to spot, deter, or disrupt a terrorist operation. The U.S. private sector should encourage their staff to report any suspicious event, no matter how innocuous it may seem. It is important to report what type of suspicious behavior was noticed and where it was detected. Understanding and appreciating where the activity took place will assist in understanding what might be of interest – that is, the potential target. It should be emphasized that terrorist surveillance indicates a group’s interest in a specific target or the search for options. It does not automatically signal a group’s intent to attack.