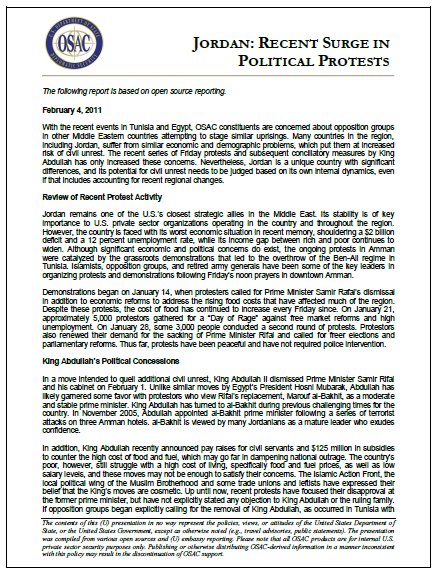 Jordan remains one of the U.S.’s closest strategic allies in the Middle East. Its stability is of key importance to U.S. private sector organizations operating in the country and throughout the region. However, the country is faced with its worst economic situation in recent memory, shouldering a $2 billion deficit and a 12 percent unemployment rate, while its income gap between rich and poor continues to widen. Although significant economic and political concerns do exist, the ongoing protests in Amman were catalyzed by the grassroots demonstrations that led to the overthrow of the Ben-Ali regime in Tunisia. Islamists, opposition groups, and retired army generals have been some of the key leaders in organizing protests and demonstrations following Friday’s noon prayers in downtown Amman.

Demonstrations began on January 14, when protesters called for Prime Minister Samir Rafai’s dismissal in addition to economic reforms to address the rising food costs that have affected much of the region. Despite these protests, the cost of food has continued to increase every Friday since. On January 21, approximately 5,000 protestors gathered for a “Day of Rage” against free market reforms and high unemployment. On January 28, some 3,000 people conducted a second round of protests. Protestors also renewed their demand for the sacking of Prime Minister Rifai and called for freer elections and parliamentary reforms. Thus far, protests have been peaceful and have not required police intervention.

In a move intended to quell additional civil unrest, King Abdullah II dismissed Prime Minister Samir Rifai and his cabinet on February 1. Unlike similar moves by Egypt’s President Hosni Mubarak, Abdullah has likely garnered some favor with protestors who view Rifai’s replacement, Marouf al-Bakhit, as a moderate and stable prime minister. King Abdullah has turned to al-Bakhit during previous challenging times for the country. In November 2005, Abdullah appointed al-Bakhit prime minister following a series of terrorist attacks on three Amman hotels. al-Bakhit is viewed by many Jordanians as a mature leader who exudes confidence.

In addition, King Abdullah recently announced pay raises for civil servants and $125 million in subsidies to counter the high cost of food and fuel, which may go far in dampening national outrage. The country’s poor, however, still struggle with a high cost of living, specifically food and fuel prices, as well as low salary levels, and these moves may not be enough to satisfy their concerns. The Islamic Action Front, the local political wing of the Muslim Brotherhood and some trade unions and leftists have expressed their belief that the King’s moves are cosmetic. Up until now, recent protests have focused their disapproval at the former prime minister, but have not explicitly stated any objection to King Abdullah or the ruling family. If opposition groups began explicitly calling for the removal of King Abdullah, as occurred in Tunisia with Ben-Ali and Mubarak in Egypt, it is possible that these calls may provoke a harsher reaction from the security forces. Thus far, however, dissent has focused on general government transparency issues and economic reforms, and protests have remained peaceful with no police intervention.