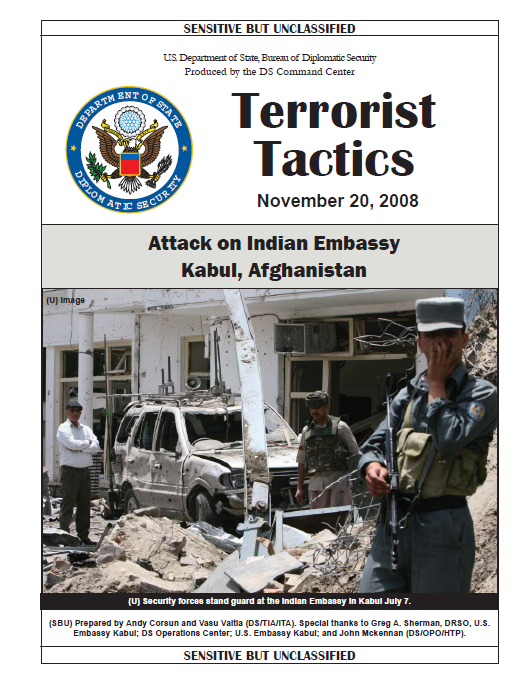 (SBU) In the early-morning hours of July 7, a suicide vehicle-borne improvised explosive device (SVBIED) detonated outside the Indian Embassy in Kabul, Afghanistan. The explosion killed 60 people and injured over 100. This was the deadliest terrorist attack in Kabul since the Taliban government was ousted from power in 2001. This issue of Terrorist Tactics describes how this well-planned attack was carried out and how it possibly could have been avoided if host-country security personnel manning the checkpoint near the embassy were more aggressive in their vehicle inspections. As of this report, no group has claimed responsibility for the attack.

The attack “In no culture, no country, and no religion is there any excuse for such acts.”  Kai Eide, Head of the United Nations Assistance Mission in Afghanistan (SBU) At approximately 8:30 a.m. on July 7, an Indian Embassy vehicle (unarmored Toyota Land Cruiser bearing red diplomatic license plates) containing the driver, Indian political counselor, and defense attaché passed through a checkpoint manned by Afghan officers. After going through the checkpoint, the vehicle proceeded to the Indian Embassy. As the Land Cruiser entered the front gate of the mission, Indian guards manning the gate noticed a gray Toyota Hilux Surf SUV with only a driver directly behind the embassy vehicle. The guards quickly lowered the barricade behind the mission vehicle, preventing the Hilux Surf from moving forward. At this point, the sequence of events leading up to the explosion is unclear. One theory is that after lowering the barricade, embassy guards were about to challenge the driver of the Hilux Surf. Realizing that he could not advance any further, the driver detonated the bomb.

The explosion reportedly killed 60 people, including the occupants of the diplomatic vehicle. Over 100 people were injured. Many of those killed and injured were pedestrians waiting on the visa application/consular line in front of the embassy.

(SBU) A forensic investigation estimated the SVBIED contained several hundred pounds of high explosives. The device was most likely command
detonated, and it is believed the bomber planned to detonate the SVBIED once he was inside the embassy compound. Investigators note that much of the force of the blast was absorbed and greatly reduced by the main embassy gate, perimeter wall, and dirt-/sandfilled blast barriers that were placed across the embassy for extra protection one week prior to the attack. Though the Indian Embassy SUV was not armored, in this instance, a fully armored vehicle would have been ineffective against an SVBIED loaded with so many explosives and positioned just behind the targeted vehicle.

“Where is the security?”

The father of two victims

(SBU) In Afghanistan, SUVs are used predominately by various embassies and non-governmental organizations. It is conceivable the offi cers manning the checkpoint knew this and let the vehicles pass through without conducting a vehicle Toyota Land Cruiser Toyota Hilux Surf inspection. Secondly, the SVBIED was a Toyota Hilux Surf, which is smaller in size but very similar in appearance to the Toyota Land Cruiser used by the Indian Embassy. (Note: The Toyota Hilux Surf is sold outside Japan, primarily in the U.S. as the Toyota 4Runner.) Since the vehicles were almost identical in appearance and traveled together as they passed through the checkpoint, this may have added to the false impression that both vehicles were attached to the Indian Embassy. It was recently reported that when the suicide bomber was going through the checkpoint, he looked at one of the guards and pointed his fi nger at the Indian diplomatic vehicle in front of him as if to indicate both vehicles were traveling together. Finally, the checkpoint is located in a section of the city that is congested with vehicular and pedestrian traffi c. Perhaps in an effort to keep the earlymorning traffic moving, the offi cers at the checkpoint let the two “official” vehicles pass through unchallenged. 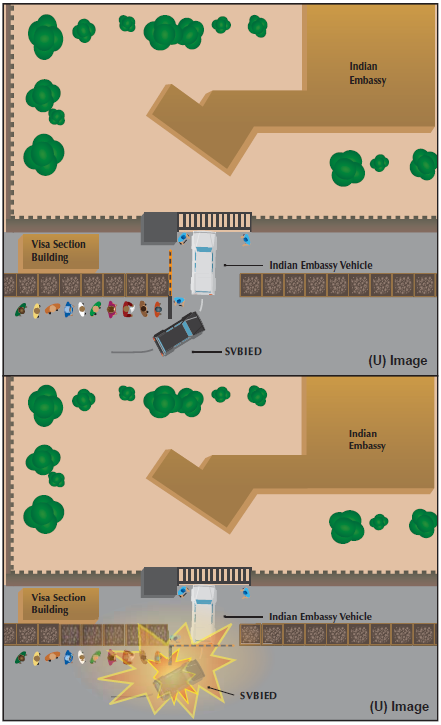