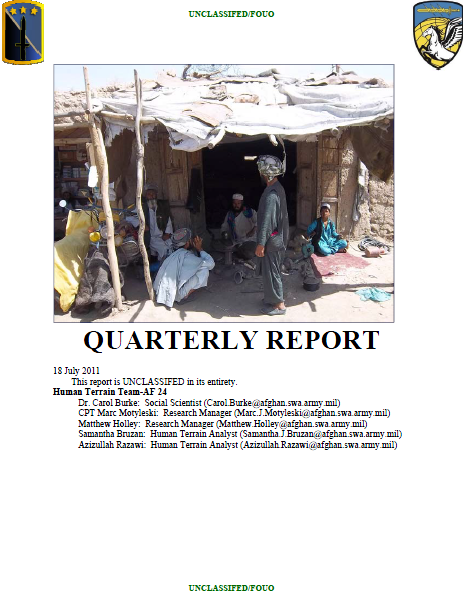 Drought is taking its toll on farmers in the western areas of RC north. The first sign appeared in early spring. Realizing that the grazing land was going to be insufficient to support their flocks, farmers began slaughtering more of their sheep than usual. This, in turn, produced a temporary glut of lamb and a drop in what the farmer could expect from each animal. Faced with insufficient grazing land, some farmers are opting to move their animals to higher ground and to fields that can still provide a bit of nourishment for their hungry animals. Farmers in Jowzjan, for example, are moving their sheep down into Faryab. If current conditions worsen, flare-ups over common grazing lands may occur; local farmers may be unwilling to share valuable terrain with those they view as intruders.

All the farmers we have spoken with have noted the dramatic downturn in the yield of all crops, especially the all-important wheat harvest. Drought has severely diminished this year’s wheat harvest in the west of RC-North and escalated the price for flour for the average consumer. In response to a worsening economy, a few farmers have planted small fields of poppies, a crop that can tolerate dry conditions much better than wheat, watermelon, grapes, and tomatoes, the typical cash crops of the region. The poppy farmers are hoping, no doubt, that the lucrative profits from a small amount of opium will offset the shortfall of other crops. Some farmers have gone to Iran or sent their sons to Iran to seek jobs in construction in order to support their families, leaving behind villages even more vulnerable to insurgent influence. Without sufficient food for their families, other military aged men will, no doubt, be more susceptible to offers from insurgent leaders.

Local governance in rural Afghanistan is not simple. Older customary local assemblies operate alongside GIRoA officials, Community Development Councils (CDC’s), and insurgent groups. Although we speak of insurgent governments as “shadow governments,” they rarely exist in the shadows for those over whom they wield power. In villages where insurgents continue to exercise control, the insurgents and not GIRoA perform traditional governmental functions; they levy taxes, resolve disputes (they are, in many villages the only law in town), and maintain local defense forces.

Western Powers have invested their hope and their treasure in inventing a new form of local control: Community District Councils that come out of the National Solidarity Program (NSP). Managed by the Ministry of Rural Rehabilitation and Development (MRRD) with funds from NGO’s and from the World Bank, these organizations set priorities for the expenditure of donor money and oversee contracts. Although they offer an alternative to the indiscriminate funding of the past that encouraged favoritism and corruption, these organizations have little authority except when it comes to the stewardship of outside money. As those development funds begin to dry up, will CDC’s vanish? Can they be further empowered?

Customary organizations like shuras, on the other hand, continue in many rural areas to function as they have for generations raising collective concerns and resolving disputes. In districts like Ghormach insurgents have exerted considerable influence on these local shuras. In the last few months we have learned a good deal about these governing bodies. We recommend that ISAF forces use these local shuras as vehicles through which they can engage villagers and increase security. Our efforts have focused on obtaining information for our brigade, battalion, and companies located in Ghormach and Qeysar that identifies individuals with whom they may want to engage.