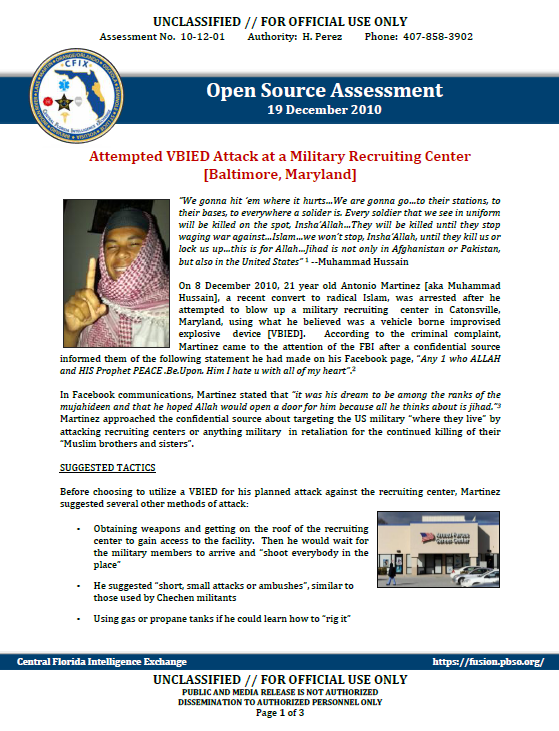 “We gonna hit ‘em where it hurts…We are gonna go…to their stations, to their bases, to everywhere a solider is. Every soldier that we see in uniform will be killed on the spot, Insha’Allah…They will be killed until they stop waging war against…Islam…we won’t stop, Insha’Allah, until they kill us or lock us up…this is for Allah…Jihad is not only in Afghanistan or Pakistan, but also in the United States”  –Muhammad Hussain

On 8 December 2010, 21 year old Antonio Martinez [aka Muhammad Hussain], a recent convert to radical Islam, was arrested after he attempted to blow up a military recruiting center in Catonsville, Maryland, using what he believed was a vehicle borne improvised explosive device [VBIED]. According to the criminal complaint, Martinez came to the attention of the FBI after a confidential source informed them of the following statement he had made on his Facebook page, “Any 1 who ALLAH and HIS Prophet PEACE .Be.Upon. Him I hate u with all of my heart”.

In Facebook communications, Martinez stated that “it was his dream to be among the ranks of the mujahideen and that he hoped Allah would open a door for him because all he thinks about is jihad.” Martinez approached the confidential source about targeting the US military “where they live” by attacking recruiting centers or anything military in retaliation for the continued killing of their “Muslim brothers and sisters”.

Before choosing to utilize a VBIED for his planned attack against the recruiting center, Martinez suggested several other methods of attack:
• Obtaining weapons and getting on the roof of the recruiting center to gain access to the facility. Then he would wait for the military members to arrive and “shoot everybody in the place”
• He suggested “short, small attacks or ambushes”, similar to those used by Chechen militants
• Using gas or propane tanks if he could learn how to “rig it”
• Burning the building down which he felt would “instill fear” and send a message that “whoever joins the military, they would be killed”
• Throwing “cocktail bombs” into the recruiting center and shooting military personnel as they run out of the building
• Martinez also mentioned needing a “big petroleum truck full of gasoline” and the possibility of blowing up Andrews Air Force Base [he suggested starting “small” and “taking over their bases and their homes”]

Having knowledge about Islam is no longer necessary to become an activist for the cause. Many are now becoming radicalized simply from reading and listening to militant propaganda shown on the news, internent and Islamic forums, which allows for a much shorter time period between radicalization and participation in an attack, as seen with Martinez’s arrest. Martinez’s criminal complaint indicates that he had accounts on popular social networking sites such as YouTube and Facebook, both of which have been used by other subjects arrested on similar charges over the last couple of years.

The criminal complaint also makes reference to some specific individuals and websites that Martinez frequented or spoke of during the investigation:
• Yemeni-American, Anwar Awlaki, is an inspirational cleric and leading English language al Qaeda internet recruiter and propagandist who advocates for American Muslims to commit Jihad against the U.S. and other western countries. Anwar al-Awlaki has become a religious icon who has inspired others, particularly in the West, to pursue violent jihad. Over the last several years, Awlaki has transformed his role from spiritual leader and mentor to active recruiter and advocate for Al-Qa’ida in Yemen.

“…Nidal Hasan is a student of mine, and I am proud of this…I support what he did, and I call upon anyone who calls himself a Muslim, and serves in the U.S. Army, to follow in the footsteps of Nidal Hasan…” –Anwar Awlaki

• Omar Bakri Muhammad, a Syrian born cleric who helped develop radical organizations Hizb ut-Tahrir and al-Muhajiroun. His lectures are widely available on the internet and during 2010 live lectures were available on the ‘Authentic Tawheed’ website, along with live lectures from other radical clerics such Abdullah Faisal and Anjem Choudary.

“We don’t make a distinction between civilians and non-civilians, innocents and non-innocents. Only between Muslims and unbelievers. And the life of an unbeliever has no value. It has no sanctity”. –Sheikh Omar Bakri Muhammad