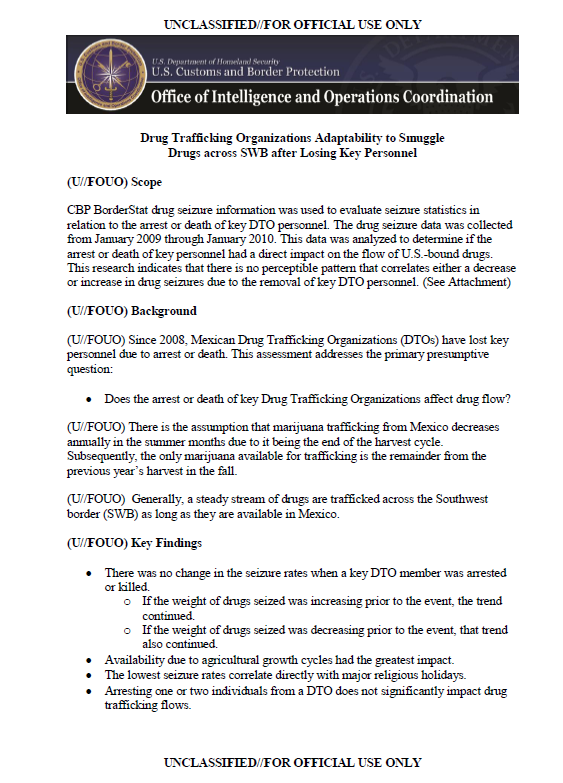 CBP BorderStat drug seizure information was used to evaluate seizure statistics in relation to the arrest or death of key DTO personnel. The drug seizure data was collected from January 2009 through January 2010. This data was analyzed to determine if the arrest or death of key personnel had a direct impact on the flow of U.S.-bound drugs. This research indicates that there is no perceptible pattern that correlates either a decrease or increase in drug seizures due to the removal of key DTO personnel. (See Attachment)

(U//FOUO) Since 2008, Mexican Drug Trafficking Organizations (DTOs) have lost key personnel due to arrest or death. This assessment addresses the primary presumptive question:

(U//FOUO) There is the assumption that marijuana trafficking from Mexico decreases annually in the summer months due to it being the end of the harvest cycle. Subsequently, the only marijuana available for trafficking is the remainder from the previous year’s harvest in the fall.

(U//FOUO) Generally, a steady stream of drugs are trafficked across the Southwest border (SWB) as long as they are available in Mexico.

(U//FOUO) The total amount of drugs trafficked across the SWB is unknown.

(U//FOUO) The removal of key personnel does not have a discernable impact on drug flows as determined by seizure rates. DTO operations appear to have built in redundancy and personnel that perform specific duties to limit the damage incurred by the removal of any one person. By sheer volume alone, drug operations would require more than one individual to coordinate and control the process. While the continued arrest or death of key DTO leadership may have long-term implications as to the control and viability of a specific DTO, there is no indication it will impact overall drug flows into the United States. 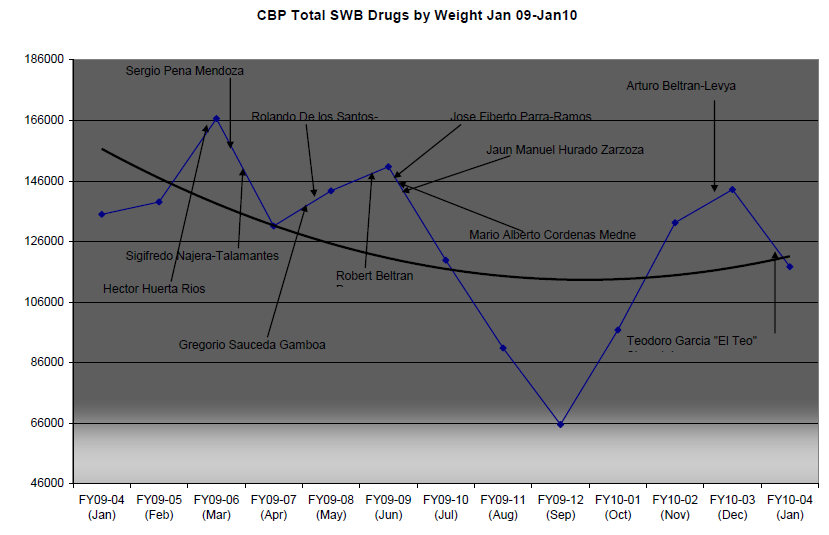