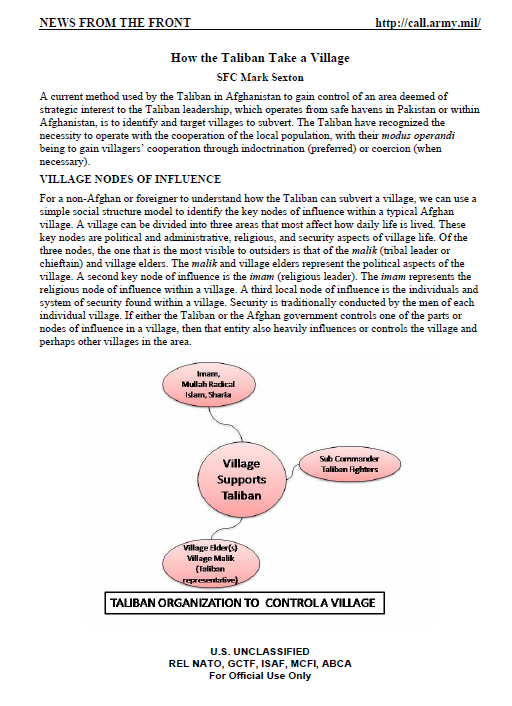 NEWS FROM THE FRONT

A current method used by the Taliban in Afghanistan to gain control of an area deemed of strategic interest to the Taliban leadership, which operates from safe havens in Pakistan or within Afghanistan, is to identify and target villages to subvert. The Taliban have recognized the necessity to operate with the cooperation of the local population, with their modus operandi being to gain villagers’ cooperation through indoctrination (preferred) or coercion (when necessary).

For a non-Afghan or foreigner to understand how the Taliban can subvert a village, we can use a simple social structure model to identify the key nodes of influence within a typical Afghan
village. A village can be divided into three areas that most affect how daily life is lived. These
key nodes are political and administrative, religious, and security aspects of village life. Of the
three nodes, the one that is the most visible to outsiders is that of the malik (tribal leader or
chieftain) and village elders. The malik and village elders represent the political aspects of the
village. A second key node of influence is the imam (religious leader). The imam represents the
religious node of influence within a village. A third local node of influence is the individuals and
system of security found within a village. Security is traditionally conducted by the men of each
individual village. If either the Taliban or the Afghan government controls one of the parts or
nodes of influence in a village, then that entity also heavily influences or controls the village and
perhaps other villages in the area.

The Taliban look for villages and areas within which they can operate and use as a base against
US and Afghan forces. Areas with little US or Afghan police or army presence are prime areas
the Taliban will initially seek to subvert and hold. The Taliban build networks by getting a
fighter, religious leader, or village elder to support them. Whichever one or more are initially
used will be exploited for tribal and familial ties. The village politics administered by the elders
and represented by an appointed malik are the most identifiable node of influence of any
particular village. The Taliban will attempt to sway those maliks who are not supportive by
discussion and, if necessary, threats, violence, or death. In villages where the locals say there is
no malik, it is usually described as a convenience to the village as “no one wants the position,” or
sometimes “the elders cannot agree on a malik so it is better there is none.” In these cases it is
most likely the Taliban have neutralized the desired representative of that village. When locals
are pressed for a representative they will give you a name of a person who has come to represent
the village. This individual will also most likely be in support of and supported by the Taliban.
The Taliban will try to install a malik or “representative of the village” by coercion or force. 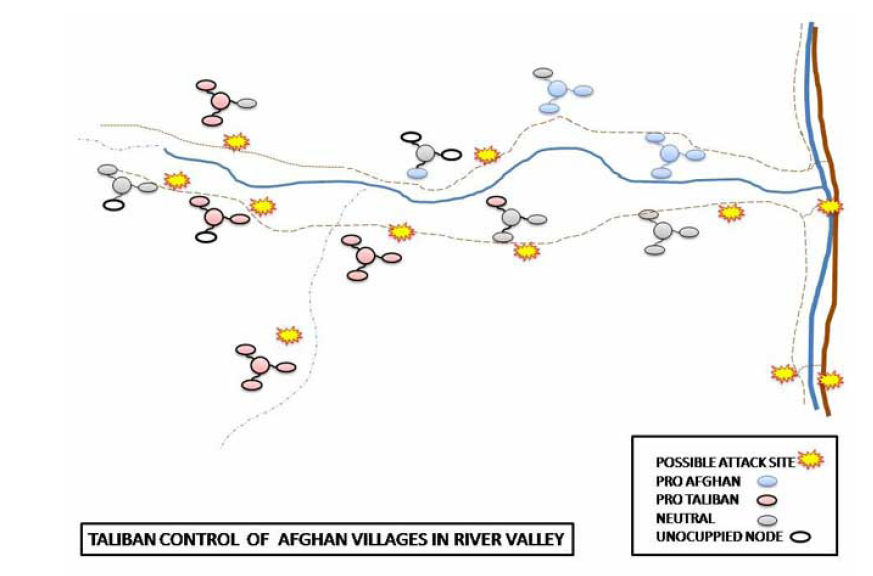