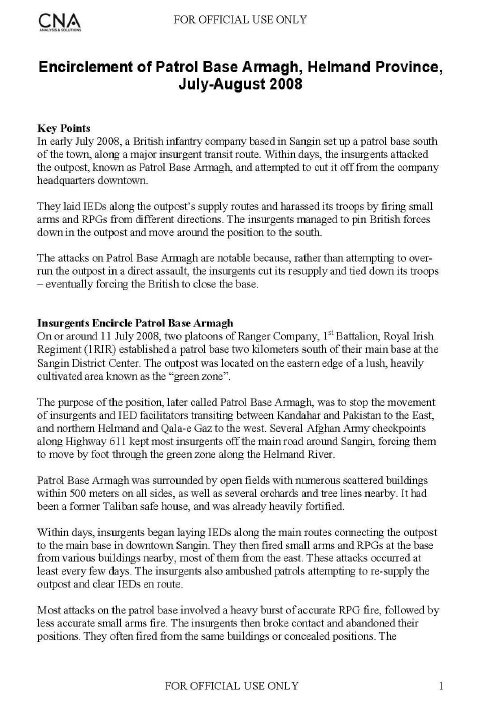 In early July 2008, a British infantry company based in Sangin set up a patrol base south
of the town, along a major insurgent transit route. Within days, the insurgents attacked
the outpost, known as Patrol Base Armagh, and attempted to cut it off from the company
headquarters downtown.

They laid IEDs along the outpost’s supply routes and harassed its troops by firing small
arms and RPGs from different directions. The insurgents managed to pin British forces
down in the outpost and move around the position to the south.

The attacks on Patrol Base Armagh are notable because, rather than attempting to overrun
the outpost in a direct assault, the insurgents cut its resupply and tied down its troops
– eventually forcing the British to close the base.

On or around 11 July 2008, two platoons of Ranger Company, 1st Battalion, Royal Irish
Regiment (1RIR) established a patrol base two kilometers south of their main base at the
Sangin District Center. The outpost was located on the eastern edge of a lush, heavily
cultivated area known as the “green zone”.

The purpose of the position, later called Patrol Base Armagh, was to stop the movement
of insurgents and lED facilitators transiting between Kandahar and Pakistan to the East,
and northern Helmand and Qala-e Gaz to the west. Several Afghan Army checkpoints
along Highway 611 kept most insurgents off the main road around Sangin, forcing them
to move by foot through the green zone along the Helmand River.

Patrol Base Armagh was surrounded by open fields with numerous scattered buildings
within 500 meters on all sides, as well as several orchards and tree lines nearby. It had
been a former Taliban safe house, and was already heavily fortified.

Within days, insurgents began laying IEDs along the main routes collecting the outpost
to the main base in downtown Sangin. They then fired small arms and RPGs at the base
from various buildings nearby, most of them from the east. These attacks occurred at
least every few days. The insurgents also ambushed patrols attempting to re-supply the
outpost and clear IEDs en route.

Most attacks on the patrol base involved a heavy burst of accurate RPG fire, followed by
less accurate small arms fire. The insurgents then broke contact and abandoned their
positions. They often fired from the same buildings or concealed positions. The﻿ insurgents attacked in 3-6 three-man teams spread out in different firing locations. If one was injured or killed, the other two would evacuate the casualty. 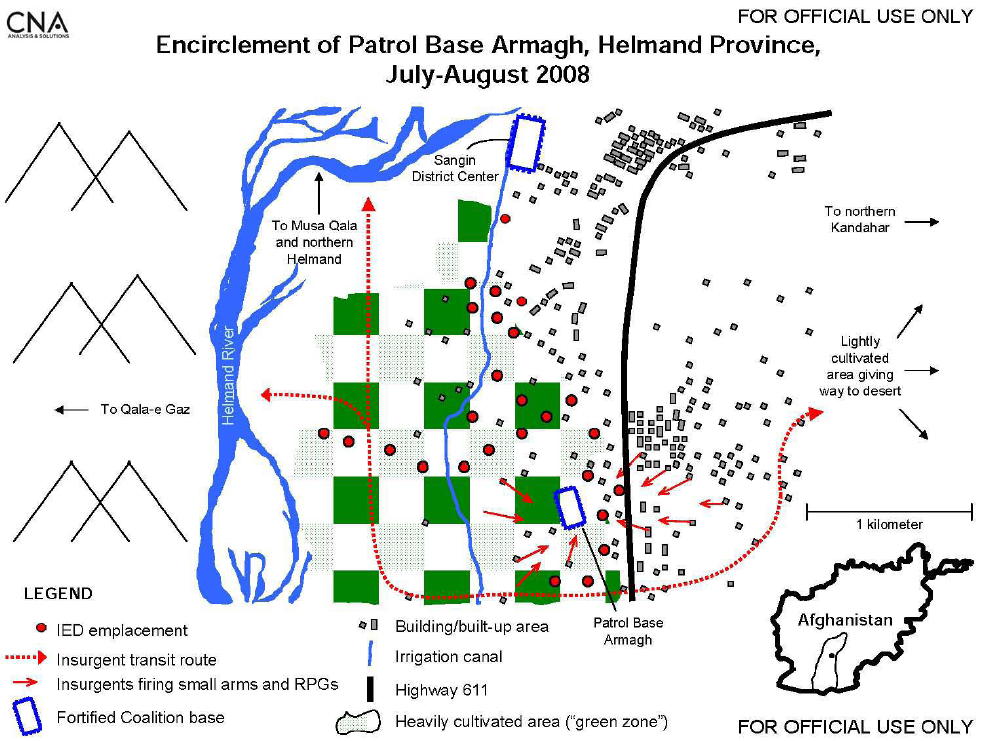