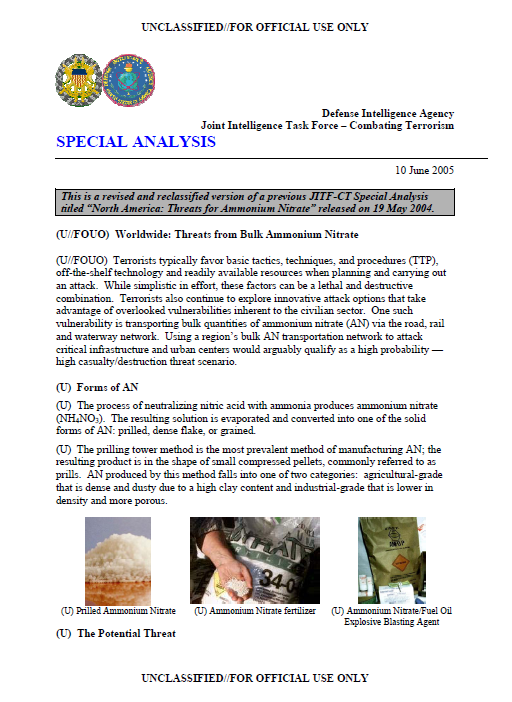 (U//FOUO) Terrorists typically favor basic tactics, techniques, and procedures (TTP), off-the-shelf technology and readily available resources when planning and carrying out an attack. While simplistic in effort, these factors can be a lethal and destructive combination. Terrorists also continue to explore innovative attack options that take advantage of overlooked vulnerabilities inherent to the civilian sector. One such
vulnerability is transporting bulk quantities of ammonium nitrate (AN) via the road, rail and waterway network. Using a region’s bulk AN transportation network to attack critical infrastructure and urban centers would arguably qualify as a high probability — high casualty/destruction threat scenario.

(U) The process of neutralizing nitric acid with ammonia produces ammonium nitrate (NH4NO3). The resulting solution is evaporated and converted into one of the solid forms of AN: prilled, dense flake, or grained.

(U) The prilling tower method is the most prevalent method of manufacturing AN; the resulting product is in the shape of small compressed pellets, commonly referred to as prills. AN produced by this method falls into one of two categories: agricultural-grade that is dense and dusty due to a high clay content and industrial-grade that is lower in density and more porous.﻿

(U//FOUO) The primary industrial use of AN is for explosives applications; a fuel additive combined with industrial grade AN produces an explosive blasting agent called ammonium nitrate fuel oil (ANFO). While distinctive properties are desired for industrial-grade AN prills, an individual with basic “text book” knowledge can readily transform agricultural or industrial grade AN into a high explosive with minimal effort. Several terrorist groups understand this concept and several recovered terrorist training manuals document the associated procedures. Terrorists are also familiar with fuel alternatives other than fuel oil to increase the sensitivity and energy output potential.

(U//FOUO) AN is inexpensive and widely available throughout the world; 2001 international trade for agricultural grade AN exceeded 2.7 million tons. Mass stocks of AN are available at AN production plants, agricultural supply stores and aboard transport means, specifically truck, rail, and barge. Barge transport via river intracoastal networks is extensively used in transporting AN. Table 1 summarizes the capacities of the three modes of transportation used to transport AN. Note the substantial TNT equivalency for each mode.

(U//FOUO) Terrorists who commercially appropriate AN and mix other readily available explosive precursors present a perceivable worldwide threat, as demonstrated by the explosive used in the vehicle-borne improvised explosive device (VBIED) attack against the Murrah Federal Building attack in Oklahoma City in 1995. Less recognized by law enforcement and DoD force protection is the potential for terrorists to exploit the bulk AN transportation networks of the United States and other countries to attack critical infrastructure and urban centers. Terrorist organizations that apply basic TTPs, off-theshelf technology, and readily available resources against AN shipments pose a credible threat to the US and assets abroad. 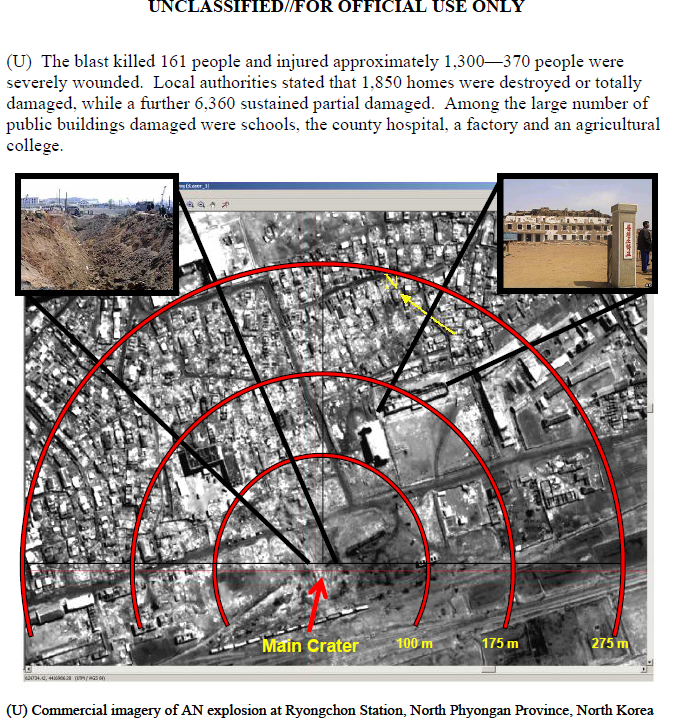