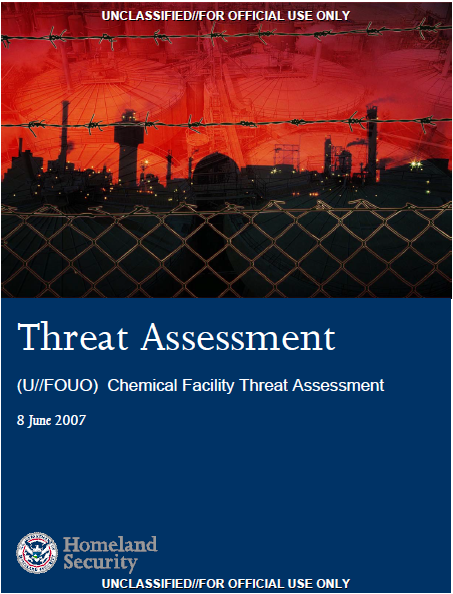 (U) The DHS Homeland Infrastructure Threat and Risk Analysis Center produced this threat assessment to support implementation of 6 Code of Federal Regulations Part 27, “Chemical Facility Anti-Terrorism Standards (CFATS).” This assessment describes the potential terrorist threat to the chemical and petroleum facilities regulated under CFATS and determined to be high risk by the Secretary of Homeland Security. It does not address facilities that may hold threshold quantities of the chemicals listed in CFATS that fall outside its scope, such as public water facilities or facilities regulated under the Maritime Transportation Security Act of 2002. Nor does it address the transportation of chemicals, which is regulated under other authorities. Potential terrorist tactics against such facilities—based on DHS’ knowledge of terrorist intentions and capabilities—are included to aid industry security personnel in implementing security measures at their facilities.

(U//FOUO) Intelligence reporting indicates al-Qa‘ida, affiliated Sunni extremist groups, and other like-minded extremists continue to engage in operational planning with the intent to attack the Homeland.

— (U//FOUO) None of the reporting to date has revealed any specific or credible threats targeting facilities in the nation’s chemical sector.
— (U//FOUO) DHS has received general information on threats to U.S. petroleum infrastructure—including refineries and petrochemical plants—but has seen no credible or specific intelligence indicating an imminent terrorist threat to the sector.

(U//FOUO) The tactics terrorists are most likely to use against the nation’s chemical and petroleum infrastructure include aircraft as a weapon and vehicle-borne improvised explosive devices (VBIEDs). Many facilities also are vulnerable to cyber attacks against their supervisory control and data acquisition or business systems. Any of these tactics could include the use of insiders with access to and knowledge of sensitive facilities and systems.

— (U//FOUO) An attack on a chemical sector facility containing large quantities of toxic industrial chemicals could cause fatalities, extensive injuries, and panic, and could generate heavy media attention.
— (U//FOUO) Petroleum facilities appeal to al-Qa‘ida and its affiliates because they symbolize what Usama Bin Ladin has referred to as “Western theft of the Muslim world’s oil resources.” Islamic extremists have attacked overseas petroleum facilities, especially in the Arabian Peninsula and Iraq.

(U//FOUO) Traditional domestic extremists pose a limited threat to homeland chemical and petroleum infrastructure. Most domestic, right-wing extremists focus their ire on government entities or racial minorities. Groups such as white supremacists, neo-Nazis, and the modern-day “militias” have not yet demonstrated particular interest in chemical or petroleum infrastructure.

(U//FOUO) So-called “lone wolves”—such as individuals who have targeted the Trans-Alaska Pipeline and a California man who threatened to attack a refinery where he had worked—also pose threats to chemical and petroleum infrastructure.

(U//FOUO) Chemical and petroleum facilities use computers to monitor and process data such as flow, temperature, and pressure through supervisory control and data acquisition networks. Computers manage enterprise resource process systems and conduct automated measurement readings, while central or local control stations send signals to remote valves, opening and closing them to regulate flow or pressure or to seal them tight in an emergency. These capabilities improve the efficiency of the facility, but also expose the control systems to manipulation or disruption by malicious operatives, including terrorists.

(U//FOUO) Control systems are vulnerable to cyber attacks from inside and outside the control system network. The most elaborate boundary control program of firewalls, intrusion detection, and virus filtering will be of little help if an intruder or untrustworthy insider is able to gain physical access to servers, networks, or sensitive information.

(U//FOUO) Members of single-issue groups also may harness cyber capabilities to threaten and harass chemical and petroleum companies, although their goals are not likely to include physical destruction affecting the population and environment outside the targeted facility.