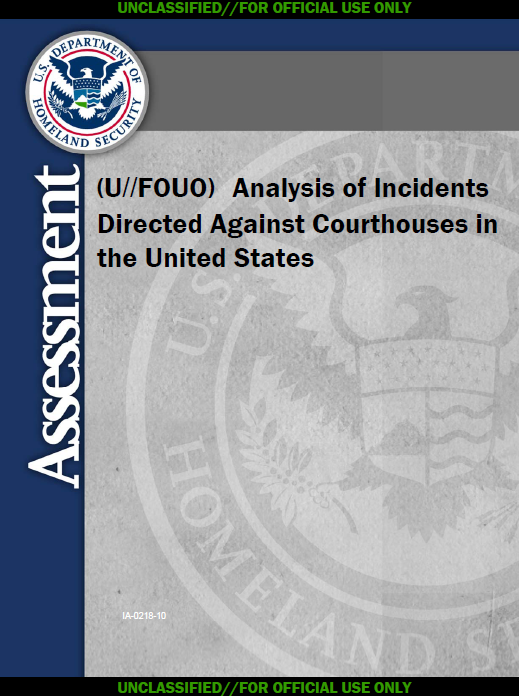 (U//FOUO) This assessment describes threats and other suspicious activities directed against courthouses in the United States over the past twelve months. Additionally, it provides indications of surveillance and suggested protective measures for vehicle-borne improvised explosive devices and homicide-suicide bombers to assist in the protection of courthouses and related facilities.

(U) Photography is one of the most commonly reported suspicious activities around the majority of critical infrastructure assets in the United States. Activities such as suspected
surveillance, photographing and videotaping facilities, and attempts to gain access
possibly to test security procedures are similar to preoperational surveillance and attack
planning techniques used by terrorists and violent extremists. During the past year,
incidents of individuals photographing federal courthouses were reported, 2 of which
were directed against the same location in California. These included:

— (U) 17 December 2009: An individual was questioned by a court security officer
after he was observed videotaping in a San Diego courtroom. The video
recording included footage of the interior and exterior of the courthouse as well as
the weapons screening area.

— (U) 6 November 2009: An individual was questioned by the police after he was
observed photographing the Niagara Falls City Courthouse.

— (U) 23 April 2009: A federal security officer observed an unidentified male
photographing the Federal Courthouse in Alexandria, Virginia from a vehicle,
using a camera equipped with a large telephoto lens.

— (U) 30 March 2009: A police officer observed an unidentified passenger in a
vehicle using a digital camera to photograph the Edward R. Roybal Federal
Building in Los Angeles.

— (U) 5 March 2009: An individual was questioned by the police after he was
observed taking pictures of the Edward R. Roybal Federal Building from his
vehicle. 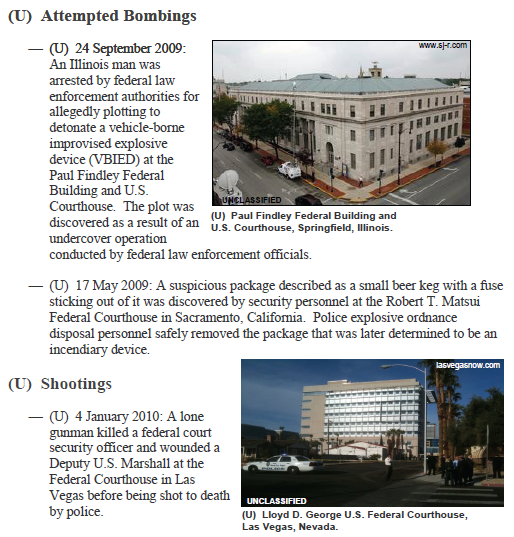