This DHS-FBI Joint Intelligence Bulletin was released on New Year’s Eve by AntiSec. 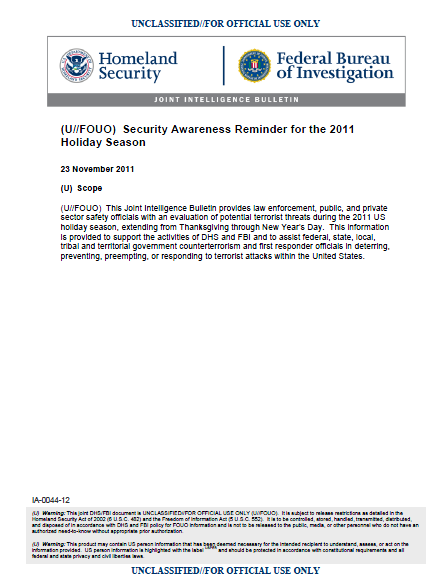 (U//FOUO) This Joint Intelligence Bulletin provides law enforcement, public, and private sector safety officials with an evaluation of potential terrorist threats during the 2011 US holiday season, extending from Thanksgiving through New Year’s Day. This information is provided to support the activities of DHS and FBI and to assist federal, state, local, tribal and territorial government counterterrorism and first responder officials in deterring, preventing, preempting, or responding to terrorist attacks within the United States.

(U//FOUO) While we are not aware of any credible terrorist threats to the Homeland specifically timed to coincide with the 2011 holiday season, attempted terrorist incidents during last year’s holiday season, as well as intelligence received over the past 12 months, suggest terrorists recognize that the large gatherings occurring during the holiday season provide an opportunity for mass casualty attacks. Attack planning, however, is likely to depend more on terrorist readiness to execute an attack rather than on a desire to attack on a specific date.

— (U//FOUO) As of February 2010, al-Qa‘ida was contemplating large attacks in the Homeland on symbolic dates and specifically identified Christmas and other prominent American holidays as key dates, presumably for attacks. We are uncertain how widely al-Qa‘ida’s interest in timing attacks to symbolic dates has been shared or accepted within the group or among its affiliates and allies, and we have no specific credible information to suggest any plotting targeting the Homeland was developed based on al-Qa‘ida’s February 2010 intent.
— (U//FOUO) On 26 November 2010, a US citizen was arrested for allegedly plotting to detonate an explosive-laden van at the annual Christmas tree lighting ceremony in Portland, Oregon. This was the first incident we know of in which a homegrown violent extremist (HVE) specifically planned an attack during a holiday event.
— (U) On 11 December 2010, an Iraqi-born Swedish citizen attempted to conduct a suicide bombing, probably targeting a crowded pedestrian shopping area in central Stockholm. The device detonated prematurely, killing only the bomber.

(U//FOUO) Although leadership losses over the past year have likely degraded their capabilities, al-Qa‘ida and allied terrorist groups continue to seek innovative ways to conduct attacks and circumvent security procedures. We remain concerned that the upcoming holiday season will provide attractive opportunities for terrorists and HVEs to target the Homeland. It is imperative that first responders and security personnel remain alert for indicators of attack planning and immediately report any suspicious activity. We continue to operate under the premise that terrorists not yet identified by the Intelligence Community and law enforcement may be operating in the United States and could advance and execute attacks without warning.