This bulletin was widely reported on in the beginning of September, yet none of the news organizations actually published the original document.   This copy of the document was obtained from the Experimental Aircraft Association. 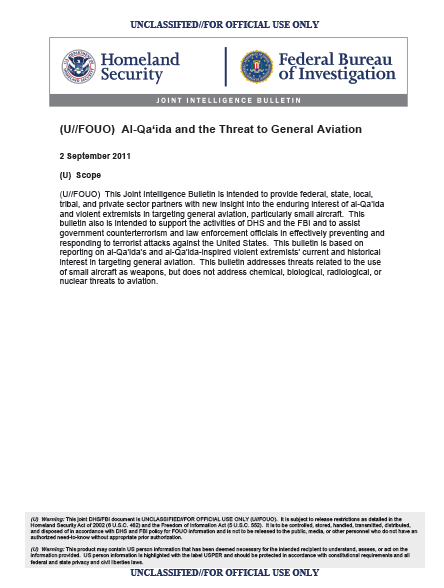 Al-Qa‘ida and the Threat to General Aviation

(U//FOUO) Al-Qa‘ida and its affiliates have maintained an interest in obtaining aviation training, particularly on small aircraft, and in recruiting Western individuals for training in Europe or the United States, although we do not have current, credible information or intelligence of an imminent attack being planned against aviation by al-Qa‘ida or its affiliates.

(U//FOUO) Al-Qa‘ida, its affiliates, and al-Qa‘ida-inspired violent extremists have targeted US aviation since the mid-1990s, using a variety of evolving tactics.

(U//FOUO) Violent extremists with knowledge of general aviation and access to small planes pose a significant potential threat to the Homeland.

(U//FOUO) As of early 2011, al-Qa‘ida considered options for targeting the aviation sector, possibly believing such operations would have a greater impact than other types of attacks.

— (U//FOUO) Al-Qa‘ida has expressed interest in finding a Western operative with official documentation that would allow him to travel to Europe and to the United States for aviation training. Al-Qa‘ida would also encourage this operative to become a flight instructor.

— (U//FOUO) Al-Qa‘ida appears to have considered renting private planes for use in attacks, believing supervision would be lax due to the large number of private aircraft.

(U//FOUO) Violent extremists have adapted and modified their tactics in response to changes in US security measures in the past, and al-Qa‘ida, its affiliates, and al-Qa‘ida inspired violent extremists will likely try to identify and exploit vulnerabilities and gaps in general aviation security, which may make attacks using small aircraft appear more achievable.

— (U) The November 2010 edition of AQAP’s Inspire magazine discusses experimenting with ways to bring down airliners and researching devices capable of passing through airport security systems.

— (U//FOUO) As of August 2009, al-Qa‘ida discussed research and development of an explosive material that could pass through airport security, as well as possibly conducting a test run with the material at an unnamed airport.

— (U//FOUO) Al-Qa‘ida believed that after September 11, 2001 there were still weaknesses and gaps in US aviation security, despite new regulations, and there could still be ways to conduct operations undetected.

(U//FOUO) Lone offenders without ties to violent extremist organizations and members of terrorist groups such as al-Qa‘ida, with general aviation training and knowledge, pose a potential threat to the Homeland because their plans to misuse or steal small aircraft would be difficult to monitor and predict. The following examples of non-terrorism related incidents in the general aviation subsector highlight the threat this tactic may pose from al-Qa‘ida, its affiliates, or al-Qa‘ida-inspired violent extremists.

— (U) In July 2010, the Bahamas deported an identified US person who had crashed a stolen private plane there; the individual later pleaded guilty in the United States to charges that included stealing and operating a small aircraft. During a cross-country burglary and vehicle theft spree that preceded his deportation, he allegedly stole other planes and traveled more than 1,000 miles by plane without flight training, learning to fly from flight manuals and the Internet.

— (U//FOUO) In April 2009, a Turkish-born Canadian stole a Cessna 172 aircraft from a flight school in Thunder Bay, Canada and flew hundreds of miles across the United States on an apparent joyride before landing on a dirt road in Missouri. The individual served a 24-month sentence in the United States for aircraft theft and was deported back to Canada in March 2011.

— (U) In January 2002, a 15-year-old boy with aviation training died when he deliberately crashed a small plane into a Florida office building. A note recovered from the scene revealed the boy’s support for bin Ladin, but there are no indications the boy had connections with terrorist organizations.

(U//FOUO) An individual motivated by one or more extremist ideologies who operates alone and supports or engages in acts of violence in furtherance of that ideology or ideologies that may involve direction, assistance, or influence from a larger terrorist organization or a foreign actor.