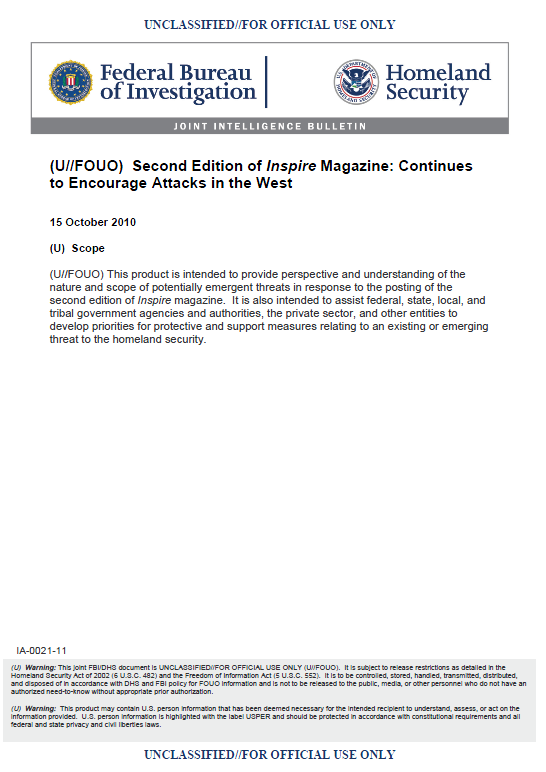 (U//FOUO) This product is intended to provide perspective and understanding of the nature and scope of potentially emergent threats in response to the posting of the second edition of Inspire magazine. It is also intended to assist federal, state, local, and tribal government agencies and authorities, the private sector, and other entities to develop priorities for protective and support measures relating to an existing or emerging threat to the homeland security.

— (U//FOUO) Included in the second installment of the “Open Source Jihad” section is an article titled “The Ultimate Mowing Machine,” which encourages would-be operatives to outfit a pick-up truck with waist-high blades and “mow” down pedestrians. A second article, “Tips for our Brothers in the United Snakes of America,” provides suggestions such as a possible Weapons of Mass Destruction (WMD) attack or an operation similar to that of alleged Fort Hood shooter Major Nidal HasanUSPER, specifically targeting a “crowded restaurant in Washington, DC at lunch” which they assert would likely kill US government employees.

— (U//FOUO) The magazine advises potential operatives to be aware of operational and communications security with suggestions to avoid using the internet or cell phones, utilize code words, and use encryption by providing specific instructions for the publicly available Mujahideen Secrets program.

— (U//FOUO) Samir Khan declared his affiliation with AQAP by naming himself as the author of “I Am Proud to be a Traitor to America.” In the article, Khan claims he could not openly express his existence as a traitor to the United States until he “was above the law” and asserted his allegiance to UBL. Khan describes his own personal story of why he left the United States but does not directly encourage others to follow his path nor does he provide instructions on how to join AQAP.

(U//FOUO) Similar to the second edition, the first edition—which was published on 11 July 2010—encouraged attacks against the West, contained an interview with a senior AQAP leader, and included articles by al-Aulaqi and UBL. The first edition also included the first installment of “Open Source Jihad” wherein AQAP provides step by step instructions for constructing a pipe bomb in an article titled “Make a Bomb in the Kitchen of Your Mom.” Both editions instructed Muslims located in the West to perform operations where they reside or travel overseas to participate in violent jihad.

(U//FOUO) We have no indications that the timing of the publication of this magazine or any tactics described therein are related to any specific, ongoing AQAP plotting against the US Homeland. We are concerned; however, the second edition of the colloquial English-language magazine could appeal to certain Western individuals and encourage them to conduct attacks in the United States in the future. The second edition is further
evidence that AQAP is trying to establish a following among a Western audience, while enhancing the group’s resonance through a consistent media campaign focused at English speakers.

(U//FOUO) We encourage reporting of suspicious activity to appropriate authorities and encourage our homeland security, military, and law enforcement partners to remain vigilant.