The following copy of a recent DHS-FBI Joint Bulletin on extremist retaliation for perceived anti-Islamic events in Afghanistan was originally obtained and published by King 5 News in Seattle. 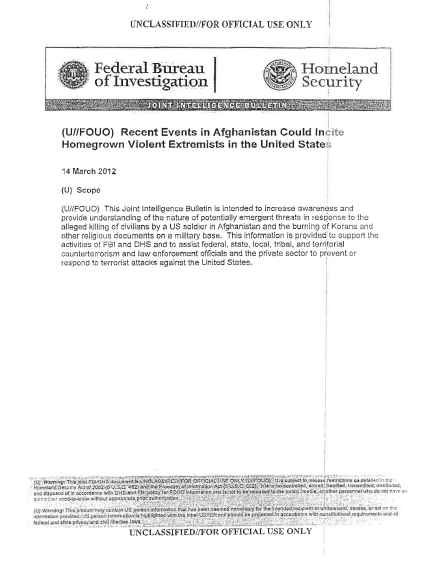 (U//FOUO) This Joint Intelligence Bulletin is intended to increase awareness and provide understanding of the nature of potentially emergent threats in response to the alleged killing of civilians by a US soldier in Afghanistan and the burning of Korans and other religious documents on a military base. This Information is provided to support the activities of FBI and DHS and to assist federal, state, local, tribal, and territorial counterterrorism and law enforcement officials and the private sector to prevent or respond to terrorist attacks against the United States.

(U//FOUO) On 11 March 2012, a US service member stationed in Afghanistan allegedly went on a shooting spree, killing 16 civilians, Including nine children, according to US press reporting. The FBI and DHS are concerned that this event could contribute to the radicalization or mobilization of homegrown violent extremists (HVEs) in the Homeland, particularly against US-based military targets, which HVEs have historically considered legitimate targets for retaliation in response to past alleged US military actions against civilians overseas.

(U//FOUO) The soldier who allegedly perpetrated the attacks reportedly trained at Joint Base Lewls-McChord near Tacoma, Washington. This base was also the training site of four soldiers convicted in 2011 of killing Afghan citizens, according to US press reporting. Abu Khalid Abdul-Latif, currently awaiting trial for plotting an attack, Initially wanted to target Lewis-McChord in retaliation for the actions of soldiers who had been stationed there. Ultimately, Abdul-Latif changed his alleged target to a Military Entrance Processing Station in Seattle, Washington, in part because he believed it was a softer target.

(U//FOUO) We assess that the alleged killing of civilians by a US soldier could trigger acts of violence by HVEs as this was a motivation that drove plotting against Joint Base Lewis-McChord. While recent high profile perceived offenses against Islam historically have led to calls for retaliation by violent extremists, they have not yet incited HVEs to attack in the United States. Nevertheless, the series of perceived anti-Mulslim and anti-Islamic events in Afghanistan since January 2012-which include graphic images of dead civilians-could cumulatively lead an HVE to mobilize to violence.

(U//FOUO) Some users of Web sites hosting violent extremist content circulated graphic images of the 11 March 2012 shooting victims, including women and children, and called for revenge against the US military. Some users stated their belief that the attack was intentionally planned by the US military and that there were more killings than reported by the media.