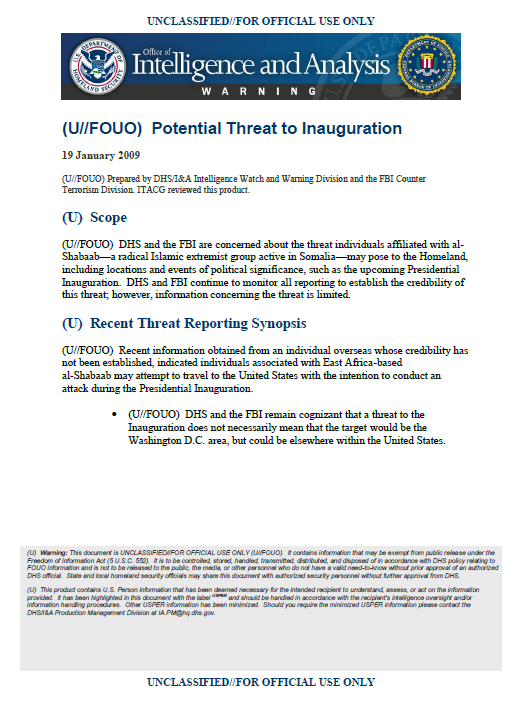 (U//FOUO) DHS and the FBI are concerned about the threat individuals affiliated with al-Shabaab—a radical Islamic extremist group active in Somalia—may pose to the Homeland, including locations and events of political significance, such as the upcoming Presidential Inauguration. DHS and FBI continue to monitor all reporting to establish the credibility of this threat; however, information concerning the threat is limited.

(U//FOUO) Recent information obtained from an individual overseas whose credibility has not been established, indicated individuals associated with East Africa-based al-Shabaab may attempt to travel to the United States with the intention to conduct an attack during the Presidential Inauguration.

(U) Potential Threat from al-Shabaab to the United States

(U//FOUO) Though past attacks perpetrated by al-Shabaab have focused on targets in Somalia—to include Somali Government officials, Ethiopian military forces and international peace keepers—the organization possesses an international support network it may be able to leverage for international operations. Al-Shabaab operates a number of militant training camps where it trains foreign fighters, and, as multiple media sources have reported, it may be able to attract recruits from within certain Somali communities inside the United States.

(U//FOUO) Al-Shabaab has demonstrated violence in furtherance of its radical ideology, resulting in its designation as a foreign terrorist organization by the US Department of State in 2008. With the Presidential Inauguration imminent, DHS and the FBI are providing state and local partners with this advisory information in an effort to raise awareness and develop further information on any possible threat.