This DHS-FBI Joint Intelligence Bulletin on the recent “credible” threat surrounding the 9/11 anniversary was originally published by the New York Post. 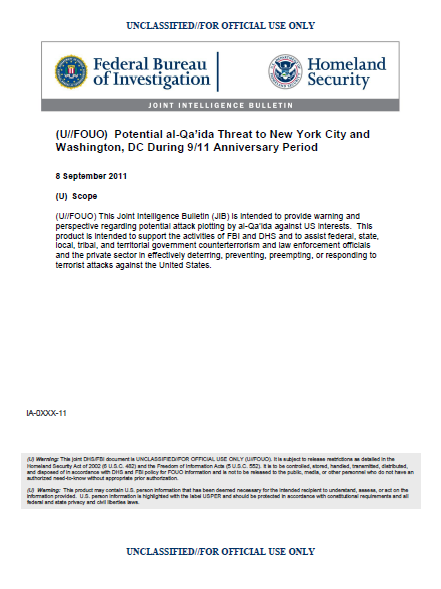 (U//FOUO) According to recently obtained information, al-Qa’ida may be planning attacks inside the United States, targeting either New York City or Washington, DC around the time of the 9/11 anniversary.

(U//FOUO) We remain concerned that terrorists and violent extremists may view the symbolism of the 10th anniversary of 9/11 as a potentially attractive date to conduct an attack—particularly in major US cities.

(U//FOUO) As of early September 2011, al-Qa’ida possibly planned to carry out attacks in either New York City or Washington, DC—including a possible car bomb attack—around the timeframe of the 9/11 anniversary; such attacks may involve operatives carrying US documentation.

— (U//FOUO) The attacks would be intended to cause panic within the public and disarray among first responders.
— (U//FOUO) We have no further information on the specific timing, targets, locations, or methods of any of the potential attacks.

(U//FOUO) We assess that al-Qa‘ida has likely maintained an interest since at least February 2010 in conducting large attacks in the Homeland timed to coincide with symbolic dates, to include the 10-year anniversary of the 9/11 terrorist attacks. We also remain concerned that the May 2011 death of Usama bin Ladin (UBL), coupled with the subsequent removal of several key al-Qa’ida figures, could further contribute to al-Qa’ida’s desire to stage an attack on a symbolic date—such as the 10-year anniversary of 9/11—as a way to avenge UBL’s death and reassert the group’s relevance, although operational readiness likely remains the primary driving factor behind the timing of al-Qa’ida attacks.

(U) Possible Attack Methods and Targets

(U//FOUO) While this specific threat reporting indicates al-Qa’ida may be considering an attack using vehicle-borne improvised explosive devices (VBIEDs)—likely similar to the tactic used by Faisal ShahzadUSPER in his attempted attack on Times Square on 1 May 2010—we assess that al-Qa’ida and its affiliates have also considered attacks with small-arms, homemade explosive devices, and poisons, and probably provide their operatives with enough autonomy to select the particular target and method of attack.

(U//FOUO) Although we have no specific information on targets other than these two cities for this particular threat stream, we assess that al-Qa’ida in general has traditionally viewed aviation, mass transit systems, and US Government and military sites as particularly attractive. We further assess that targets with large gatherings of people and that are of economic, symbolic, or political significance offer the opportunity for al-Qa’ida and its adherents to inflict mass casualties, with the added objectives of causing economic and psychological damage on the United States.

(U) Indicators of Pre-Operational Surveillance and Preparations for an Attack

(U//FOUO) We strongly encourage federal, state, local, tribal, and territorial counterterrorism officials and the private sector to remain alert and immediately report potential indicators of preoperational surveillance and planning activities at any commercial retail establishment, transportation venue, national monument or icon, or other public gathering place. Although a single indicator may constitute constitutionally protected activity, one or more might indicate pre-operational surveillance or preparation for an attack. Possible indicators include:

— (U//FOUO) Unusual or prolonged interest in or attempts to gain sensitive information about security measures of personnel, entry points, peak days and hours of operation, and access controls such as alarms or locks;
— (U//FOUO) Observation of security reaction drills or procedures; multiple false alarms or fictitious emergency calls to the same locations or similar venues;
— (U//FOUO) Use of cameras or video recorders, sketching, or note-taking in a manner that would arouse suspicion;
— (U//FOUO) Unusual interest in speaking with building maintenance personnel;
— (U//FOUO) Observation of or questions about facility security measures, to include barriers, restricted areas, cameras, and intrusion detection systems;
— (U//FOUO) Observations of or questions about facility air conditioning, heating, and ventilation systems;
— (U//FOUO) Suspicious purchases of items that could be used to construct an explosive device, including hydrogen peroxide, acetone, gasoline, propane, or fertilizer;
— (U//FOUO) Suspicious activities in storage facilities or other areas that could be used to construct an explosive device;
— (U//FOUO) Attempted or unauthorized access to rooftops or other potentially sensitive areas.

(U//FOUO) The FBI and DHS continue to work with our federal and non-federal partners to investigate this threat stream and will provide updates as appropriate. We continue to operate under the assumption that terrorists not yet identified by the Intelligence Community and law enforcement could seek to advance or execute attacks with little or no warning and urge federal, state, and local law enforcement and the private sector to maintain increased vigilance for indications of pre-operational and suspicious activity.