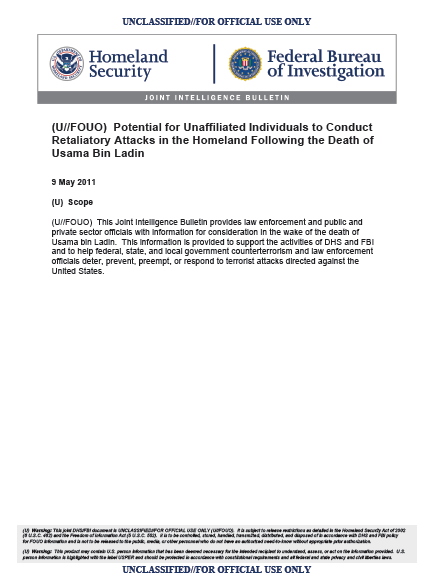 (U//FOUO) This Joint Intelligence Bulletin provides law enforcement and public and private sector officials with information for consideration in the wake of the death of Usama bin Ladin. This information is provided to support the activities of DHS and FBI and to help federal, state, and local government counterterrorism and law enforcement officials deter, prevent, preempt, or respond to terrorist attacks directed against the United States.

(U//FOUO) At this time there are no credible threats or reporting to indicate the
active planning of such an attack. Due to the high operational security and
unsophisticated tactics, lone-offender attacks are difficult for law enforcement to
detect through existing tripwires and deter.

(U//FOUO) We assess the death of al-Qa‘ida leader Usama bin Ladin is likely to provide
motivation for Homeland attacks—particularly from likeminded, ideologically focused
lone offenders using available small arms or simply constructed IEDs against familiar,
low security targets, requiring only minimal preparation. We assess that the threat from
lone offenders is the most likely near-term threat in the wake of Bin Ladin’s death since
they are unburdened by organizational constraints that can slow operational decisions
by established terrorist groups. In a 6 May statement, al-Qa‛ida said the “soldiers of
Islam” in groups and as individuals will continue to plot and plan attacks until they
succeed. However, we have no credible information to suggest that a specifically
targeted plot is underway.

(U//FOUO) Over the last year al-Qa‘ida in the Arabian Peninsula’s English-language
magazine, Inspire, and various al-Qa‘ida-affiliated spokesmen have indicated that
attacks launched by individual followers of al-Qa‘ida’s ideology can have a significant
impact. Those lone offenders unaffiliated with al-Qa‘ida, but inspired to retaliate, could
be motivated to heed the repeated calls for followers to conduct relatively simple,
individualized attacks like the attack allegedly conducted by Major Nidal HasanUSPER at
Fort Hood on 5 November 2009.

(U//FOUO) Previous attacks in the United States and on U.S. interests overseas
demonstrate the potential danger, lethality, and effectiveness of lone offenders with little
or no training.

— (U) On 1 June 2009 Carlos BledsoeUSPER, a Muslim convert, drove onto the
parking lot of a U.S. Army/Navy recruiting center in Little Rock, Arkansas, and
allegedly opened fire on two soldiers, killing one and wounding the other.

— (U) On 2 March 2011, a lone gunman boarded a U.S. Air Force bus at the airport
in Frankfurt, Germany and opened fire, killing the bus driver and one of the 15
airmen who were on their way to Ramstein Air Base before they deployed to
Afghanistan. The alleged shooter, apprehended by the German police shortly
after the assault, has online ties to other individuals with known violent extremist
views.

(U//FOUO) An extended planning cycle is not required to conduct these types of
attacks. The perpetrators rarely reveal their specific intentions in advance, providing
fewer opportunities for law enforcement to identify them and disrupt attacks before they
occur.

(U//FOUO) Lone offenders have a lower security signature due to the fact that they are not formally affiliated with a known violent extremist group, organization, or movement, and thus enjoy relative anonymity and are able to evade law enforcement scrutiny during the preoperational phase.

(U//FOUO) In many cases, lone offenders may have been formally or loosely affiliated with a recognized violent extremist organization or movement at one time, but separated from the group due to ideological or operational differences (e.g., because the lone offender’s views became notably more extreme than those of the group, or because the group was unwilling to support the level of violent tactics the individual deemed necessary to achieve objectives).

(U//FOUO) We face an increased challenge in detecting terrorist plots underway by
individuals or small groups acting quickly and independently or with only tenuous ties to
foreign handlers. Given that pre-operational indicators are likely to be difficult to detect,
state, local, tribal, territorial, and private sector partners play a critical role in identifying
and reporting suspicious activities and raising the awareness of federal counterterrorism
officials.

(U//FOUO) We encourage reporting of suspicious activity to appropriate authorities and
encourage our homeland security, military, and law enforcement partners to remain
vigilant.