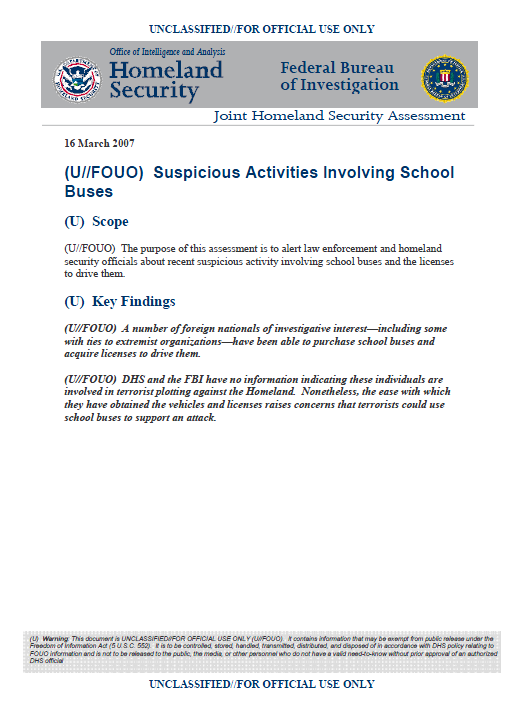 (U//FOUO) The purpose of this assessment is to alert law enforcement and homeland security officials about recent suspicious activity involving school buses and the licenses to drive them.

(U//FOUO) A number of foreign nationals of investigative interest—including some with ties to extremist organizations—have been able to purchase school buses and acquire licenses to drive them.

(U//FOUO) DHS and the FBI have no information indicating these individuals are involved in terrorist plotting against the Homeland. Nonetheless, the ease with which they have obtained the vehicles and licenses raises concerns that terrorists could use school buses to support an attack.

(U//FOUO) Most attempts by foreign nationals in the United States to acquire school buses and the licenses to drive them are legitimate. Individuals from the Middle East and South and Central America often purchase school buses to fulfill their transportation needs. For example, many foreign nationals use school buses to transport workers between job sites. Moreover, because driving is an easily transferable skill between countries, it would not be uncommon for a truck or bus driver from a foreign country to seek the same profession in the United States.

(U//FOUO) DHS and the FBI lack specific, credible intelligence indicating terrorists have been involved in procuring school buses or licenses to drive them, but several incidents raise concerns.

— (U//FOUO) Some school districts have reported an unusual increase in the number of foreign nationals seeking school bus driver positions. Subsequent FBI investigations have revealed that a number of applicants had connections to or sympathized with known terrorist groups.
— (U//FOUO) Most troublesome were individuals who the FBI reported had expressed interest in terrorist applications of explosives.

(U) Potential Use of School Buses as Weapons

— (U//FOUO) Both the 1993 bombing of the World Trade Center in New York and the 1995 bombing of the Alfred P. Murrah Federal Building in Oklahoma City used trucks containing large quantities of explosives.
— (U//FOUO) Overseas terrorist bombings using large, explosives-laden vehicles include Khobar Towers in Saudi Arabia in 1996; U.S. Embassies in Kenya and Tanzania in 1998; and commercial, religious, and government buildings in Turkey in 2003, among others.

(U//FOUO) DHS and the FBI lack specific, credible intelligence indicating terrorists plan to use school buses as VBIEDs, but these vehicles have the capacity to carry large amounts of explosive material.

— (U//FOUO) Security surrounding school buses is generally relaxed. School bus parking lots often are unlocked and are not consistently monitored; some lots are unfenced and keys are often left in the buses so they can be moved quickly.

(U//FOUO) School bus drivers are required to have a commercial driver’s license (CDL), but CDL requirements vary among states. DHS has previously published an assessment on how terrorists could exploit the CDL licensing system. Background checks for school bus drivers also vary from state to state; most require at least a state or FBI criminal check. Washington State, however, issues CDLs without proof of residency or legal status.

(U//FOUO) Once applicants obtain a CDL to drive large vehicles such as buses or trucks, they become eligible to apply for a hazardous material endorsement (HME) to legally transport hazardous materials. Instances continue to surface of individuals fraudulently obtaining valid CDL and HME credentials.

(U) Indicators of Suspicious Activities

(U//FOUO) Law enforcement should be aware of the following indicators of possible terrorist interest in school buses, CDLs, and HMEs: