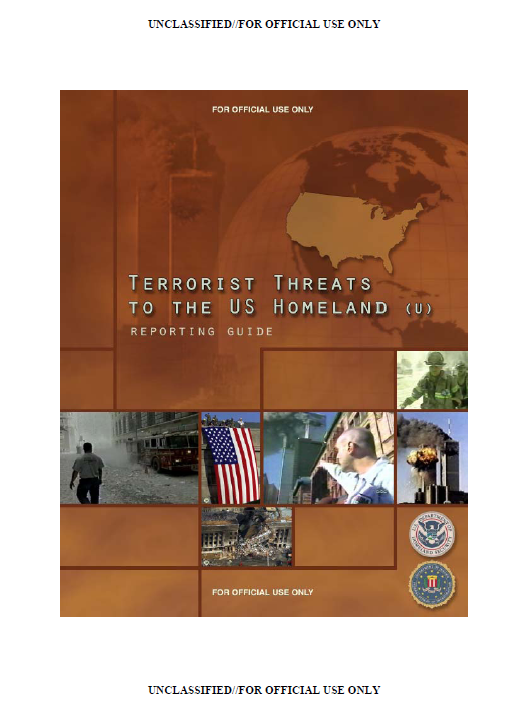 This Terrorist Threats to the U.S. Homeland Reporting Guide (TTRG) was jointly produced by the Federal Bureau of Investigation (FBI) and the Department of Homeland Security (DHS). The purpose of this document is to leverage the vast information collection and reporting resources of our state, local and tribal law enforcement partners, as well as other first responder partners, in recognizing activities or conditions that may be indicative of terrorist activity. State and local organizations are on the front line in the war against terror and therefore have a critical role as primary sources of information. Timely and relevant information from the “front lines” is critical to the identification of terrorists and their supporters, development of insights into their plans and intentions, and subsequent disruption of their operations.

Al-Qaida and its affiliated elements within the Sunni extremist movement pose the greatest terrorist threat to the U.S. Homeland. The number of individuals and groups who subscribe to the al-Qaida philosophy, the breadth of their recruitment base, their ability to operate clandestinely on a global scale, their strong anti-American sentiment, and their demonstrated willingness to inflict large numbers of casualties portend a persistent threat, notwithstanding significant counterterrorist successes.

Types of individuals that may be targeted for recruitment in the United States, and their qualifications

Entities that may be actively working with terrorist groups

Indicators/Reportable Items:
• Providing material support (e.g., funding, arms, safe havens, false documents, personnel support) to terrorists by a foreign entity
• Relations with states where terrorists are believed to be located and protected
• Identities and descriptions of non-traditional cover agents in the United States affiliated with state sponsors of terrorism
• Attendance at events sponsored by governments known to support terror
• Frequent travel by staff members or leaders to terrorist safe havens or territory controlled by state sponsors
• Non-governmental organization (NGO) staff composed of individuals with ties to or membership in terrorist-related organizations
• Granting of special favors to suspect individuals or groups by a foreign entity or NGO (e.g., monetary grants, debt relief, training, status, bona fides)
• Contacts with foreign intelligence and security services or affiliates for the purpose of information sharing, training, financing and logistical support
• Material support to individuals or groups affiliated with anti-U.S. terrorist activities
• Communications/contacts between members of established groups or state sponsors and splinter/surrogate groups
• Direct or indirect contacts or affiliations between terrorists and NGOs
• Suspicious financial transactions involving NGOs who arrange travel for staff, consultants, aid workers or students
• Frequent foreign travel to area(s) of concern

Indicators/Reportable Items:
• Exclusive use of public telephones
• Speaking in coded or general terms while speaking on the telephone
• Breaking a telephonic conversation flow by calling back on another line
• Frequent change in cell phones or use of “disposable” cell phones
• Conducting periodic examinations of the telephone wire and receiver
• Presence of coded telephone numbers disguised as prices for shopping lists or item serial numbers
• The use of authentication techniques to confirm the identify of the called party
• Sudden discontinued use of a telephone number or email account (on the assumption its use is no longer secure)
• Use of operative courier for message delivery
• Use of steganography (i.e., hiding information by embedding messages within other, seemingly harmless, messages)
• Postmarking letters from a distant post office rather than a local one
• Personal letters received from abroad addressed to P.O. boxes or to other individuals or locations other than the individual’s place or residence
• Cloaking or disguising email so messages appear blank (i.e., use of different font or background colors or coded using different language/font settings)
• Email account contains mail in “Drafts” folder but does not transmit email
• Instructions to operatives not to use a method of communication that has been detected by law enforcement or the intelligence community
• Exclusive use of calling cards