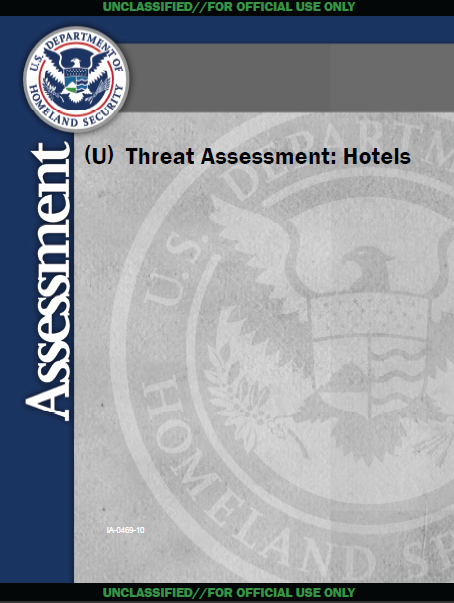 (U//FOUO) This assessment is intended to support the activities of DHS and to assist federal, state, and local government counterterrorism and law enforcement officials, and the private sector in deterring, preventing, preempting, or responding to terrorist attacks against soft targets such as hotels in the United States. It is intended to support the national “See Something, Say Something” campaign.

(U//FOUO) There is no evidence of specific threats to hotels in the United States,
but terrorists have targeted overseas hotels serving Westerners and have regularly
threatened attacks on U.S. soil.

— (U//FOUO) While this assessment focuses on recent terrorist attacks against
hotels, terrorists could potentially use similar tactics for attacks against other
soft targets.

(U//FOUO) DHS encourages security and law enforcement personnel at U.S. hotels
to remain alert for potential indicators of terrorist activity and to implement a
variety of protective measures.

(U) The United States Is An Enduring Target

(U//FOUO) The United States faces enduring but evolving threats from terrorists intent
on attacking the Homeland. Public statements by al-Qa‘ida leaders and spokesmen
regularly threaten attacks on U.S. soil. Al-Qa‘ida in the Arabian Peninsula regional
commander and prominent ideologue Anwar al-AulaqiUSPER and al-Qa‘ida media official
Adam GadahnUSPER have called for Westerners to conduct simple, small-scale attacks
against familiar targets in local areas that do not require extensive support and training.
This message has been reinforced by Inspire magazine, an English language online
magazine reportedly published by al-Qa‘ida in the Arabian Peninsula. Preparations and
planning for such attacks are often difficult to detect.

(U//FOUO) In targeting hotels serving Westerners, terrorists are probably motivated by
several factors, some of which also apply to other lightly secured or publicly accessible
targets in the United States:

— (U//FOUO) The relatively open and public nature of hotels makes them
potentially an easier target to access than other facilities with perimeter security
and checkpoints, such as government or military facilities.

(U) Indicators of Possible Suspicious Activity

(U//FOUO) Operatives associated with many of the hotel attacks overseas behaved in
ways that are indicative of suspicious activity. Security and law enforcement personnel
at U.S. hotels should be alert to potential indicators of terrorist activity, to include
avoiding questions typically asked of hotel registrants, showing unusual interest in hotel
security, attempting access to restricted areas, and evading hotel staff.

(U//FOUO) Although many of these behaviors may be innocuous by themselves, the
observation of multiple indicators may represent—based on the specific facts or
circumstances—possible suspicious activity at hotels:
— (U//FOUO) Not providing professional or personal details on hotel
registrations—such as place of employment, contact information, or place of
residence.
— (U//FOUO) Extending departure dates one day at a time for prolonged periods.
— (U//FOUO) Refusal of housekeeping services for extended periods.
— (U//FOUO) Extended stays with little baggage or unpacked luggage.
— (U//FOUO) Access or attempted access to areas of the hotel normally restricted
to staff.
— (U//FOUO) Multiple visitors or deliveries to one individual or room.
— (U//FOUO) Unusual interest in hotel access, including main and alternate
entrances, emergency exits, and surrounding routes.
— (U//FOUO) Use of entrances and exits that avoid the lobby or areas with cameras
and hotel personnel.
— (U//FOUO) Attempts to access restricted parking areas with a vehicle or leaving
unattended vehicles near the hotel building.
— (U//FOUO) Unusual interest in hotel staff operating procedures, shift changes,
closed-circuit TV systems, fire alarms, and security systems.
— (U//FOUO) Leaving the property for several days and then returning.
— (U//FOUO) Abandoning a room and leaving behind clothing, toiletries, or other
items.
— (U//FOUO) Noncompliance with other hotel policies.
— (U//FOUO) Interest in using Internet cafes, despite hotel Internet availability.
— (U//FOUO) Non-VIPs who request that their presence at a hotel not be divulged.
— (U//FOUO) Use of cash for large transactions or a credit card in someone else’s
name.
— (U//FOUO) Requests for specific rooms, floors, or other locations in the hotel.
— (U//FOUO) Use of a third party to register.