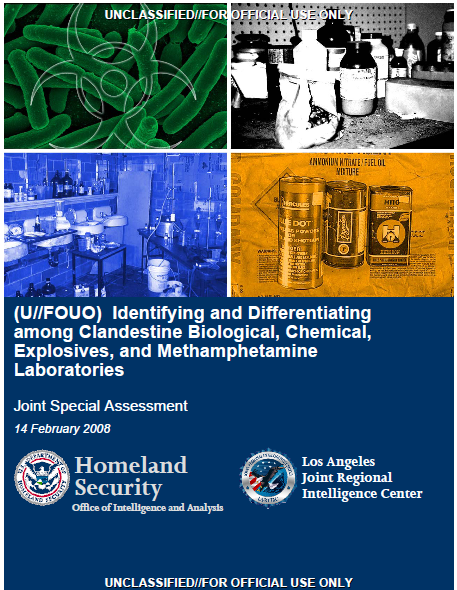 (U//FOUO) The purpose of this assessment is to assist members of the law enforcement and public safety communities in differentiating among four types of clandestine laboratories: biological, chemical, explosives, and methamphetamine. It provides descriptions, distinguishing features, and hazards of each type of laboratory and includes four reference guides for distribution to public safety personnel. This assessment expands on a related product—Distinguishing a Biological Agent Production Laboratory from a Methamphetamine Laboratory, Lawrence Livermore National Laboratory, 22 January 2008—by including indicators and warning signs associated with clandestine chemical and explosives laboratories.

(U//FOUO) The size of the labs varies depending on the scale of production. Smaller labs operate out of abandoned buildings, apartments, barns, cars, garages, hotels, private homes, travel trailers, trucks, vans, and even outdoor camps for quick assembly and disassembly. Superlabs require more space, and are often located in remote areas. Equipment found at superlabs can include commercial laboratory glassware and heating mantles as well as improvised equipment such as trashcans and large buckets. Household glass and plastic storage containers are more likely tools at user labs.

(U//FOUO) Methamphetamine production comprises three stages: cooking, separating, and crystallization. In the cooking stage, manufacturers heat the ephedrine or pseudoephedrine in the presence of other chemicals, which results in methamphetamine (see text box above). Manufacturers may use a commercial heating mantle, deep-fat fryer, hot plate, or camp stove for cooking. In the separation stage, the cooked mixture is combined with other chemicals to create liquid, or “free base” methamphetamine. The liquid is separated from unwanted solids using a drain or filter. The liquid methamphetamine is converted to a solid in the crystallization stage by reacting the free base with hydrochloric acid. The resulting wet solid is then dried, a process that can include literally wringing the wet methamphetamine in a mop bucket or drug press.

Some labs include a fourth stage during which the methamphetamine powder is exposed to acetone or other solvent to create crystal methamphetamine, or “ice.”

(U//FOUO) Homemade explosives can be manufactured almost anywhere since they typically require little specialized equipment. Recipes are widely available on the Internet and in anarchist literature and tend to use chemicals readily available at drugstores and hardware stores. Basic ingredients are fuel and an oxidizer (see Appendix B, Table 1). These are either physically mixed or chemically reacted to create an explosive. All explosives are sensitive to electrostatic charge, friction, heat, and shock; therefore, bombmakers sometimes manufacture the more sensitive ones in a cold environment, such as an ice bath, to prevent explosion. Binders such as grease, motor oil, petroleum jelly, and wax desensitize explosives hold mixtures together.

(U//FOUO) Once manufactured, bombmakers can incorporate homemade explosives into improvised explosive devices (IEDs). Electrically initiated IEDs require a power source, such as a battery, an initiator, at least one switch, and wires. Non-electrically initiated IEDs require a non-electric source of initiation such as a percussion primer or a time fuse. In either case, fragmentation and shrapnel can be added to increase lethality.

(U) Biological and Chemical Clandestine Laboratories

(U//FOUO) Biological and chemical warfare agent laboratories are the least prevalent type of lab; however, because of the potential for mass casualties and panic and the continued interest in these agents by terror groups, they are of great concern.* The sophistication of the warfare agent lab depends on the agent being made, with simple agents like cyanide gas and ricin requiring far less equipment and skill to produce than complex agents like Yersinia pestis, the causative agent of plague, or sarin nerve gas. Sophisticated biological and chemical laboratories often are characterized by commercial laboratory equipment, reactor vessels, and ventilation and sterilization systems. Attempts to produce warfare agents in less sophisticated laboratories may lead to accidental release of an agent, explosion, or fire.

(U//FOUO) The two broad categories of biological agents are pathogens and toxins. Pathogens are disease-causing microorganisms, which include bacteria, rickettsia, and viruses (see Appendix B, Table 2). Infectious human strains of pathogens are commercially available and can be found in academic and medical research facilities. Pathogens also can be isolated from the environment; for example, Bacillus anthracis, the causative agent for anthrax, is found in soil.

(U//FOUO) Toxins are harmful substances produced by animals, living organisms, microbes, or plants. Toxins differ from chemical agents because they are naturally occurring, non-volatile, usually do not affect the skin, and may be much more toxic than chemical agents. One of the more widely available toxins is ricin, which can be extracted from the ubiquitous castor bean.

(U//FOUO) Agent acquisition can be a major hurdle to developing a biological agent. After acquisition, pathogens or toxin-generating organisms must be grown to create sufficient quantities of agent for dispersal. Initial growth, or culturing, typically occurs on agar plates for bacteria and in flat-bottomed flasks for viruses. This creates the seed culture for a larger production process that involves vessels such as bioreactors, eggs, and fermenters. Further processing to weaponize an agent is not required, but could lead to a more refined and easier to disperse product.

(U//FOUO) Biological agents can be disseminated in a number of ways, either via a liquid or dried agent. Liquid agents can be aerosolized using commercial sprayers, crop dusters, and modified fire extinguishers. Agents also can be dried and milled for more effective dissemination. Dried powder that rapidly disperses or disappears at the slightest touch or contact with moving air may indicate a weapons grade agent and should be regarded as extremely dangerous.

(U) Domestic incidents involving biological agents include the following:

— (U) In 1984 a religious cult led by Bhagwan Shree Rajneesh sickened more than 700 people in Oregon by contaminating salad bars with Salmonella typhimurium.

— (U//FOUO) Between 1993 and 2007, at least 14 confirmed ricin incidents occurred in the United States involving domestic individuals or groups that adhere, affiliate, or sympathize with a radical extremist ideology.

— (U) In 2001 an unidentified individual or group caused 22 cases of anthrax, with
five fatalities, by mailing letters containing Bacillus anthracis.

(U//FOUO) Chemical warfare agents fall into five categories: blister, blood, choking, incapacitating, and nerve. These agents sometimes can be identified by their color or smell (see Appendix B, Table 3). Some agents are commercially available toxic industrial chemicals, such as chlorine and phosgene. Most chemical warfare agents, however, are not commercially available and require production.

(U//FOUO) The first of three general steps in the production cycle is chemical reaction, or synthesis. Synthesis requires a reaction vessel, often glass or metal, that is sometimes connected to other equipment such as a heat source, mixer, pressurized gas container, or water source. The next step is purification through distillation, evaporation, physical separation, or washing. This may require filtration equipment, glass containers connected to hoses, and a heat source. The final step is analysis to confirm the identity and lethality of the isolated compound, often accomplished by using chemical agent detection kits or live animals. Depending on the agent, purification and analysis are optional steps.

(U//FOUO) As with biological agents, chemical agents can be weaponized in a number of ways, including via aerosolized release. Chemicals also can be mixed with creams and solvents, such as dimethyl sulfoxide, to create contact poisons.

(U//FOUO) Attempts to use homemade chemical weapons domestically have to date been small-scale, typically perpetrated by individuals or small groups. A cell of Islamic extremist terrorists in Bahrain in 2003 reportedly developed a cyanide gas dispersion device they called a “mubtakar” that they intended to use against New York City’s subway system. Globally, the largest terrorist attack using a manufactured chemical agent was the March 1995 sarin nerve gas release on the Tokyo subway system by the Japanese cult Aum Shinrikyo, which resulted in 12 deaths. 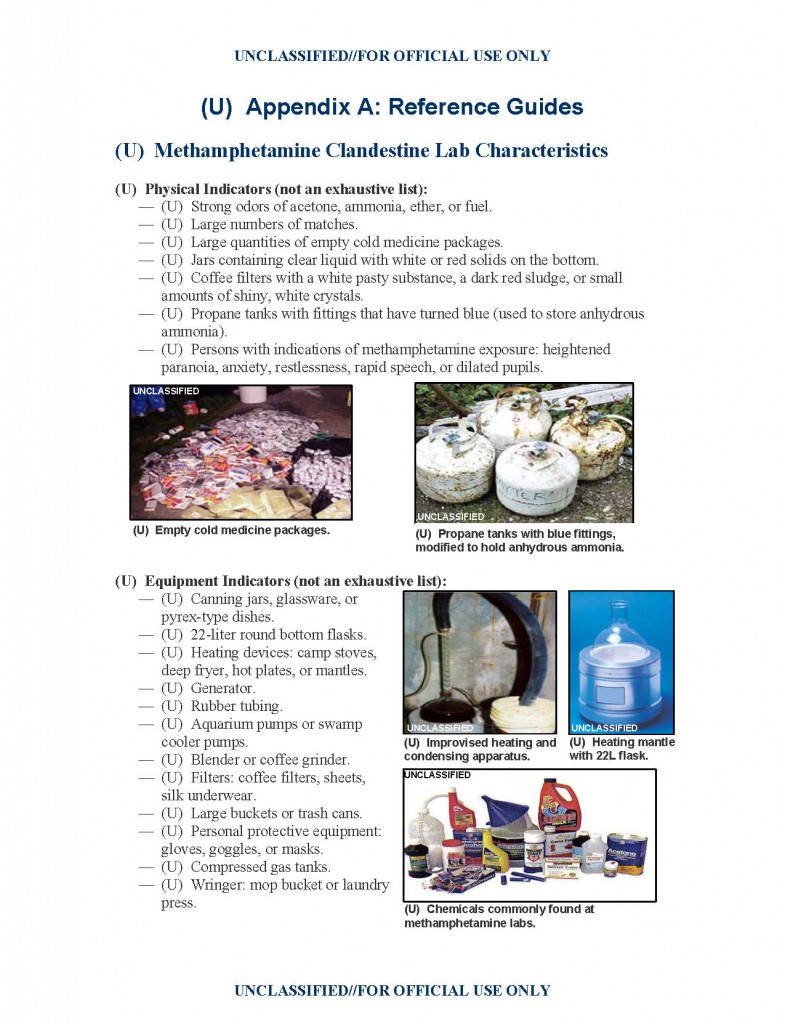 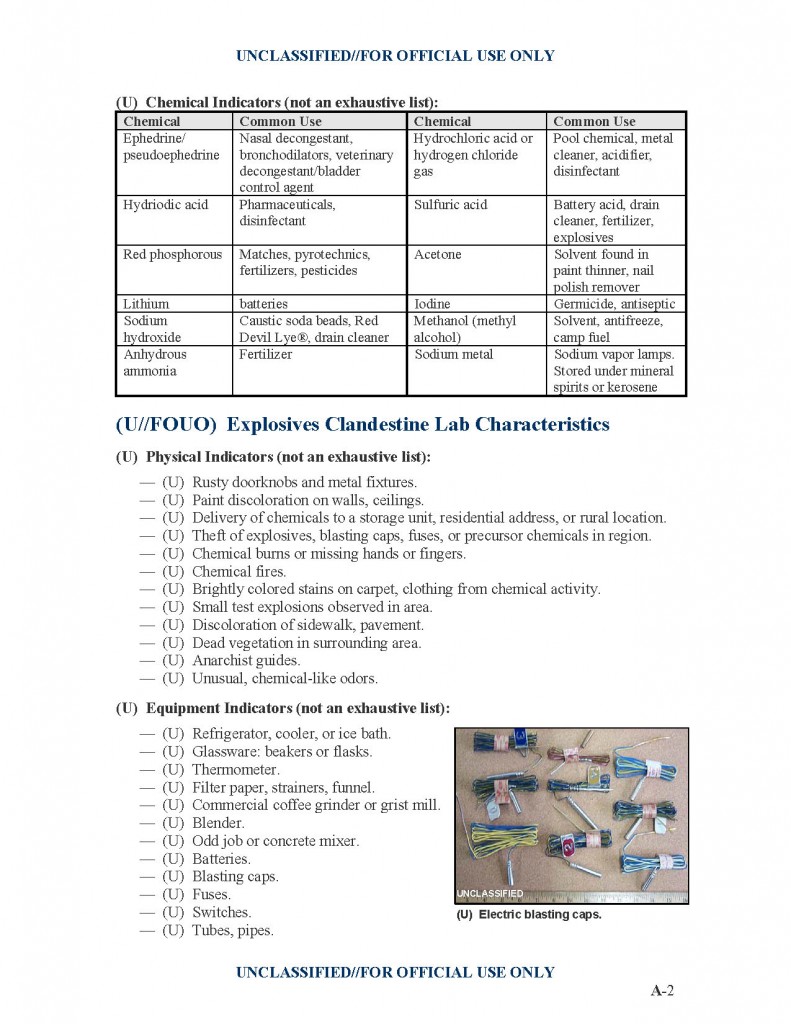