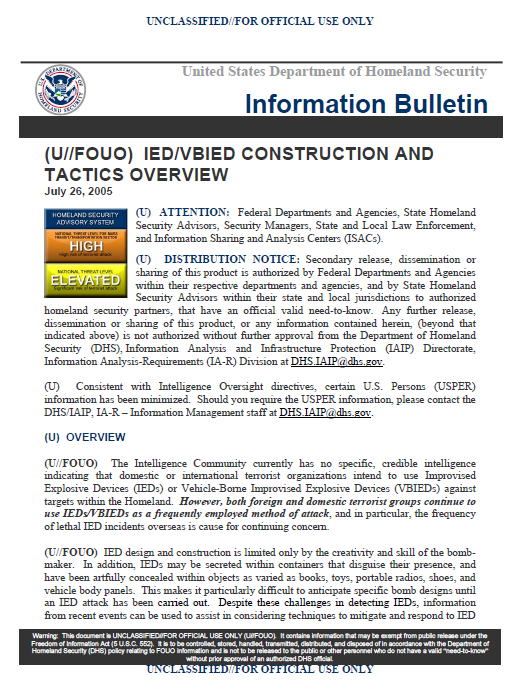 (U//FOUO) The Intelligence Community currently has no specific, credible intelligence indicating that domestic or international terrorist organizations intend to use Improvised Explosive Devices (IEDs) or Vehicle-Borne Improvised Explosive Devices (VBIEDs) against targets within the Homeland. However, both foreign and domestic terrorist groups continue to use IEDs/VBIEDs as a frequently employed method of attack, and in particular, the frequency of lethal IED incidents overseas is cause for continuing concern.

(U//FOUO) IED design and construction is limited only by the creativity and skill of the bombmaker. In addition, IEDs may be secreted within containers that disguise their presence, and have been artfully concealed within objects as varied as books, toys, portable radios, shoes, and
vehicle body panels. This makes it particularly difficult to anticipate specific bomb designs until an IED attack has been carried out. Despite these challenges in detecting IEDs, information from recent events can be used to assist in considering techniques to mitigate and respond to IED incidents.

(U//FOUO) Specific attention must be paid towards the possibility of secondary IEDs designed to attack first responders coming to the scene of an initial IED attack. All IED mitigation and response plans must include the possibility of secondary device attack. An IED or VBIED attack may use a single device of one type, several similar devices, or combinations of IEDs and VBIEDs. There are instances where IEDs are used in conjunction with direct fire (e.g. small arms and rocket-propelled grenades) to produce combined-arms effects on the target.

(U//FOUO) All IEDs and VBIEDs consist of four basic elements: 1) power supply, 2) initiator, 3) explosives, and 4) switch / sensor. The effectiveness of the IED is not solely associated with the amount of explosives used; rather each IED should be considered as a complete weapon system. Each element can be crude or sophisticated, depending upon the skill and resources available to the bomb maker.  By tailoring each element the device can be specifically designed to result in a deadly effect.

(U//FOUO) Recent concerns regarding cell phones as IED “switch/sensor” components have led some jurisdictions to deactivate cellular communications relays. Although this may prevent the use of the cell phone as a remote control device, they can still be used as IED components. Many cell phone models include an electronic timer feature, as used in the March 2004 Madrid train bombings. The deactivation of cellular communications systems may not eliminate the possibility of cell phone use in IED construction.