A poorly photocopied version of this bulletin was previously released by CBS. 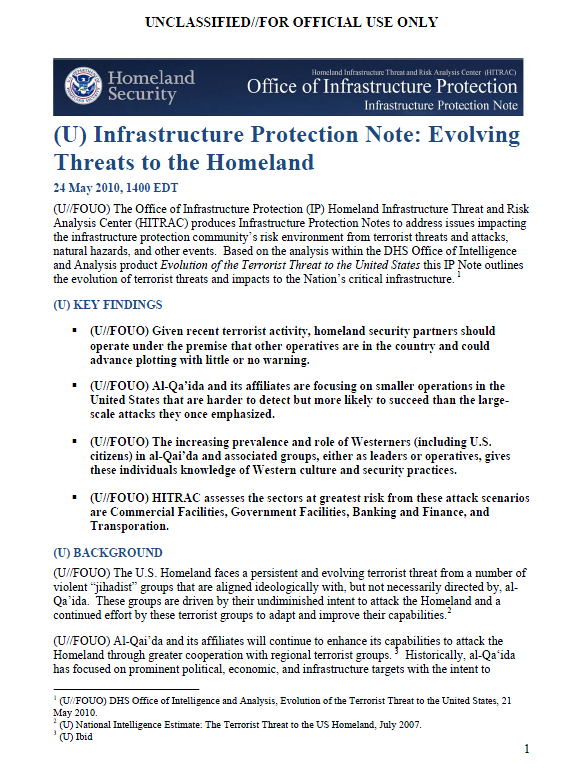 (U//FOUO) The U.S. Homeland faces a persistent and evolving terrorist threat from a number of violent “jihadist” groups that are aligned ideologically with, but not necessarily directed by, al-Qa’ida. These groups are driven by their undiminished intent to attack the Homeland and a continued effort by these terrorist groups to adapt and improve their capabilities.

(U//FOUO) Al-Qai’da and its affiliates will continue to enhance its capabilities to attack the Homeland through greater cooperation with regional terrorist groups. Historically, al-Qa‘ida has focused on prominent political, economic, and infrastructure targets with the intent to produce mass casualties, visually dramatic destruction, significant economic aftershocks, and fear among the population. The group is innovative in creating new capabilities and overcoming security obstacles.

(U) Potential Attack without Warning

(U//FOUO) There is an increased challenge in detecting terrorist plots underway because of the current trend and tactics which use individuals or small groups acting quickly and independently or with only tenuous ties to foreign handlers. State, local, tribal, and private sector partners play a critical role in identifying suspicious activities and raising awareness of federal counterterrorism officials.

(U//FOUO) Given recent terrorist activity, homeland security partners should operate under the premise that other operatives are in the country and could advance plotting with little or no warning.

(U) Increased Frequency of Attacks Possible

(U//FOUO) Recent events suggest a trend in which terrorists seek to conduct smaller, more achievable attacks against easily accessible targets. Within the past year, attempted attacks and plots in the United States progressed to an advanced stage largely because of these groups’ ability to use operatives that have access to and familiarity with the U.S. as well as their use of new and varied attack patterns.

(U//FOUO) The evolving threat and increasing resilience of al-Qa’ida and other terrorist organizations have been highlighted by a number of recent domestic events, including the Times Square bombing attempt, the Fort Hood attack and the December 2009 airline bomb plot. The number and pace of attempted attacks against the United States over the past nine months have surpassed the number of attempts during any other previous one-year period.

(U) Globalization trends and recent technological advances will continue to enable even small numbers of alienated people to find and connect with one another, justify and intensify their anger, and mobilize resources to attack – all without requiring a centralized terrorist organization, training camp, or leader.

(U//FOUO) The increasing prevalence and role of Westerners (including U.S. citizens) in al-Qai’da and associated groups, either as leaders or operatives, gives these individuals knowledge of Western culture and security practices. U.S. persons who hold leadership positions in al-Qai’da and associated groups have also called publicly on Western individuals to wage jihad by conducting attacks locally.

(U//FOUO) The analysis below builds on these judgments by identifying the relative risk of attacks given the vulnerabilities and potential consequences of an attack on specific CIKR sectors.