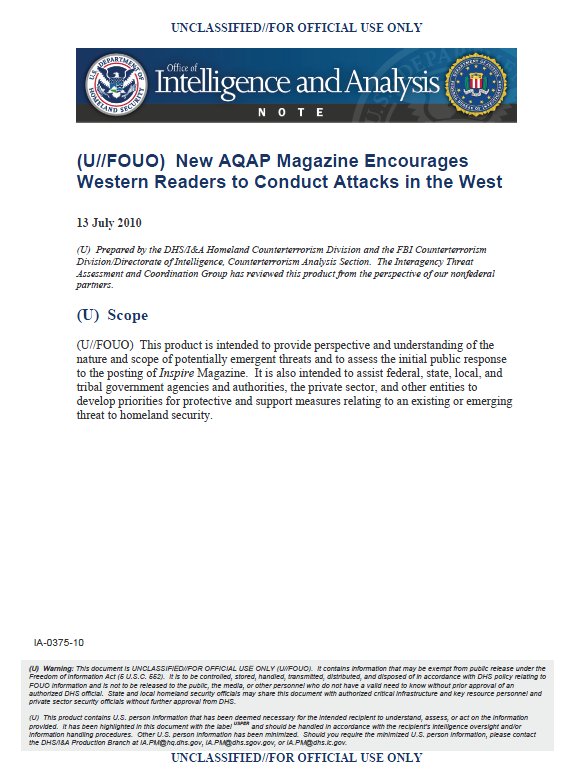 (U//FOUO) This product is intended to provide perspective and understanding of the nature and scope of potentially emergent threats and to assess the initial public responseto the posting of Inspire Magazine. It is also intended to assist federal, state, local, and tribal government agencies and authorities, the private sector, and other entities to develop priorities for protective and support measures relating to an existing or emerging threat to homeland security.

(U//FOUO) On 11 July 2010, al-Qa‘ida in the Arabian Peninsula (AQAP) published the first edition of an English-language online magazine, Inspire, which encourages Western readers to conduct attacks in the West and to join the “jihad.” There has been limited reaction posted in response to the magazine’s release; however, the magazine has been replicated on several social media Web sites.

— (U//FOUO) Al-Wahishi, in what is described as an exclusive interview for Inspire, states that America’s actions “require us to wipe them out of the map completely. America is a cancer that needs to be removed along with the West.” Al-Wahishi advises Muslims in the West to “acquire weapons and learn methods of war” and states that Muslims in the West are “living in a place where they can cause great harm to the enemy.”

— (U//FOUO) In a section titled, “The Dust Will Never Settle Down Campaign,” AQAP provides a “hit list” of individuals associated with defaming the prophet Mohammed and Islam. As part of the campaign, al-Aulaqi claims the proper response to Western defamation of Islam “is the execution of those involved” and that “assassination, bombings, and acts of arson” are legitimate tactics. Al-Aulaqi also says “any Western target [is] legal from an Islamic viewpoint.”

— (U//FOUO) Included in the section called “Open Source Jihad”—referred to by AQAP as “America’s worst nightmare”—is an article titled, “Make a Bomb in the Kitchen of Your Mom.” The article provides general step-by-step instructions for constructing a pipe bomb using readily accessible items that could be acquired without arousing suspicion.

(U//FOUO) The DHS/Office of Intelligence and Analysis (I&A) and the FBI have no information to indicate AQAP or its followers are planning an attack in coordination with the publication of this magazine. As of 13 July 2010 at 1400 EDT, the DHS Open Source Enterprise found no individuals stating their intent to conduct violent actions in response to the Inspire publication. DHS/I&A and the FBI are concerned, however, that the sophisticated, colloquial English-language magazine could appeal to certain Western individuals and inspire them to conduct attacks in the United States in the future. As AQAP’s first official publication geared towards English-speaking readers, Inspire reflects the group’s interest in reaching a Western audience and is a significant addition to the group’s media campaign. DHS/I&A and the FBI encourage the reporting of suspicious activity to appropriate authorities and vigilance on the part of our homeland security, military, and law enforcement partners.